I first flew in an aeroplane the summer after I turned ten. And I did it with bells on, as an unaccompanied minor between Aberdeen and Birmingham on my way to spend the summer with my grandfather. It was a day of firsts; the second first came during the flight stopover at Edinburgh airport when the air hostess (we call them cabin crew these days) took me off the plane and bought me my first taste of Edinburgh Rock. The third first was when I was invited into the cockpit, and the pilot allowed me to ‘press the button that landed the plane’.

It was years before I realised that planes don’t have such a button, but in that moment, I had never felt more important. 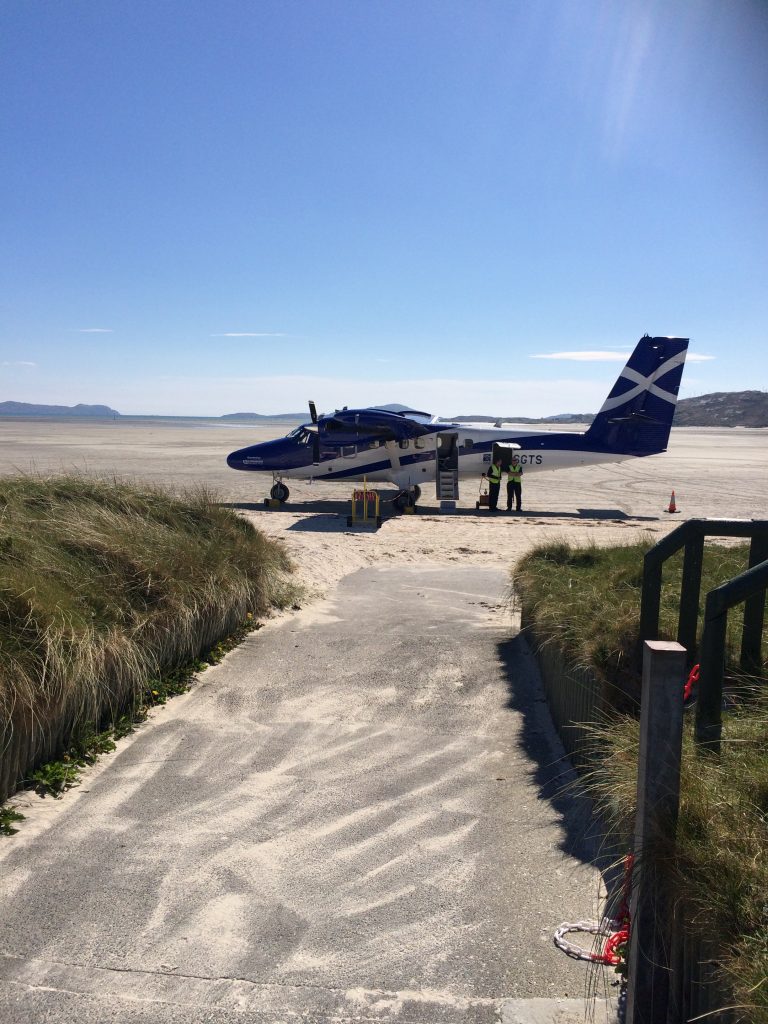 Preparing for take-off from Barra Beach

I have flown countless times since and the thrill of that first flight has never been replicated. There was a certain frisson when I touched down on the beach on Barra – that most famous of landings, in which a Twin Otter (little more than a minibus with wings) lands on the golden expanse of Traigh Mhor beach. But my excitement levels were high again a couple of Saturdays ago, when I managed to wangle myself a seat in the cockpit for Loganair’s regular scheduled flights between the Highland Capital and the Northern and Western Isles. 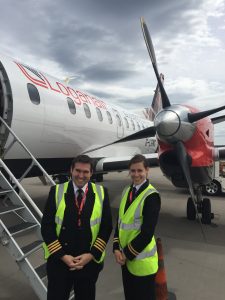 Captain Tim Curwen and First Officer Kristy Evans beside their Loganair Saab340, The Spirit of Islay.

Invited to shadow Captain Tim Curwen and First Officer Kristy Evans on their eight-hour shift, I jumped at the chance.  I took a fully charged phone and a portable charger, and even with unkind weather (Kristy, our straight-talking 29-year-old Aussie born First Officer, officially declared it as ‘pish’) I took so many photos that I drained both batteries.

The experience was awesome. And now I am wondering whether it’s too late to train for a new career.

First, the science bit. We were on a Saab 340, a 33-seater twin-prop plane with a top speed of 300 mph. Covering around 700 miles in a flying time of just over three hours, and with a maximum cruising altitude of 14000 feet, a total of 108 passengers (who ordered a modest 43 cups of tea but ate 46 Caramel Wafers) were transported using 1425 kilos of aviation fuel. 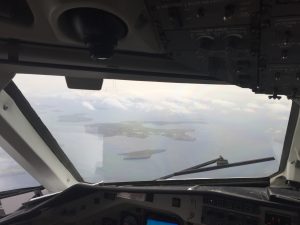 The islands of Orkney appearing through the clouds

Our itinerary involved an early morning departure from Inverness to Kirkwall, then onto Shetland. That route was reversed, giving us time for a quick coffee and sandwich back in Inverness airport before a return flight across the Minch to Stornoway. That’s six take-offs and six landings. Despite the number of times I witnessed exactly the same procedures being followed, and despite the patient explanations I got of what was happening at each juncture, I couldn’t even begin to work out which of the 300-odd buttons needed to be pressed, and in which order.

With 300 buttons, two pilots and two identical sets of flight controls there’s hardly room for another person in the cockpit. My seat for the day was the ‘jump-seat’; a folding chair which sits in front of the door to the cockpit behind the pilots. With a headset I was invited to join in and ask questions, but it was clear that there was little time for interruptions; there was a serious amount of work to be done.

The level of communication was impressive; between Captain and First Officer, and between the cockpit and the local and national air traffic control centres, ground staff, weather services, the radar centre and cabin crew. Nothing was assumed. Every check was carried out and confirmed and every decision discussed and agreed. With over 100 pilots flying Saab 340s around the Loganair flight network, and with complicated shift patterns which include both passenger and mail planes, pilots who have never met may find themselves flying together. The systems and safety checks are the same each time, no matter who is on board. It’s reassuring to know that no short-cuts are taken.

Rain and poor visibility couldn’t dampen my spirits, and the glimpses I caught of the Highlands and Islands through the mist gave me a hint of what it could have been like. Rubbing it in, Tim and Kristy told me the sights they have seen from Loganair cockpits; sunsets, golden beaches, azure seas, whales, aurora and shooting stars. They’ll need to send me photos…

Next time I fly I won’t be in the cockpit, I’ll be in the body of the plane where I belong. But having had that insight, my image of flight has changed forever. Despite Captain Curwen refusing to let me press the button to land the plane…

This post first appeared in Seven Days, published by SPP and issued with The Inverness Courier, The Northern Scot and four other titles across the north of Scotland, week ended 6th July 2018.