“What’s an InterRail pass?”, I hear you ask. Good question! It’s a ticket which allows for free train travel – plus some ferry and air travel too – on almost all rail networks in 30 European countries, but excluding your country of residence. A one-month unlimited pass across all EU countries would normally set an under 27-year-old back by around £500, so for teens keen to travel, this is a brilliant opportunity.

The only catch (but it’s hardly a catch at all) is that travelling teens will be expected to share their adventures on social media as they go. Most would be doing that anyway. And there is another tiny catch; the 30,000 passes are allocated among EU countries according to population so only 1,900 will be coming to the UK. There are around 715,000 18-year olds in Britain, so luck will play a large part in whether you get a ticket. And if you are lucky you might end up travelling solo, because the chances of your mates being lucky too are slim. 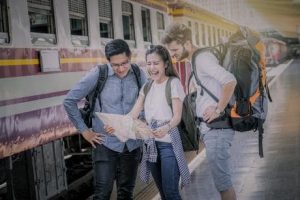 But why are the European Commission being so generous? Their aim is to celebrate the freedom of travel that Europeans enjoy across the region’s borders. But it’s also about broader minds; giving young people the chance to discover all that they can about the cultures and traditions of their fellow Europeans. Greater understanding leads to greater tolerance. This much we know.

Isn’t that fantastic? Until we remember that for young Brits, 2018 is their one-time-only chance.  We’ll be out of the EU by next summer. That’s a real slap in the face for current 16 and 17-year olds…

I never did the full-on InterRail ‘two-pairs-of-shorts-for-a-month-and-washing-in-fountains’ experience, but I did do a fair amount of solo travel around Europe as a teen, mostly to and from jobs (and then to stay with the families of the folk I’d worked with), and mostly by train. If nothing else, it taught me three things:

We have encouraged our daughters to travel and see as much of the world as they can. One has taken that completely to heart, and has lived, volunteered and worked (so far) in Honduras, India and The Netherlands. Based in Utrecht she zips around Europe on €8 flights staying in €10 hostels. The experiences she has gained from this are immeasurable. Our younger daughter worked in Greece last summer and is heading back there next month. Her self-confidence has grown in ways that it couldn’t have, had she stayed closer to home.

Travel is not just great fun, it helps us all to grow and learn. And it makes us more tolerant of others when we experience their cultures first-hand. Britain is an island. We are already cut off from our neighbours. Closing ourselves and our young people off to another – albeit small – opportunity to enjoy free travel, open borders and to work abroad, will only isolate us further. The nearer we get to March 2019 the more I despair.

This post first appeared in Seven Days, published by SPP and issued with The Inverness Courier, The Northern Scot and four other titles across the north of Scotland, week ended 11th May 2018.