Let’s get straight to it. I am no armchair sports fan. Apart from downhill skiing and speed skating in the Winter Olympics, watching sport on the telly just doesn’t interest me. I might occasionally join friends in the pub on Six Nations match days, but that’s more for the chat than the rugby. It would be fair to say that at best I’m ambivalent, at worst I’m bored by it all.

When sports reports come onto the TV or radio news I glaze over; and the back pages of newspapers are a mystery to me. The only Ross County player I can name is Coll Donaldson, and that’s because I’m friends with his Mum and I remember him from when he was a baby.

Why do we watch violence and call it entertainment? 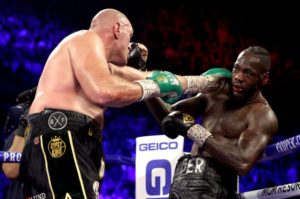 But on Sunday evening when I was ironing in front of the BBC TV news, I was sickened by an excited, glamourizing report live from Las Vegas about that morning’s fight between Tyson Fury and Deontay Wilder. Watching two grown men trying to beat the life out of each other was bad enough. But the language that was used to celebrate the violence (‘destructive performance’ and ‘pummelled his rival’), turned me cold.

I accept that I’m not the target audience for heavyweight boxing, but in what parallel universe can it be ‘entertainment’ to watch two people fight with the express purpose of causing injury? Yet there’s obviously a market for it – the ticket-price for the ring-side seats was eye-wateringly high, and the fight was broadcast all over the world.

Outside Johnny Foxes, one or both would have been arrested

But let’s, for a second, remove the hype, the big bucks and the sensationalism. If the fight had been between two lads outside Johnny Foxes on Saturday night instead of in an arena in Las Vegas, one or both would have ended up being arrested. Alarmingly, Wilder wasn’t available for the post-fight press conference with the world’s media because he had been taken to hospital for treatment after blood was seen dripping from his left ear.

The same BBC news report then visited the gym in Manchester where Tyson Fury had trained as a young boy. They interviewed Fury’s first coach, and junior members of the club who were clearly in awe of this self-styled ‘Gypsy King’. It’s true, for someone to have come from those same roots to have been twice crowned World Champion is inspiring. One young girl explained: ‘…it gives me lots of confidence knowing that I can be like him when I grow up if I try my best.’

Every athlete needs role models, but should Fury be one?

What a buzz for those kids. Every young athlete needs role models, but should Fury be one of them?  He might be strong with his fists, and, granted, he has battled problems with alcohol, drugs and depression, but he has voiced some ugly homophobic and sexist opinions and was banned from boxing for 31 months for steroid abuse.

Furthermore, given what we know about the damage caused to boxers, given the deaths, the head injuries and the long-standing calls from the British Medical Association and brain-injury charity Headway to ban the sport, should we be allowing it to continue at all?

The FA have just banned kids under the age of 12 from heading the ball due to strong links with brain diseases. Isn’t the impact to the head from a football equivalent to a blow to the head from a fist? Don’t the deaths and injuries we’ve already seen give us enough evidence to prove it’s a dangerous sport? And aren’t there dozens of better ways to get our kids fit and to fire ambition than to teach them to fist-fight?

The whole point of boxing is to hit

Lots of sports are dangerous. Jockeys fall off during horse-racing, cars crash during Formula One, rugby players get injured, and a 100mph crash on skis is never going to be pretty. But there is a fundamental difference between becoming injured during any other sport and becoming injured during boxing. Injuries during most sports are as a result of something having gone wrong. But the whole point of boxing is to hit your opponent so hard that he or she can’t hit you anymore. Bleeding from the ears? I’ve watched enough medical dramas to know that’s a bad sign…

In Fury’s own words, his game plan was to knock his opponent out: ‘I’m a destroyer… We trained for a knockout; we wasn’t tapping around in that gym.’ Surely, in the 21st century, when we are striving for kindness, peace and understanding among one another, we should be seriously considering whether these is any place for this barbaric sport at all.