This story gave me goosebumps – and it is nothing to do with Hallowe’en. I hope you don’t mind me sharing it with you.

It’s easy to subscribe to my weekly mutterings, there’s a widget on the home page of my website. It’s free, hassle-free, ad-free and spam-free too :) 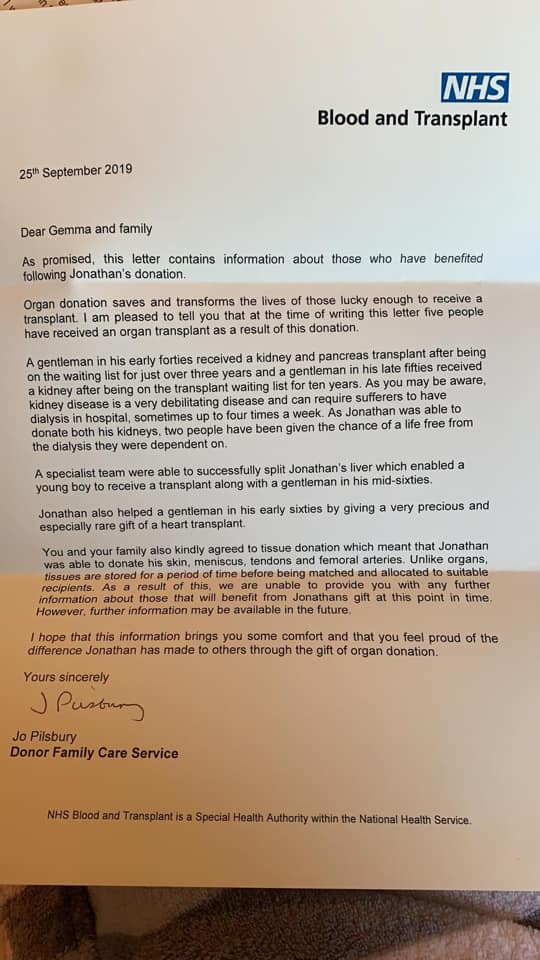 I was scrolling idly through Facebook this morning over breakfast and a post caught my eye. You might have seen it too as it has been shared over 60,000 times. It’s a photograph of a letter that a woman called Gemma received after the death of her husband, Jonathan. The letter was from the Donor Family Care Service of the NHS Blood and Transplant department, explaining that five people who received an organ transplant as a result of Jonathan’s donations.

We don’t know how or why Jonathan died, but we do know that his widow and three young children miss him terribly. Gemma posted the letter on social media to mark what would have been her husband’s 28th birthday, and to express how proud she feels of him. The letter makes for uplifting reading, even to a complete stranger.

It explains that a man in his early forties received one of Jonathan’s kidneys and his pancreas after being on the transplant list for over four years; the other kidney went to a man in his late fifties, after he had spent a decade on the waiting list. Each kidney patient would have had to travel to and from hospital up to four times every week for dialysis.

The letter goes on; Jonathan’s liver was carefully divided into two and shared between a young boy and a man in his mid-sixties. And a man in his early-sixties received ‘a very precious and especially rare gift of a heart transplant’.

So far, out of this sad death, the lives of five individuals – and their families – have been transformed. But there’s more. Jonathan’s family agreed to tissue donation too, so his skin, meniscus, tendons and femoral arteries were also removed before his funeral. Unlike organs, they can be stored until a match is found, so it may be that Gemma will receive another similar letter in future, explaining how more people’s lives have changed.

It’s tragic for Gemma and her kids that Jonathan died, but from the words of the post that accompanied the photo of the letter, it’s clear that knowing Jonathan has helped others has already given her comfort. I can’t imagine losing my husband. Although we live apart most of the time, we are still very much two halves of a whole. But if he were to die and his organs and tissues could give life or renewed health and freedom to someone else, then I would give that consent in a heartbeat. I expect he would do the same if the tables were turned.

Every day, on average three people across the UK die waiting for an organ 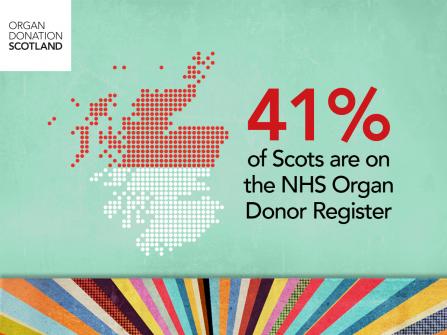 Since before we knew each other we’ve each carried Donor cards, and we’re both registered online; our daughters are too. As a family we seem to be as one on this; once we are gone, we’ll have no further need for our bodies, so if there’s someone else who could benefit from them, it would be selfish for us to deny them. Every day, on average three people across the UK die waiting for an organ. Every day, healthy organs and tissues are buried or cremated after funerals.

Not everyone would wish to be a donor, and I respect that. And not everyone who wants to be a donor can be, but old age alone is no barrier to donating. Every mainstream religion believes that organ donation – potentially saving a life – is a good thing to do.

Scotland will have ‘deemed authorisation’ 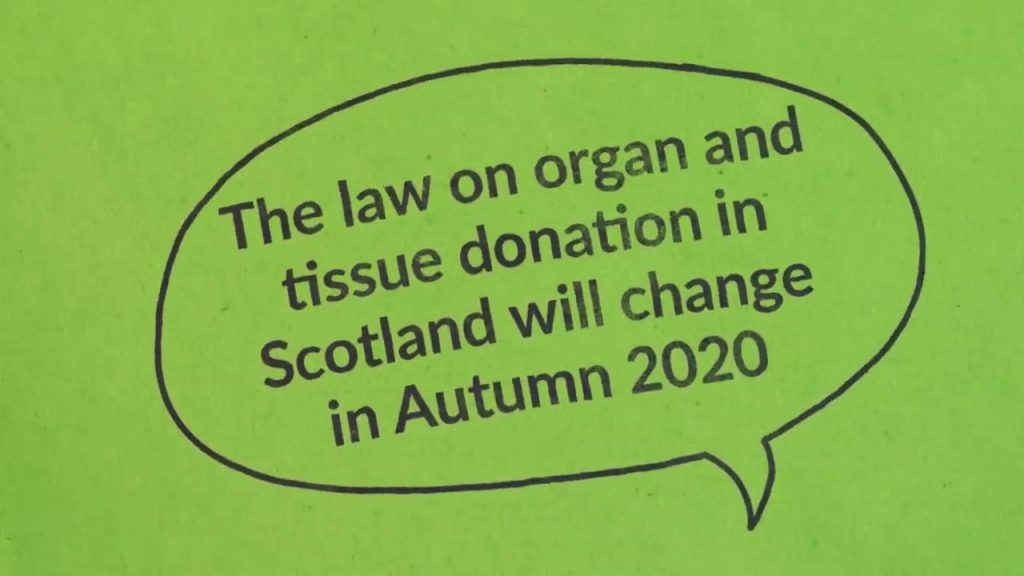 A bill was passed this summer declaring that from Autumn 2020 Scotland will have a ‘deemed authorisation situation’, meaning everyone will be presumed to be an organ and tissue donor unless they formally opt out. This seems to be a step in the right direction, but I’m not sure it goes far enough, as families will still be able to overrule that deemed consent. Currently, that happens too often; Organ Donor Scotland say that if 80% of the families asked about organ donation said ‘Yes’, 90 more lives could be saved in Scotland every year.

I don’t know what makes a family withhold consent, but to me it’s clear. I know I won’t be needing any of my ‘bits’ again, but crucially – would I accept an organ if it meant saving my own life or the life of a family member? That’s an unequivocal ‘yes’. If I’d accept an organ, I should be prepared to donate mine and those of my family too.

It just takes two minutes to join the online Organ Donor Register, and it’s essential to be registered until this new legislation comes in. Do it at www.organdonationscotland.org and discuss your wishes with your family. I hope that none of us will be asked to give consent for a very long time. But if we are ever in that situation, knowing our loved ones have saved lives after their death might bring comfort in a dark hour.