We had the car MOT’d a couple of weeks back. It’s a reliable wee runner but it still cost us a couple of hundred quid – we needed new tyres and wiper blades, but we happily coughed up. I know nothing (and care less) about how cars work, and have been known to turn up the radio to mask an unusual noise until I can get it checked out. This annual check is a Good Thing.

An MOT might seem like an expensive inconvenience, but it forces us to attend to any issues that might, if neglected, become dangerous. Brakes, tyres, lights, steering and suspension are the heart, lungs, kidneys and liver of our vehicles; the vital organs which ensure they remain roadworthy and are less likely to conk out or cause a danger to ourselves or to others.

I am delighted to report that in spite of a fair degree of neglect to my body in the past few months, I have recently passed a comprehensive human MOT, and beyond what I contribute in taxes, it didn’t cost me a penny. My heart, lungs, kidneys and liver all seem to be in perfect working order, confirmed by a battery of tests run last weekend not by our mechanic Les, but by the magnificent Dr Dan and the team of nurses – Jo, Aimee and Hils – who looked after me during a brief trip to Raigmore. The only body part still needing attention is my brakes; I have been known to find it difficult to slow down.

It’s a bit embarrassing to share this, but on a 3am trip to the loo on Saturday morning I passed out and fell down the stairs. Then to add to the drama, and because Mr Marr had missed it the first time, I passed out a few more times. I was bruised – both body and ego – but the continuing dizziness was more worrying. I clearly wasn’t dying (we looked online and did all tests for strokes – face, arm, speech), so in the most British of fashions I had a nice cup of tea and waited till the morning to phone NHS 24.

Admittedly my timing could have been better. For this, my first ‘about me’ visit to hospital since giving birth, I had chosen the weekend of the cyberattacks on the NHS, which meant that phone lines were busier than normal. As I waited in a queue to talk to an operator I worried about being a nuisance. Surely there were people far more unwell than I was? Surely this could wait till my GP opened Monday? But just as I was about to hang up my call was answered – and the kindness of the operator brought me to tears.

I honestly don’t know how they do it. With all the funding cuts the NHS has suffered, with all the criticism that is levelled against staff, every single person I spoke to or who treated me was – without exception – an absolute star.

The NHS 24 operator I spoke to reassured me I had done the right thing in calling – ‘fainting and falling down the stairs isn’t a trivial matter’, he said, and I wasn’t to worry about wasting anyone’s time. ‘Was there someone with me?’ he asked. ‘Was there someone who could take me to hospital, or did I need an ambulance?’

This didn’t feel like someone in a call centre simply going through the motions; his voice, and the voice of the nurse I spoke to next, was full of gentle concern. But if I thought they were lovely on the phone, I wasn’t prepared for meeting them in real life. It is my habit to downplay symptoms, but with kindness (and tea) they gently teased out what had happened, how I was now feeling, and what I was still worried about. 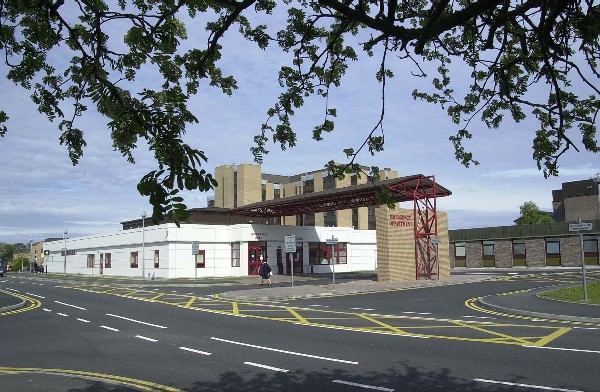 And then the MOT started. Physical tests first; blood pressure, temperature and – highly technical this one – seeing if I could stand up without swaying. I couldn’t. There were muscle tone tests and that thing where you have to follow the doctor’s finger with your eyes without going cross-eyed. Then urine samples, and blood samples, my heart and respiration monitored and an ECG. Then more tea and biscuits, more standing up to see if I was still swaying, then my results. Basically a clean bill of health (apart from ongoing dizziness) with instructions to rest, then rest some more, no driving for a few days, and straight back to hospital if things get worse or don’t improve.

So I have a good healthy body that has probably been overworked for a few months, and I need to remember where my brakes are.

I am reassured – enormously. And touched by the care and kindness of those who I met. The physical bruises from my fall may take time to heal, but it could have been worse. I could have broken bones when I fell. Or I could have been living somewhere without our marvellous NHS.