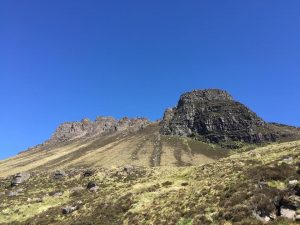 The weather forecast for last weekend was glorious, but someone forgot to tell Inverness. In place of the promised 20C and sunshine we had cold winds and haar. The plan had been to chuck the tent in the car and head off west late in the afternoon, but we were stalling. Our track record of hitting it lucky when camping in Scotland is not good.

It had been almost exactly a decade since Mr Marr and I had spent a night under canvas. The last time was a on three-week family holiday, carefully planned to introduce our girls to the glory of what is on our doorstep. We would walk and cycle, swim on the beach and cook sausages on an open fire. We would return home sun-kissed and healthy, with pockets full of shells and a passion for our home country.

Our first night was glorious. We pitched our upgraded family tent between the trees at Rothiemurchus and shared our breakfast (in my rose-tinted memory) with red squirrels. Shortly after setting off on our first cycle it started raining. And it didn’t stop raining for three weeks. It rained in the Cairngorms and in Perthshire, in Glencoe, on the Ardnamurchan Peninsula and on the sands near Arisaig. It stopped raining as we drew back into Inverness, where our neighbours told us they had watered our garden in our absence. Sun-kissed? Pockets full of shells? It took us weeks to dry out.

What possessed us to tempt the forecast again? Cameron McNeish. I’d have cursed him if the heavens had opened, but we were glad we’d packed the factor 30.

Cameron McNeish is best known for his love of the great outdoors. His books, TV shows and magazines have inspired thousands of us off our sofas and into the hills. He has bagged Scotland’s Munros three times, cycled the length of Britain, Ireland and France, and led treks in the Himalaya, Jordan and America. But it’s Scotland’s hills that first fired his passion, and that remain closest to his heart. 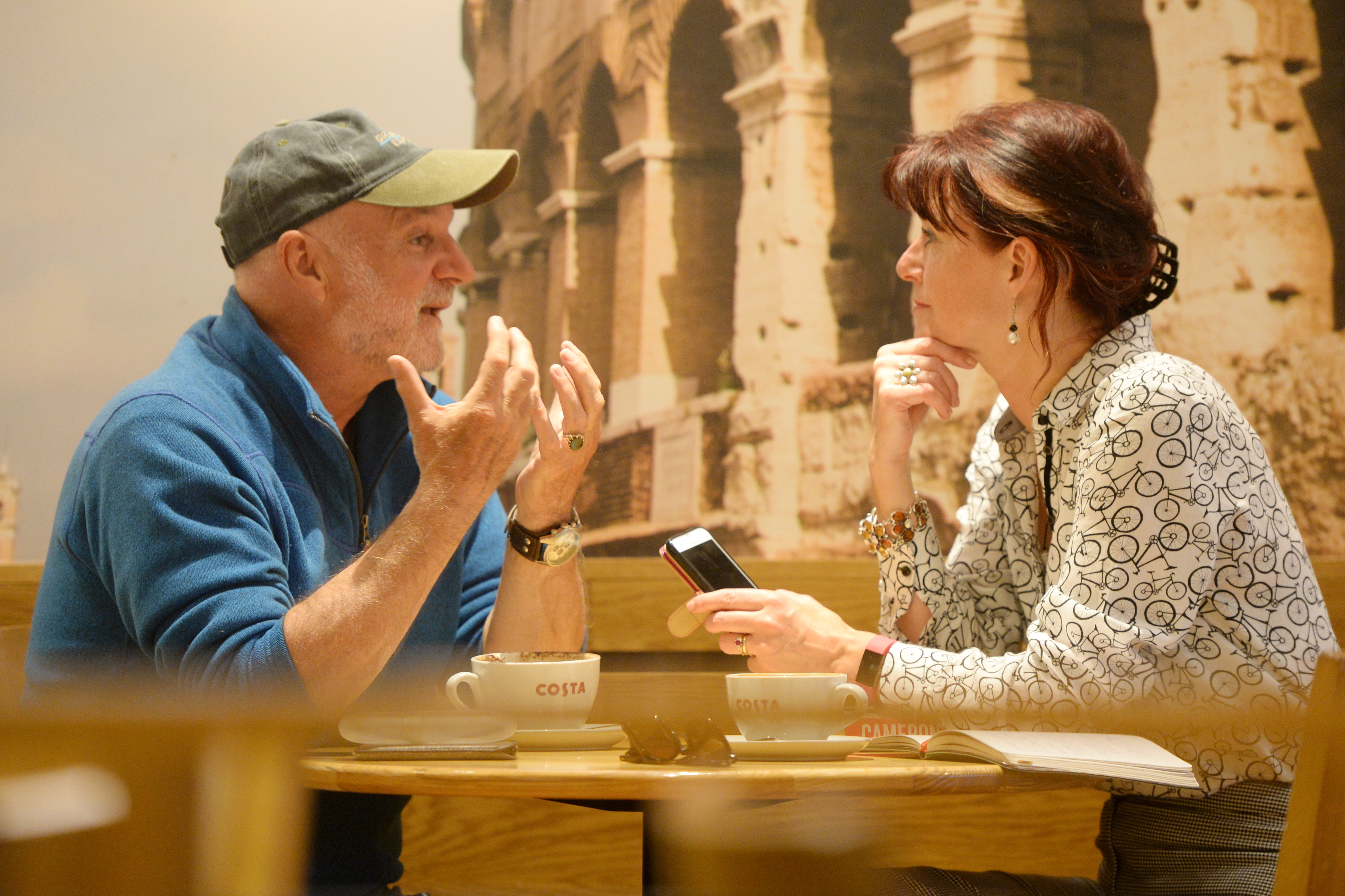 I caught up with him for a chat before the Inverness launch of his autobiography, ‘There’s Always the Hills’, which charts his story from the tenements of Govan, via management of Youth Hostels, to his full-time writing and TV career. His passion for the outdoors is infectious.

He’s as fit as a whippet and, in person, much slimmer than the puffa jacket he wears on TV would suggest. He’s charismatic too, and a great raconteur, sharing tales not just of his own exploits on the hills, but of the characters he has met, walked with and interviewed. These range from Outlander actor Sam Heughan to writer and campaigner Lesley Riddoch and former First Minister Alex Salmond. And McNeish is a well-known campaigner himself, keen to protect Scotland’s wild places. He believes that if we truly connect with the landscape, we’ll act to protect it for future generations. 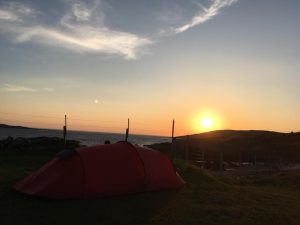 Inspired by McNeish, where did we head? The forecast suggested west looked best, so we set course for Ullapool, followed the single-track road between Ben Mor Coigach and Stac Pollaidh, and ended up at Port a Bhaigh campsite north of Achiltibuie. The wind kept the midgies away while we pitched our tiny tent, and we sipped chilled wine from kids’ plastic cups as we cooked our chicken dinner. We watched the sky turn golden, then zipped ourselves into our sleeping bags, and slept to the sound of a tiny waterfall in the burn a few feet away. Bliss. If a little cramped…

The morning was glorious, and Stac Pollaidh was calling – again. We’ve summited it dozens of times and it never disappoints. Rising straight from the car park it’s the hill with the greatest ‘effort to reward’ ratio in Scotland. With the mountains of Coigach and Assynt in view, and the Summer Isles rising out of the sea to the west, it was breath-taking. 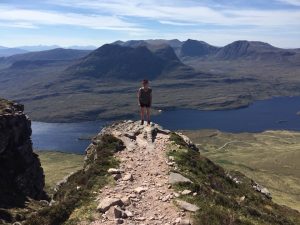 At the summit of Stac Pollaidh

We didn’t enjoy the solitude McNeish loves in his hills – this was a scorching hot Sunday on a bank holiday weekend and the car park was packed. But we did manage to steal a quiet few minutes by a lochan on the western return path. The rest of the weekend was spent sitting on the beaches, watching an otter and chatting to our fellow campers. We were away from Inverness – and without a mobile phone signal – for less than 48 hours. It felt like a week.

Someone once said that a change is as good as a rest. We rested, recharged, and will be back in those hills – under canvas – before you know it. Until the next time it rains… 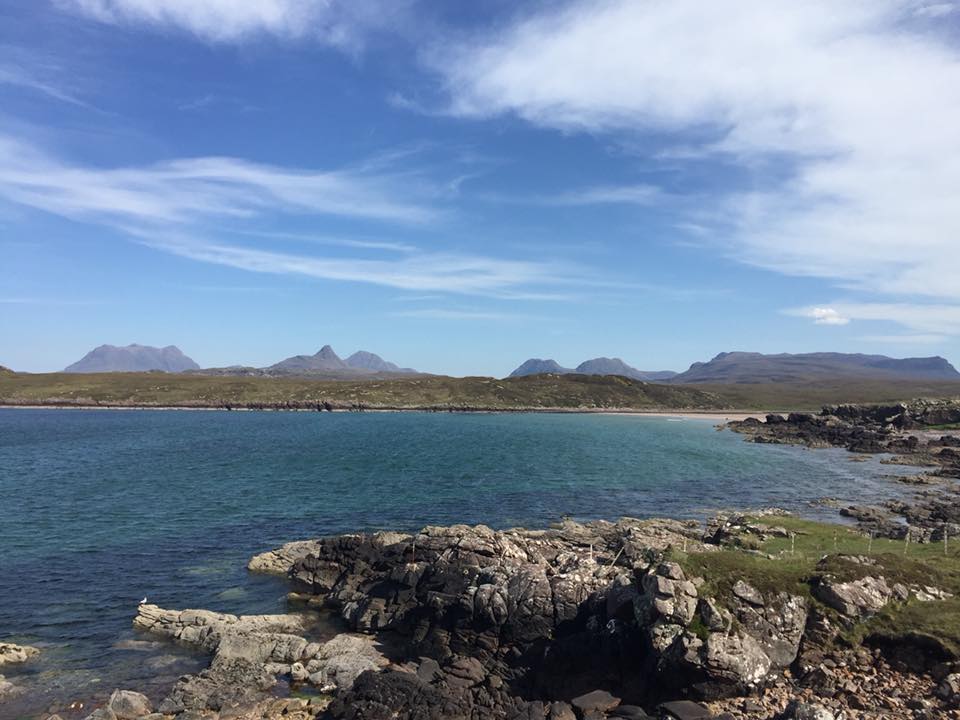 The Assynt and Coigach mountains from Achnahaird Bay

This post first appeared in Seven Days, published by SPP and issued with The Inverness Courier, The Northern Scot and four other titles across the north of Scotland, week ended 1st June 2018.