Listening to Rona and Colin chatting is like listening to any old friends catching up. They are sitting in Rona’s kitchen on Thursday afternoon talking about mutual pals; they both went to Crown Primary School in Inverness. They talk about growing up on the same Inverness street, and living and working just yards apart from each other in London, when Rona was in the Metropolitan Police and Colin was an IT consultant. And they are comparing notes about their medical complaints, as old friends tend to do; both have been diagnosed with MS.

Colin and Rona are both back living in Inverness, and even for a seasoned talker like me it’s hard to get a word in. But contrary to all appearances they are not old friends catching up; I am witnessing their first meeting. And they are unlikely to remain friends for very long; ‘a month and a quarter at most’, says Colin, breaking into an easy laugh. Because Colin doesn’t intend to be around much longer; he has booked his flight to Basle in Switzerland, and will die in ‘Lifecircle’ by self-administered lethal infusion on the 15th of June. This is his choice. He has decided to end his life before he has to endure another Highland winter.

You’ve probably heard of Colin Campbell or listened to his story on TV and radio – somehow (and he is not sure exactly how it happened) a journalist got wind of his story and he has been everywhere – a film crew is following his story and his diary is being published in weekly instalments in a national newspaper. Rona is my friend. She contacted Colin on becoming aware of his plans. They invited me to join their conversation.

It is daunting, and I feel a little in the way, but at the same time a little like an umpire. While their lives have similarities, the situations Colin and Rona find themselves in couldn’t be more different. Although diagnosed much later than Colin, Rona’s MS has progressed more rapidly, leaving her unable to walk unaided, and requiring considerable levels of care; this comes from professional carers, from her family, and from an army of friends who pop in to help with shopping, or to make sure she can get to the toilet. Rona’s life is full – she finds joy in small things; scones and clotted cream, sparkly jewellery, getting her hair done. 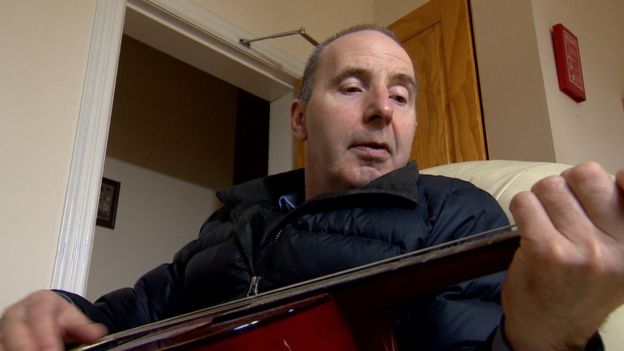 Colin lives alone in a city centre flat with his guitar for company. He struggles to manage the two flights of stairs to his flat and survives on microwave meals. He hasn’t worked for a while and has sought no additional support. He doesn’t want to resort to a mobility scooter – he finds them ‘undignified’. The cold of last winter made him miserable and he is reluctant to face another; hence his ticket to Basle next month.

While Rona and Colin both firmly agree on the right to assisted suicide and believe it should be available in Scotland, Rona is concerned – no, upset – that Colin, who is considerably less disabled than she is, has decided to end his life so soon. It becomes her mission over the course of the afternoon to persuade Colin to grant himself a ‘stay of execution’ and to postpone his visit to the clinic at least until he can explore the possibility of getting help.

And although he claims still to be looking forward to his life being ‘completed’, I wonder if Colin’s resolve is softening. I leave them to talk in private; I later hear that they talked for ten hours.

It’s Monday afternoon, and we are back in Rona’s kitchen; the conversation has moved on. A social worker has contacted Colin ‘out of the blue’ and will visit him on Wednesday. At the risk of upsetting him I ask the question that has been troubling me since we last met; why incur the hassle and expense of travelling to Switzerland to end his life when he is physically able to do so at home?

And then something happens. In the course of a conversation about Colin’s motivation for going public, he recognises that the publicity he has received for introducing legal assisted suicide in Scotland has been extraordinary. I don’t mean to ask the question, but it is out before I have thought:

‘Wouldn’t you do your cause more good alive than dead?’

‘If you think I could do more good alive, then maybe you’re right.’

Colin Campbell believes in assisted suicide being legal in Scotland. He believes there should be better medical care and pastoral support for patients, assistance in getting the care and benefits to which they are entitled, and psychological support to help them accept the changes that are happening to their bodies, and to their lives.

If he can get some practical support to help him live his life more comfortably, and can continue to agitate for a change in legislation; or maybe even something like a Maggie’s Centre for sufferers, then perhaps his life might be worth more than the message of his death.

Rona may – may – just have changed the course of Colin’s summer.