What is it that my Mum used to say when I was reluctant to try something new? ‘Don’t knock it till you’ve tried it’. When you think about it, that’s annoyingly good advice for most of life’s situations – without taking that advice I would never have picked up a ukulele (I now enjoy an occasional 20 minute solo secret singalong), would never have discovered the difference a squeeze of lemon juice could make to plain steamed broccoli, and I would never have found myself wild swimming last Tuesday lunchtime in a secret loch above Loch Ness. 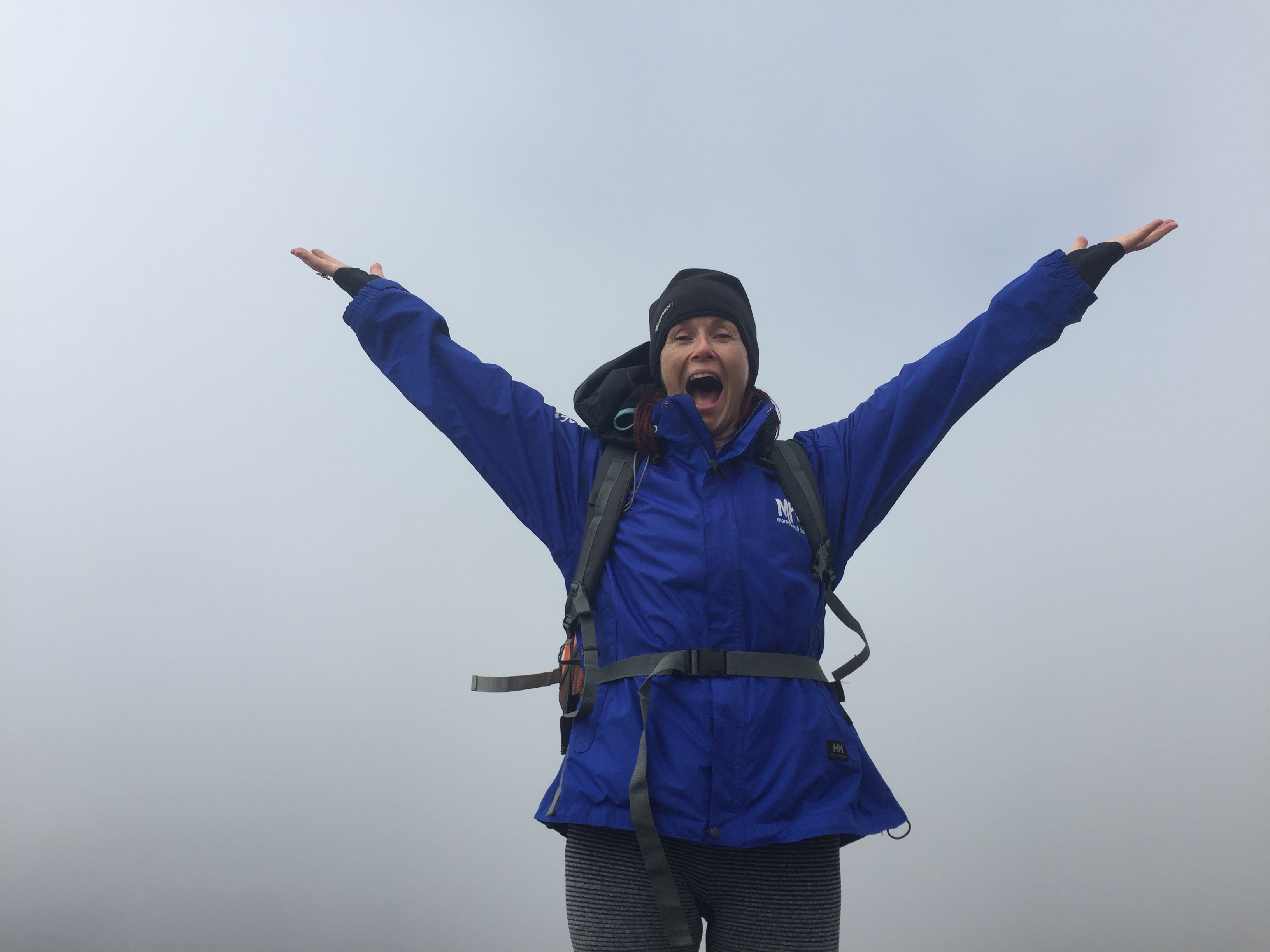 At the top of Ben Wyvis. Lovely weather, huh?

I blame my sister. Not for the ukulele or the broccoli and lemon, but for the swimming. For years she has been fitter than me, stronger than me and – in every way – more of the outdoorsy type than me. It’s not that I don’t like being outside, I really do. I managed two walks and a bike ride last weekend, and the Saturday before that I made it to the top of Ben Wyvis. But my sister, my running-and-walking-and-cycling-and-swimming sister, takes it to a whole new level.

We were supposed to be going out for lunch. I had soup and a cheese scone in mind, but she had other ideas. She messaged the night before: ‘We’re going swimming instead’ her text said. ‘Have a sandwich, wear your swimmy and bring a towel and clean pants. I’ll bring the wetsuits.’

This was not part of the plan. What about my soup? What about my scone? But wild swimming is something my sister has been doing for a couple of years now, and she seems to think it does her some good. So rather than go with my instincts and cancel, and rather than pull ‘big-sister’ rank and refuse, I channelled ‘Don’t knock it till you’ve tried it’, and found myself rummaging for a rarely-used swimming costume.

Daughter number 2 was home for a flying 48 hour visit. We’d not long picked her up from the airport after her summer working as a kids’ rep in Greece, where the water temperature was in the mid-to high 20s. She was ostensibly packing to head back to Glasgow for university, but she was keen to show off her tan. So another wet suit was found (how many do one family need? One each, apparently) and we set off to swim.

There is no denying I was nervous. Although I swam for my school as a kid and swam a mile a day when I was a student, it’s not something I have kept up. Somewhere on my approach to middle-age I lost the ability to dunk my head under water, so I now swim like an old lady who’s afraid of getting her hair wet. Frankly it’s not a good look. It also gives me a sore neck.

But even before we got into the water there were the clothes to negotiate. A thick, winter-weight wetsuit, plus little bootees (with a separate toe, so I could still get my flip-flops on top) and warm, waterproof gloves. Then the star item, the head-gear; an insulated cap with a fetching chin strap. I was so busy laughing at how ridiculous my sister and daughter looked, that I forgot I looked exactly the same myself. 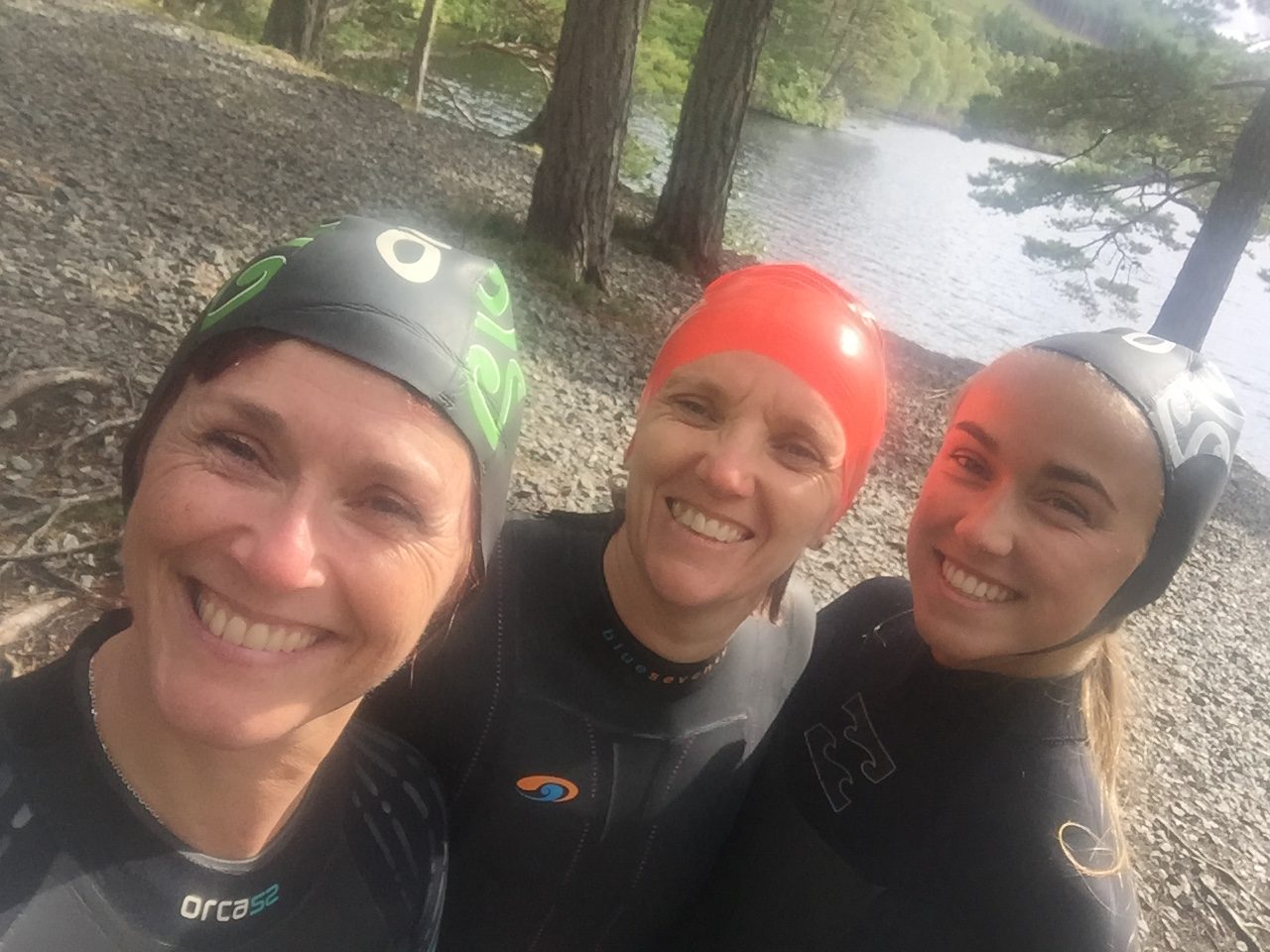 Yup. We do look ridiculous. But we’re in it together…

I dipped a toe in. It wasn’t cold. I launched gracelessly from the bank. I expected that the cold would take my breath away, but the wet suits were working hard. It felt cold, but tremendous. Clean and refreshing.  I felt alive. I felt free. There were pine trees with their feet in the water, and a fisherman in a boat across the water. Having never swum in lochs before, this was a perspective I’d never enjoyed. It’s a whole new way to see Scotland.

In no meaningful way can what we did in the water for half an hour be classed as exercise – it was more about bobbing, and laughing, and chatting, with a bit of floating, and laughing again. I’m sure our fisherman friend caught nothing, but we weren’t there for long. By far the most strenuous part of the whole adventure was getting out of the wet wetsuit at the end – hopping around on the gravel wrapped in a towel, trying to get dried and dressed before we headed home. There was a flask of hot tea and – even better than a cheese scone – my sister had baked cake. 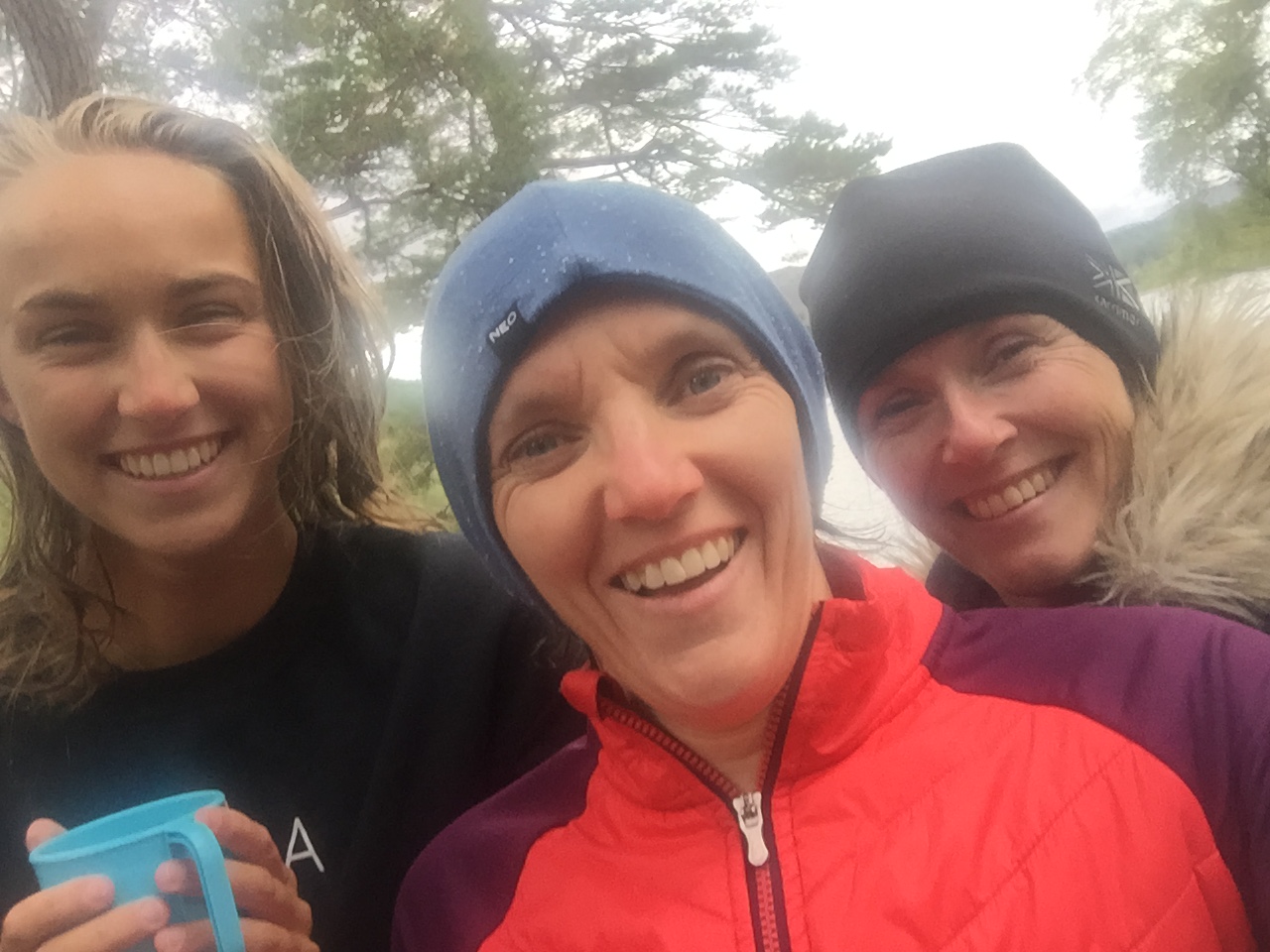 Wild swimming isn’t new. I was in Broughty Ferry at the weekend and noticed that ‘Ye Amphibious Ancients’ Bathing Association’ have been swimming from the pier there daily since 1884, and there are groups who swim in Loch Ness from Dores every Saturday morning. But it’s becoming a ‘thing’ – I’ve read articles and heard radio broadcasts celebrating the health benefits, both physical and mental, for some months now.

But it was new to me, and I wonder – even after one dook, if I’m just a little bit hooked. My body tingled for hours – it was such a good feeling.

‘Don’t knock it till you’ve tried it’. I did knock it, but then I tried it. And an industrial strength wet suit is now firmly at the top of my Christmas list. 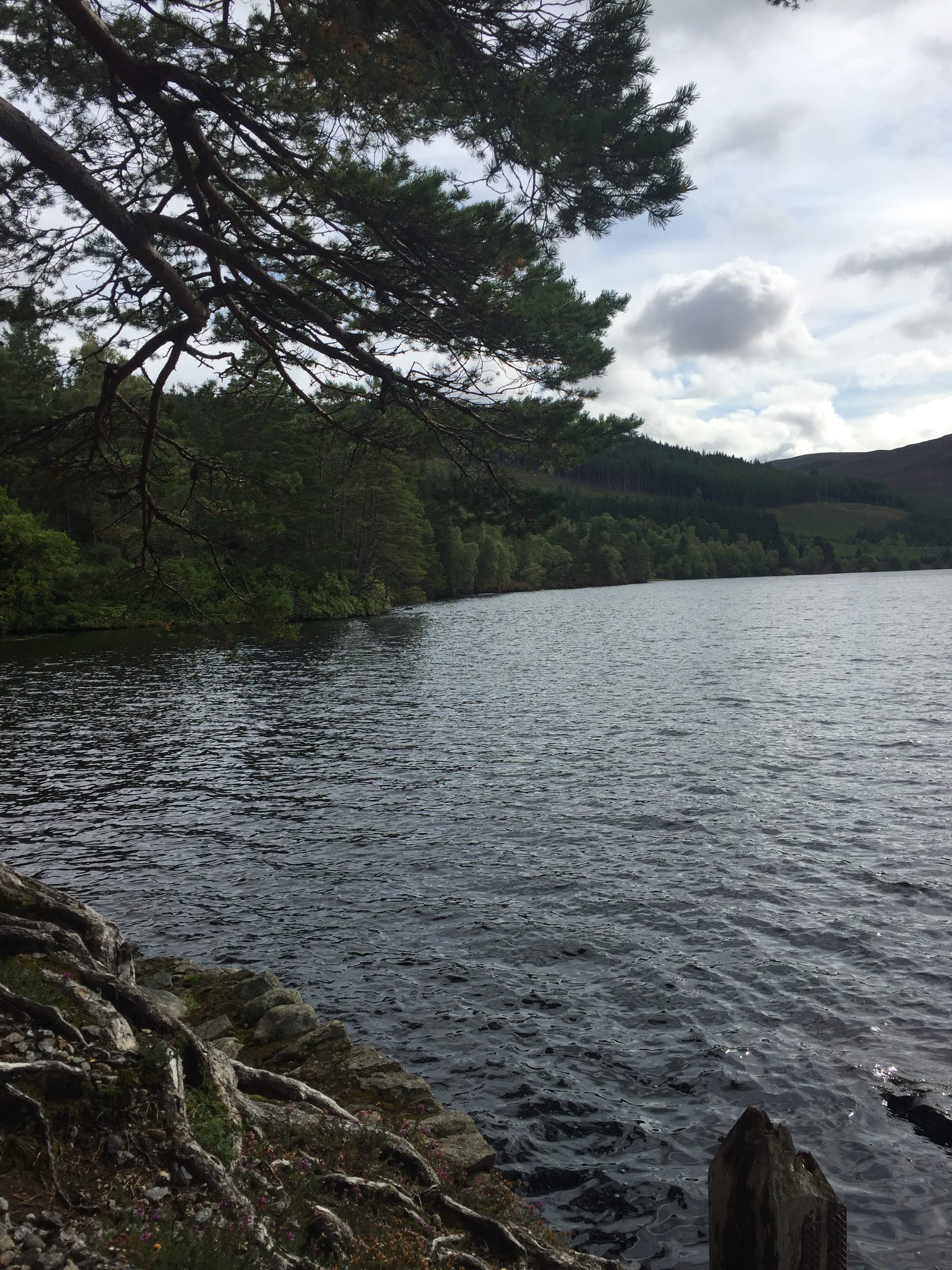 Our secret swimming loch. I’d tell you where it is but my sister would kill me…