There’s a small but growing stack of leaflets under my fruit bowl, and I’m keeping them till early May. They’ve all been delivered through the letterbox, some by Gary the postie, others by volunteers, and I’ll read them from cover to cover, every one of them. The pedant in me will take delight in finding spelling mistakes – as a trainee solicitor in Glasgow in the 1990s we had to spend an hour every day proof reading legal documents, and the habit has stuck. But really, I’ll be scanning them in the hope of finding evidence. I’ll be searching for policies. Positive reasons why I might vote for one political candidate or party over the others at the upcoming Scottish elections.

So far, Edward Mountain is ahead… (leaflet count only) 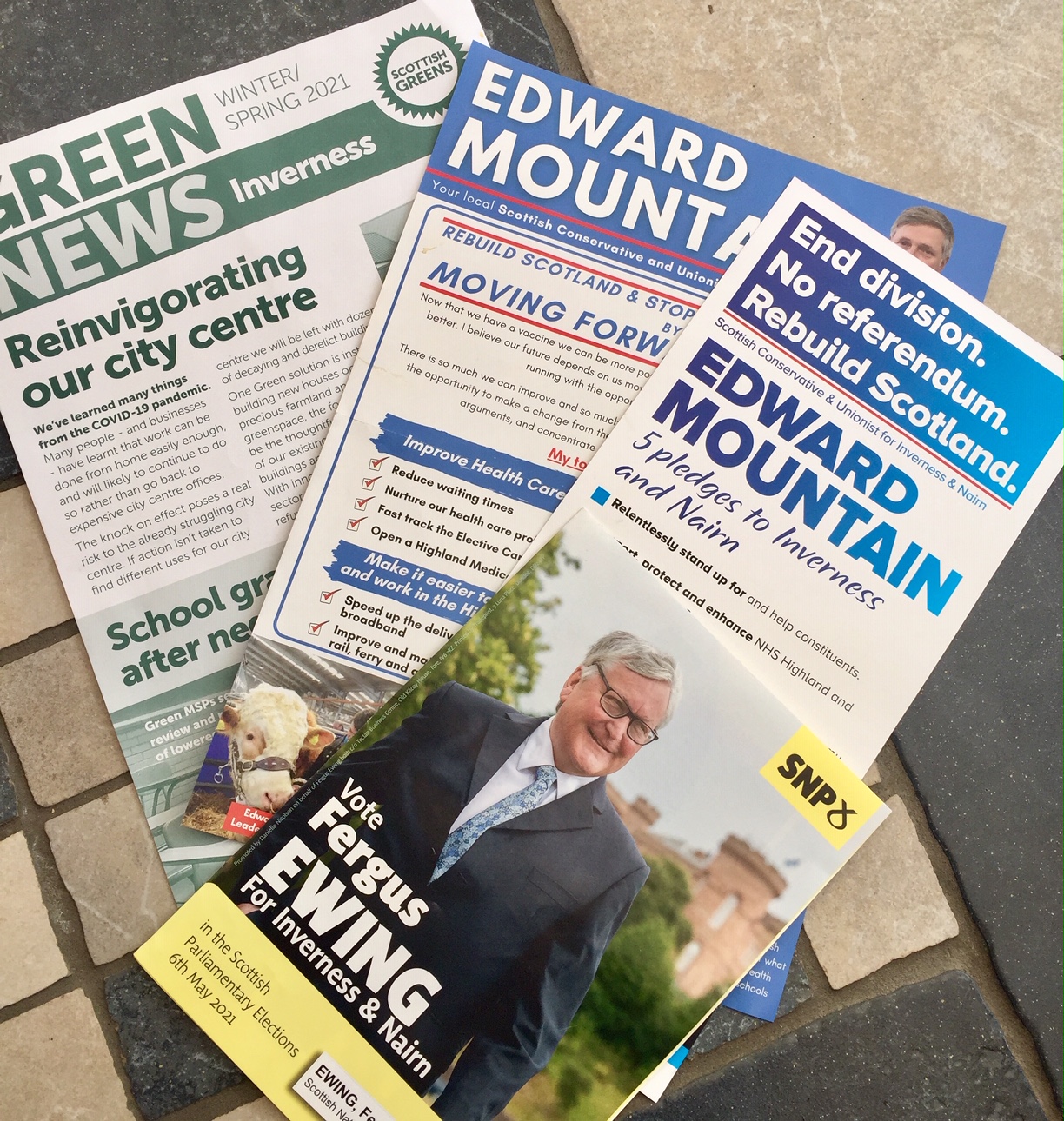 Are any of them worth the paper they’re printed on?

So far, purely in terms of numbers of leaflets through the door, Scottish Conservative and Unionist candidate Edward Mountain is ahead, closely followed by the Greens (printed on recycled paper, of course) and the SNP. The SNP leaflet from Fergus Ewing cunningly unfolds to make a poster, should I wish to declare those political leanings to my neighbours and passing dog walkers.

I know that it’s early days, but so far there’s nothing from any of the others. At the time of writing (Monday morning), Alec Salmond’s Alba party is still trying to recruit candidates, so he won’t be bothering my letterbox yet with detail of policies beyond ‘super majority’, whatever that might look like.

I’ve not made my mind up yet…

Let me just state for the record that I have not yet made up my mind which way I’ll vote. I’m still at the ‘gathering evidence’ stage of my investigations, and these leaflets are part of that. I’ll take them into consideration, alongside listening to TV and radio debates. I’ll add that to what I know of the candidates from personal experience, from their track records, and from reading their words in their newspaper columns. And only then, once I’ve made an informed choice, will I decide how to cast my vote on 6th May.

The right choice might be for me to vote for a party I’ve never supported before; it might be to stick with previous loyalties. Crucially, I’m approaching this with an open mind. That’s an essential requirement, I believe, for every one of us who is entitled and intending to vote.

Voting is a responsibility

Voting isn’t just a right, it’s a responsibility too, and I take mine seriously. This isn’t a new thing I’ve developed through lockdown boredom; it’s something I do every time an election comes around. I believe I owe it to myself, my community, my country and future generations to make the right choice. Of course, half the time there’s little point – it will be a done deal who is going to win, especially in safe seats. And that’s why we need more electoral reform… but I digress.

The main problem is that I don’t know who or what to believe. I am slightly more inclined to believe what’s been printed than to engage with online political marketing, and relative election spending on leaflets versus online marketing suggests I’m not alone in that. There’s something more accountable and trustworthy about print media, its lies can’t be deleted or later denied… although who can forget Ed Milliband’s Labour Party promises that were carved into stone in 2015?

So, based on the incomplete set of leaflets I’ve received so far, what are the candidates promising? To be honest, there’s nothing to choose among them. Both Tories and SNP focus on improving health, education, transport links and affordable homes. The Greens talk about regenerating Inverness city centre, calling tax-dodgers to account and supporting the arts. No reasonable voter could argue with any of that, so I’m no further forward.

But what’s omitted from the leaflets speaks volumes. 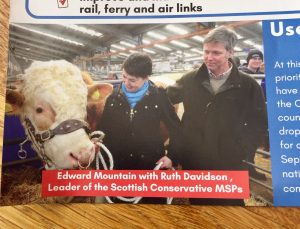 But it’s not just what’s on the leaflets that’s important, it’s what’s omitted from them too. Neither Conservatives nor SNP bear the name or the image of their party leaders, although soon-to-be Baroness Davidson is pictured with Edward Mountain, the pair standing beaming beside a bull. And other than in one survey question on the rear of the SNP leaflet, neither Independence nor IndyRef2 get a mention.

And that’s the problem. Is anyone telling the whole story? How do I find out about each party’s election promises – and, crucially, how they’ll be paid for – so I can compare like with like?

In the words of The Carpenters, that campaigning for May’s election has ‘only just begun’. I’ll keep hunting for evidence so I can make an informed choice on May 6th.