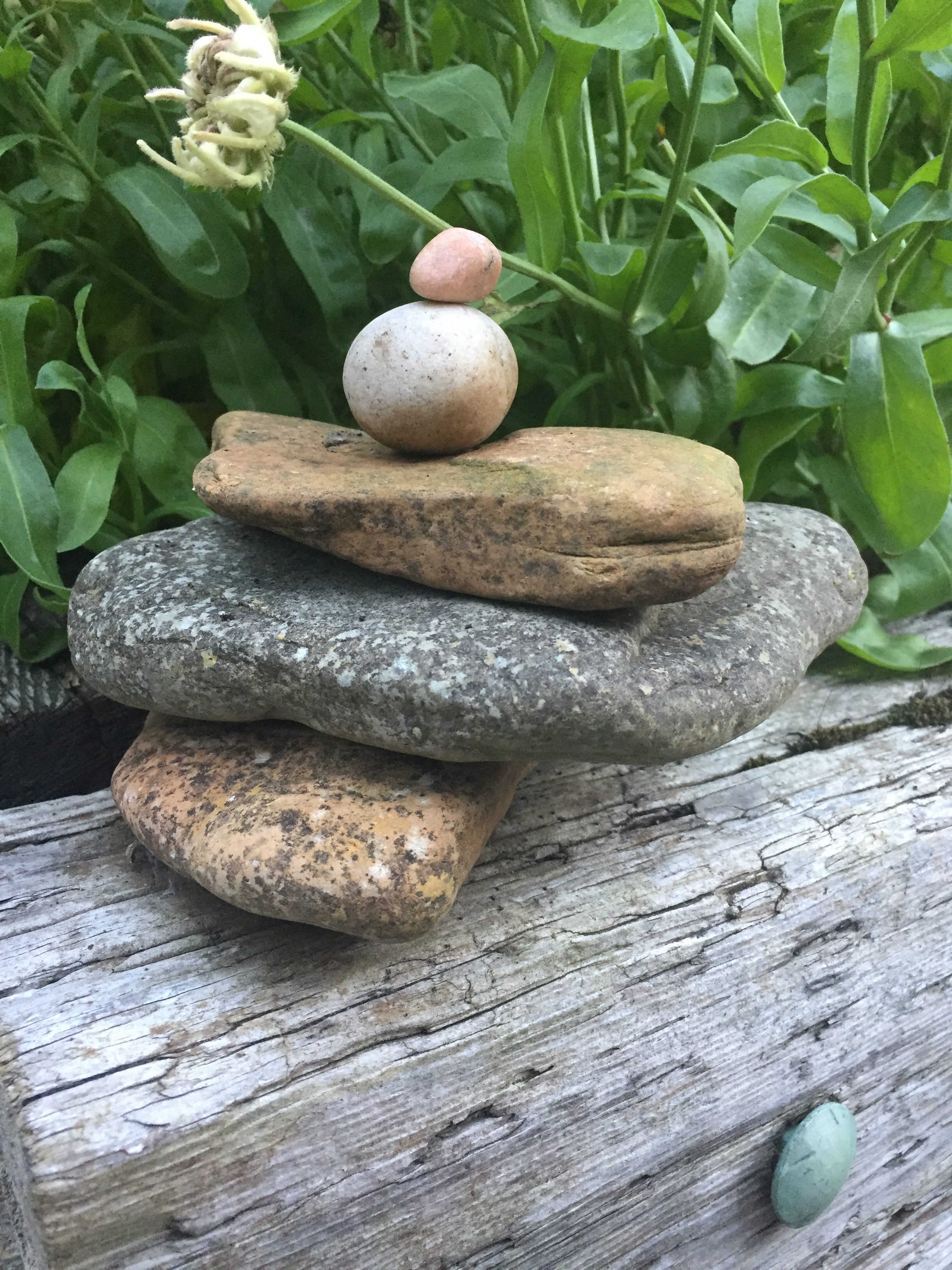 Confession time… on the corner of my raised veg patch in my back garden I have a small stack of stones. The stones are  of all different sizes and colours, and I have gathered them, over time, from walks along beaches. I’d love to be able to say where each came from, but I’m 51, and that information is no longer in my memory banks. Periodically the stones get blown over, or knocked down when I’m gardening, and I have to stack them up again. There’s something almost meditative, and infinitely pleasing, about getting them to balance. 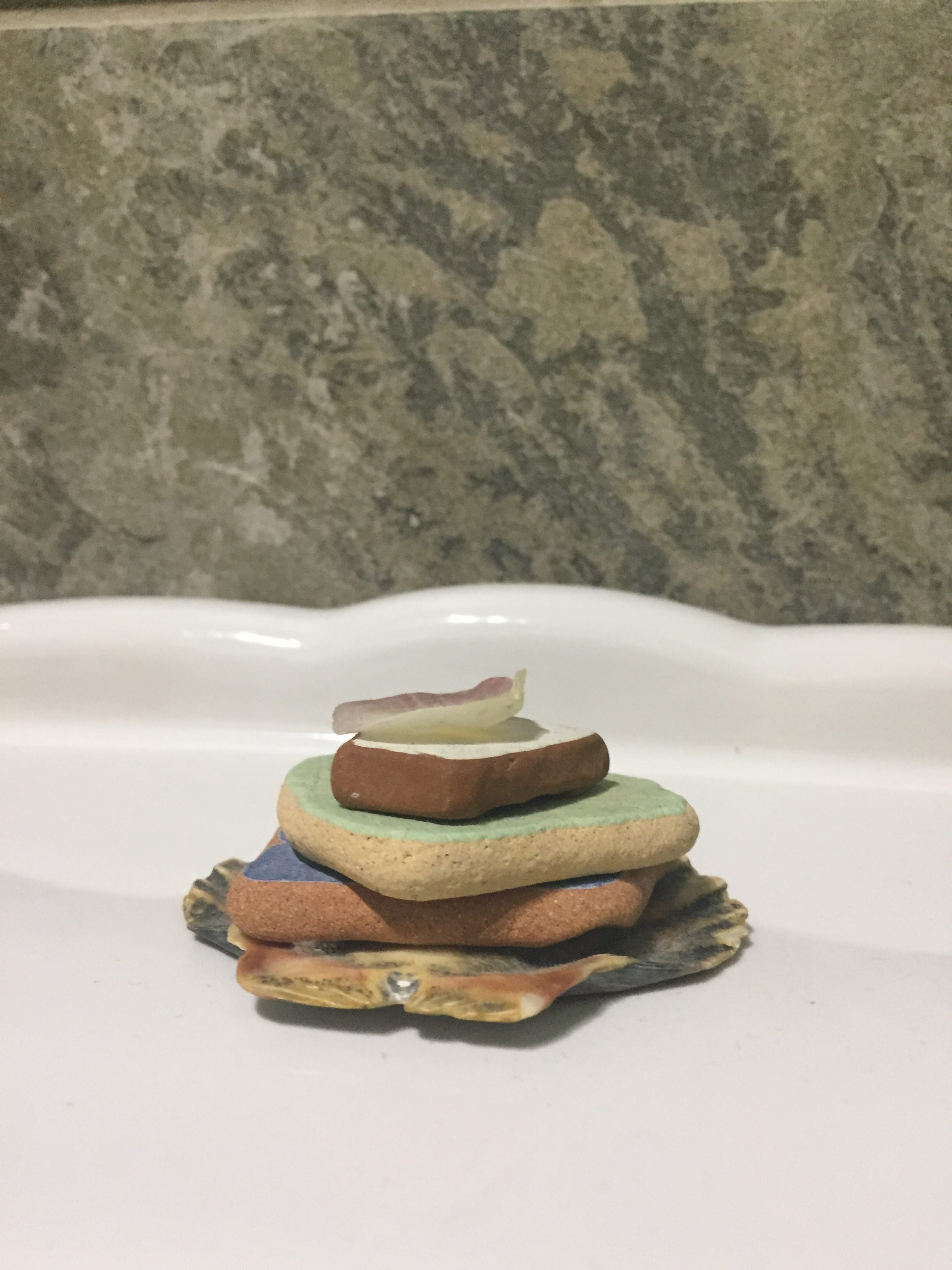 I have a similar pile of ‘stuff’ in my downstairs bathroom, again collected from beaches. The base is the flat of a scallop shell, with bits of coloured pottery and glass piled on top. I love collecting sea-worn fragments of old plates, cups and glasses from beaches. I like to think up a history for each piece – this piece of china came from a ship that was wrecked in the 1800s, or that cloudy fragment of sea-glass (blue is my favourite, and it’s really hard to find) was from a passing Spanish Galleon. In truth they were all probably washed off the side of a tanker taking compressed rubbish to Eastern Europe. Sometimes it’s better to dream…

And I love to come across stone sculptures on the beach – evidence, in the most transient of ways, that others have recently walked this way. To me they are the equivalent of finding a sandcastle, or the marks where kids have made sand angels. They are like the names of strangers written in the sand and encased in a heart. They only last for as long as it takes the next tide to erase them, leaving a blank canvas for tomorrow’s wave of amateur artists and sculptors.

They remind me of a holiday in Skye when our girls were about five and seven. After walking through miserable drizzle to a tiny beach at Talisker we decided to get creative. On an otherwise stony beach there was a clear patch of sand. We got busy collecting seaweed and old lengths of washed-up blue rope. We chose the whitest, roundest of pebbles, and we shaped our found treasured into ‘life-sized’ mer-people, with stony tails, long bladder-wrack hair, and shells covering their topless modesty. We posed for photographs, and then left. Did anyone else see our art work? I very much doubt it. When we returned to the beach a few days later the sea had reclaimed our materials and there was no trace we had ever even been there.

That’s the first rule of stepping out into nature, isn’t it? ‘Take nothing but photographs, leave nothing but footprints.’ But in the past week the practice of stone-stacking has been roundly criticised by an organisation called The Blue Planet Society, who says that beaches are being ruined and their natural ecosystem is being put under threat by the ‘craze’ people seem to have to build their own stone stacks for Instagram. The society’s twitter feed claims the ‘problem’ extends from Orkney to Cornwall, and they are calling for a halt to the practice. Even in the week of Boris’s burka brouhaha, the story was picked up and run by the BBC.

I am no ecologist, but I believe there are far greater threats to our oceans and shore-lines than people who spend half an hour on a beach balancing a few stones on top of each other before taking a photo for Instagram. Even where clusters of stone piles are being built, the next big storm will knock them flat, recreating a wonderful blank canvas. What would people rather find at the beach – litter? Plastic bottles? Groups of kids staring at their phones? Or families playing together, learning together and creating together – and making memories, like our memories of our Skye mer-people?

Stone stacking, done well, is an art. Dunbar in East Lothian welcomed the European Championships this April, and the photographs of the gravity-defying sculptures are mesmerising. Whether there’s a level of competition or not, stacking a few stones on beaches is harmless fun. 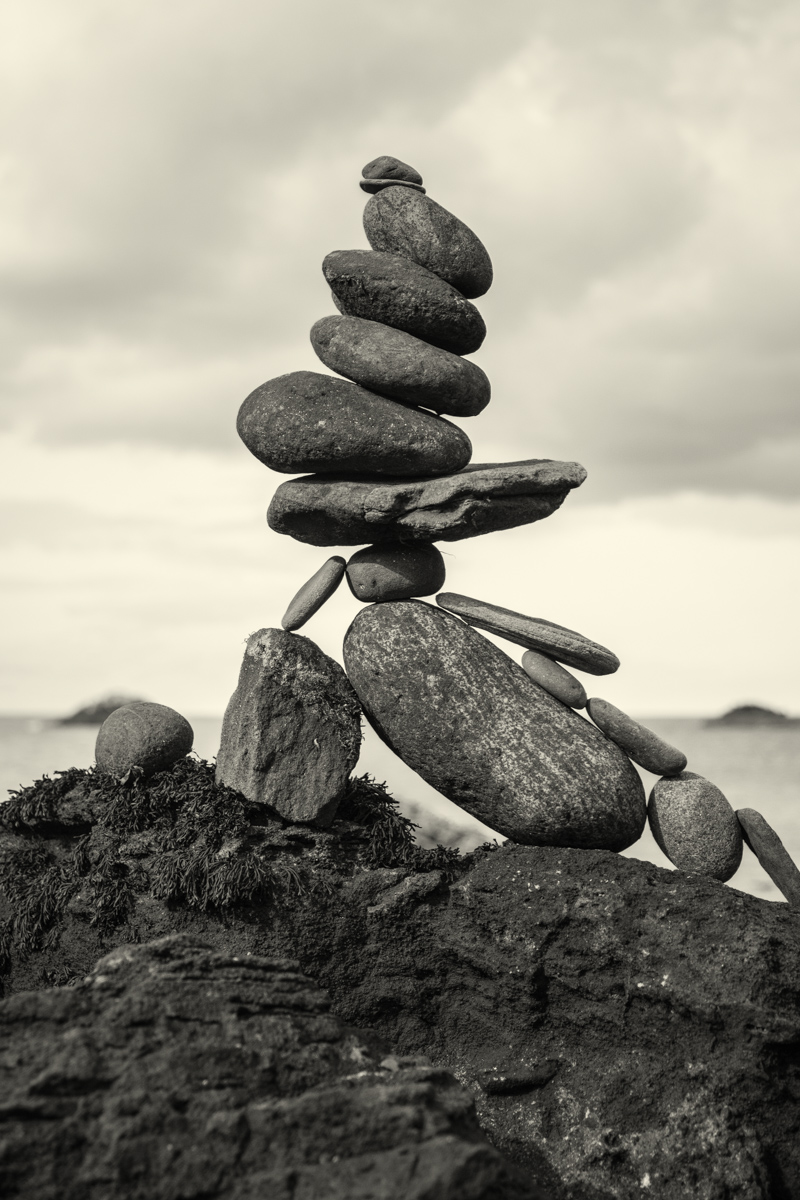 One of the entries to the European Stone Stacking Championships 2018

It might be a different matter in our mountains, where a stone stack could be mistaken for a way-marking cairn, and that’s a practice that should be discouraged. But to those calling for stone-stacking on beaches to be banned, I suggest they head to their nearest beach and try it for themselves. And if it really still offends, then knock the stacks over. The next tide or storm would have done that anyway.

This post first appeared in Seven Days, published by SPP and issued with The Inverness Courier, The Northern Scot and four other titles across the north of Scotland, week ended 17th August 2018.