I ticked off an item from my ‘Highland To Do’ list last week. It took me less than an hour, including hanging around to soak up the atmosphere; any longer and the damp would have started to seep through my boots. But even in the cold and the drizzle of last Thursday afternoon it didn’t disappoint. 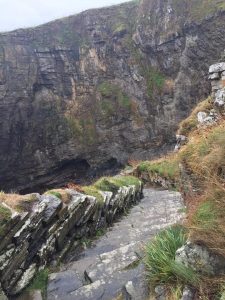 Since watching Edwyn Collins’ post-stroke biopic ‘The Possibilities are Endless’ in 2014 I’ve been meaning to make a pilgrimage to The Whaligoe Steps. Until last Thursday, the time was never right. On my way back from hosting a workshop with senior pupils in Wick High School, I pulled over, pulled up my hood, and descended into history.

You might not think a set of stairs cut into the side of a cliff a few miles south of Wick would be much to write home about, but these steps are evidence of an extraordinarily tough way of life. It might have been the mist, or the isolation from everything except the sound of the waves and the cry of the gulls, but the air felt loaded.

Around 330 flagstone steps (I lost count exactly) zig-zag steeply into the narrow ‘goe’ or natural harbour, and I’ll warn you that they are slippery when wet. At the height of the herring industry 20 boats or more would land their catches at that harbour; catches that would need to be gutted and either cured and packed in barrels to be shipped to the continent or taken to market to be sold as fresh. 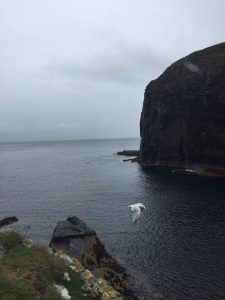 If you know the geography of this north east corner of Caithness you’ll be aware of the height of the cliffs, so any inlet, even one as seemingly inaccessible as Whaligoe, was a major asset for the local fishing industry. The details of who built the steps, and when, are lost in time, but there is written record of them as far back as 1769.

The herring industry of the 19th century was of vital importance to the Highlanders who had been dispossessed of their homes during the clearances and who were forced, either to take the King’s Shilling and join the Navy, or to take to the seas to try and scratch a living. Fishing is, and always has been, a hard life, and nowhere is this more apparent than at the Whaligoe steps. If you’ve read Neil Gunn’s ‘The Silver Darlings’ or visited Wick’s Heritage Museum, you’ll have an inkling of what the life was like. 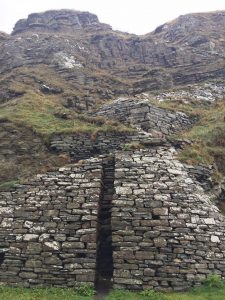 The steps lead down to a grassy bank, itself some 10 -15 feet above sea level, depending on the tide. Boats could moor against it to unload their catch which would be processed on site by the wives and daughters of the fishermen. There is still evidence of the salt store and a fireplace, together with a winch for hauling boats ashore in poor weather, and iron rings for schooners to tie up.

It might be my imagination but there was still a tang of fish in the air down there. It is the steps themselves that impress. They were steep enough to knock the breath out of me when I was climbing back up carrying nothing but my phone and car keys, and I couldn’t help thinking of the feet that had trod them before me; women, often into their 70s, often unshod, carrying barrels down from the cooperage at the top, returning with huge baskets of gutted fish on their backs. And the top of the staircase wasn’t their final destination; while their menfolk set back out to sea the women would carry their baskets of fish to market in Wick, some eight miles away.

The last boat to use Whaligoe for fishing tied up in the 1960s and since then locals have tirelessly maintained the steps and the banks, cutting the grass and tending to repairs, protecting this evidence of an unspeakably tough way of life. Now the only boats to enter Whaligoe’s safe haven are on pleasure trips, viewing the steps from the same aspect as the centuries of fishermen who braved the seas to make a living.

I sat in the café at the top of the steps, warmed by coffee and deep in thought. My mum has traced our family tree right back to the 1700s, and barring the odd shoemaker here and there, we were fisherfolk. All of us. In another life that could have – would have – been me. 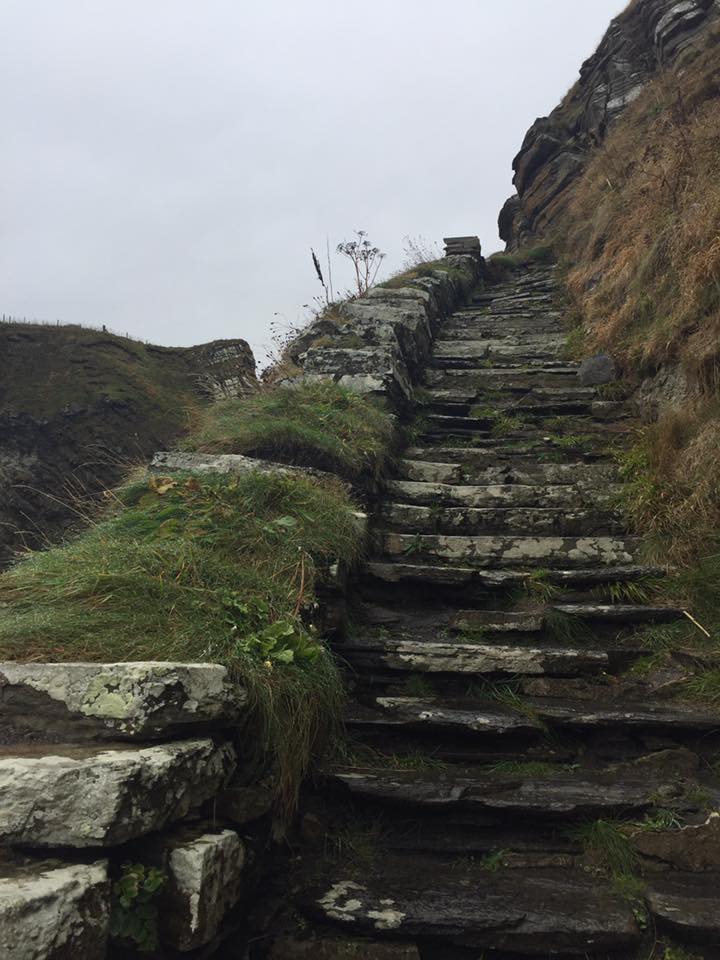 This post first appeared in Seven Days, published by SPP and issued with The Inverness Courier, The Northern Scot and four other titles across the north of Scotland, week ended 12th October 2018.