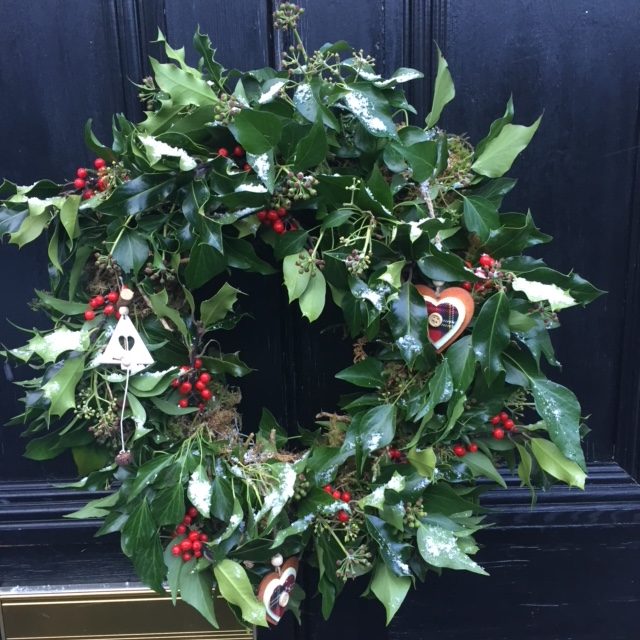 Yes…I did make it myself!

I’d love to say that I’m almost ready for Christmas…so I will. I’m almost ready for Christmas! I’ve made my wreath for the front door, transforming (under expert tutelage at Cameron’s Tearoom and Farm Shop, Foyers) a scrap of chicken wire, a pile of damp moss, and assorted twigs and berries into something worthy of hanging from my front door on a nail.

I have been to the panto at Eden Court, where I laughed like a drain from start to finish, and I have stock-piled enough cheese, wine and port to keep me on the gout ‘at risk’ register until Easter. Presents are (mostly) bought and wrapped, the tree has been chosen and decorated, and there are fairy lights dangling from every nail in the house. I even braved the queues at the post office on Monday to dispatch gifts and cards to faraway family. Can I relax now?

Well, no. Not quite. Because I haven’t yet started to think – beyond the cheese – about what my assembled family and their assorted dietary requirements will eat for the 4-day duration of the festivities. And this year, that’s beginning to cause a little stress.

Because this year, different from every other year when I have successfully catered gluten-free, vegetarian, egg-free, mustard-free, mushroom-free, I am officially trained. Last Friday I spent a day at the Nick Nairn Cook School in Aberdeen. 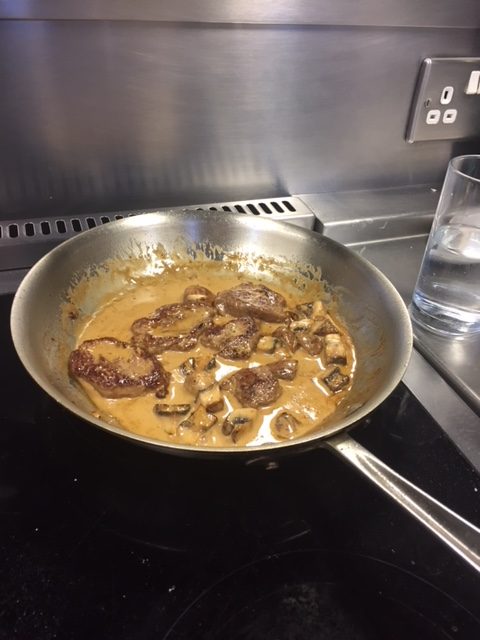 We didn’t make Christmas dinner, unless I decide to ditch Monday’s traditional turkey in favour of fillet steak in whisky sauce. But in spite of that my family’s expectations have been disproportionately raised. They seem to think that after six hours in the presence of the celebrity chef I will have absorbed his talents through my pores. The pressure is on.

I added three new recipes to my repertoire, but more than recipes, we were taught techniques, each adaptable to different ingredients to allow us to create an infinite variety of dishes. “Following a recipe might give you something lovely to eat,” Nick explained, “but you only really start to learn to cook when you properly understand the techniques.”

We learned to sauté, to make an egg custard and to make pancake batter. And on top of that – three important lessons. 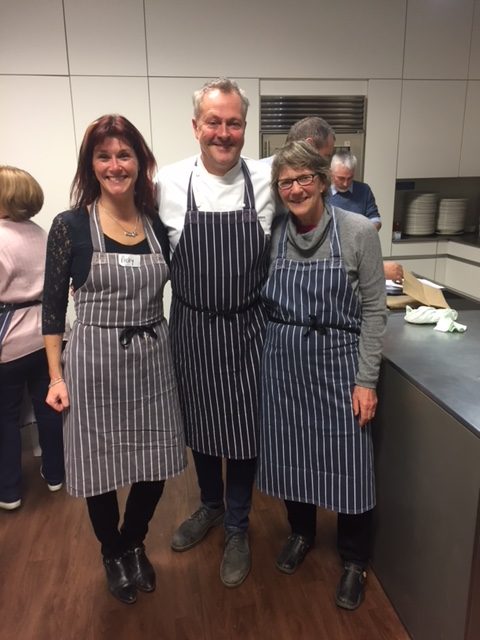 Me, Nick and my Mum

Lesson One was the importance of Active Pan Management. To you and me this means looking at what is going on in each of your pans on the stovetop, understanding (from a sizzle or a bubble) how close the contents are to being ready, and watching “like a hawk” to make sure nothing catches. As he was explaining the importance of being totally immersed in your cooking, the lovely Nick took his eye off his caramel sauce. Which was the perfect cue to his second lesson.

Lesson Two was to learn from your culinary mistakes. Passing a burnt caramel custard through ‘the sieve of shame’ might sometimes save it, but this one was too far gone, so the custard went down the sink and the burnt pan was passed to an obliging sous-chef.

Lesson Three was that preparation is the key to successful cooking. The more time you put into your ‘mise en place’, as the French call it, the easier your cooking will be.

Which brings me back to my original point. Ready for Christmas? Moi? Pass the tattie peeler, will you, I’m going in…

If you have decided against hitting the town this Mad Friday night* (a wise choice, 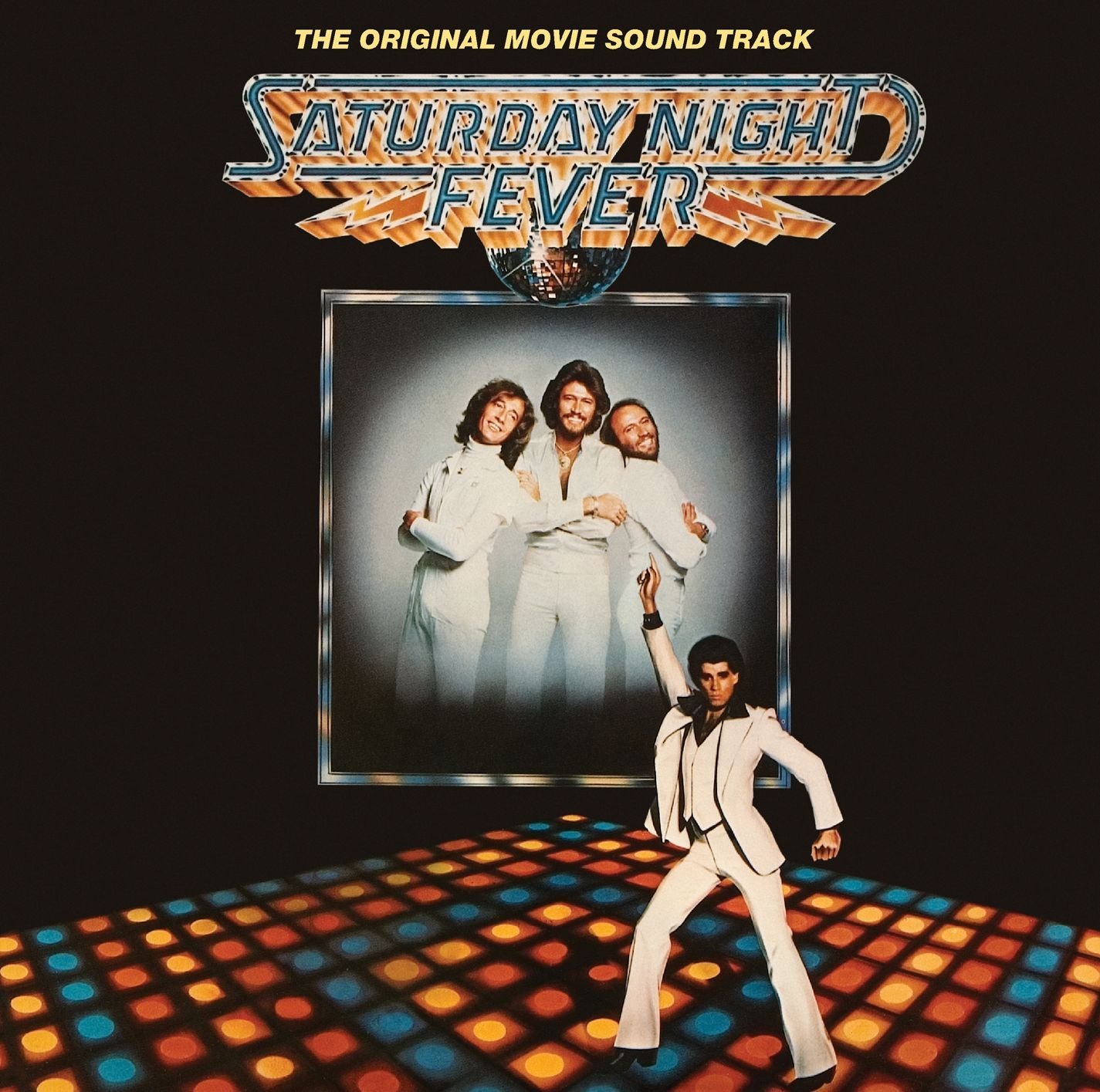 I think, although in my 20s I’d rarely have made it home before breakfast) then can I make a recommendation?

Gather together the people you love, pour yourselves a drink (I don’t mind if it’s from a teabag), settle yourself on the settee for 9pm and tune in to BBC2. The occasion is ‘Saturday Night Fever – The Ultimate Disco’, a 70 minute documentary about one of the best films ever made.

The documentary celebrates – and I apologise, but this news hurts me just as much as it hurts you – the 40th anniversary of the release of Saturday Night Fever, and I was lucky enough to get a sneaky preview of it for a Radio Scotland review. I had my doubts, especially when I heard that Bruno Tonioli was presenting. I sat back in expectation of a low-budget ‘talking-heads’ piece, lazily intercut with clips from the film. “Please no Ricky Gervais”, I whispered at the telly…

But this is a brilliant piece of telly. Saturday Night Fever launched John Travolta’s film career, revived the fortunes of an out-of-favour Bee Gees, and became a cultural phenomenon. And the documentary more than does justice to the film, with insights and recollections from John Travolta and fellow cast members, Bee Gee Barry Gibb and producer Robert Stigwood, as well as the myriad of crew; the location manager, wardrobe mistress and writer who pulled the film together on a shoestring budget.

This is a fitting and intelligent tribute, which sets the film in context of the social history of 1970s Brooklyn, and tells the story of how the film nearly wasn’t finished. Miss it at your peril.

And if you do happen to be out on Mad Friday and end up on the dance floor, Travolta’s 40 year old moves will almost certainly have been amongst your party-night repertoire. Your Saturday morning should be spent watching it on catch-up. A bacon sandwich, pot of tea and that soundtrack will cure all the ills of the night before, guaranteed.

* I appreciate you’ll be reading this online AFTER Mad Friday – but it’ll be on iPlayer – don’t miss it!