This week, the last of January 2020, has been book-ended by two emotional dates. On Monday we saw incredibly moving scenes as survivors of the Holocaust gathered in Auschwitz to mark the 75th anniversary of the camp’s liberation. And on Friday at 11pm the UK formally left the EU.

We can never know what they endured 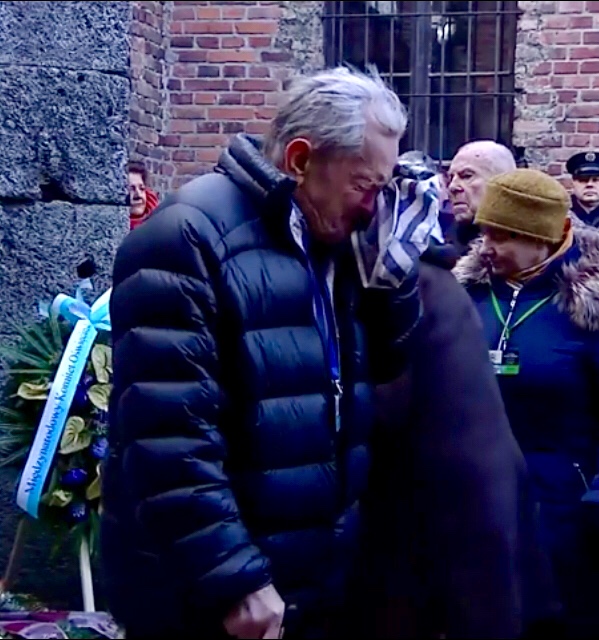 You may have watched Monday’s news coverage and read interviews with some of the Holocaust survivors. I was holding it together until I saw the face of an elderly gentleman as he turned towards the cameras. He had waited patiently in line to pay his respects at a memorial. Underneath his warm padded jacket, he was wearing the infamous ‘striped pyjama’ uniform of the concentration camp.

He had removed his striped cap while bowing, then used it to wipe the tears from his eyes. His face showed more pain and grief than it is possible for me to convey. There was an understanding among those around him; a woman hurried to support him and a gentleman half-smiled in sad recognition. We can never know what he endured, but it’s important to try and understand.

Was he liberated from the camp? 7000 prisoners, 90% of them Jewish, were discovered behind the fences of Auschwitz when Soviet forces liberated it on 27th January 1945. Disease-ridden and starving, fewer than half of them survived. 60,000 Auschwitz prisoners had recently been taken on Death Marches to concentration camps in Germany, in an attempt by the Nazis to hide their crimes. Auschwitz’s main gas chamber had been destroyed too.

Originally a Polish army barracks and taken over by the Nazis in 1939, Auschwitz became a complex of 40 concentration and extermination camps. It is estimated that at least 1.3 million prisoners were detained here, and that around 1.1 million of them were killed. Auschwitz was just one of many camps. In all, over 6 million Jews – 70% of their European population – were killed following Hitler’s orders to ‘cleanse’ Europe of Jews.

It’s almost impossible to comprehend these numbers. Does it help to compare with Scotland’s current population of around 5.25 million? Not really. Individual stories have significantly greater impact than statistics.

Sky News interviewed 93 year old Auschwitz survivor Alberto Israel. His parents and brothers were killed, as was every single other Jewish person from his home on the Greek island of Rhodes. In a clear, steady voice, talking straight to the camera, he explains: “For all the people that survived, those that I’ve spoken to, the most horrible thing for us, the worst punishment of all, are the nightmares. I can’t stop them, even today. They threw babies that were alive into the oven. And when you’ve seen that, and you ask me whether I can sleep… sleep? How could I sleep…”

Who will ‘bear witness’ in years to come?

While Alberto’s horrific memories keep him awake at night, so do his fears that the same thing may happen again. He is one of many Holocaust survivors who vowed to ‘bear witness’ and who tour schools and universities, talking about their experiences. But with the Holocaust now 75 years ago, there are few still alive to do that.

From 11pm on Friday night the UK is no longer a member of the EU. Thankfully that moment passed without Boris’s ‘Big Ben Bongs for Brexit’, but it also passed without any real idea of what’s next. Until we have negotiated our withdrawal, which might be on 1st January next year, but could be later, we’ll still be subject to EU laws and regulations, although with our MEPs all sent home, we’ll have no say in what those might be.

I am sore, although resigned that we’re now on the outside looking in

I’m a proud European Scot – I voted to remain in the EU and am sore and sorry, although resigned, that the UK is now on the outside looking in. We’re on the outside of an organisation that was created not just for economic reasons, but for peaceful, political ones too. Let’s not forget the EU won the Nobel Peace Prize in 2012 ‘based on the stabilising role the EU has played in transforming most of Europe from a continent of war to a continent of peace’.

Maybe I’m reading too much into this – maybe I’m just worried about the uncertainty of our future out with Europe. But the image of one broken elderly gentleman wiping away his tears of anguish with a striped cap, and another who bore witness to live babies being thrown into ovens, tells me that we can’t go back there. We just can’t.