I first wrote this piece in September 2015 after a trip to Dundee to see ‘The Cheviot’.

As I’m getting ready to head out to see the revival by the National Theatre of Scotland at Eden Court this evening, I thought it was worth wheeling this out again… I still laugh at the story at the end!

The Cheviot, the Stag and the Black Black Oil is one of those plays that I have a problem with. Not a problem in the sense that I dislike it, disagree with its message or feel that it is over-hyped; my problem is that having grown up with it, and with it being such a big part of the Scottish political narrative in the last 40 years, I couldn’t remember whether I had actually ever seen it. Maybe I saw the film, or watched a documentary about it? Maybe I had just talked to people who had been part of it? 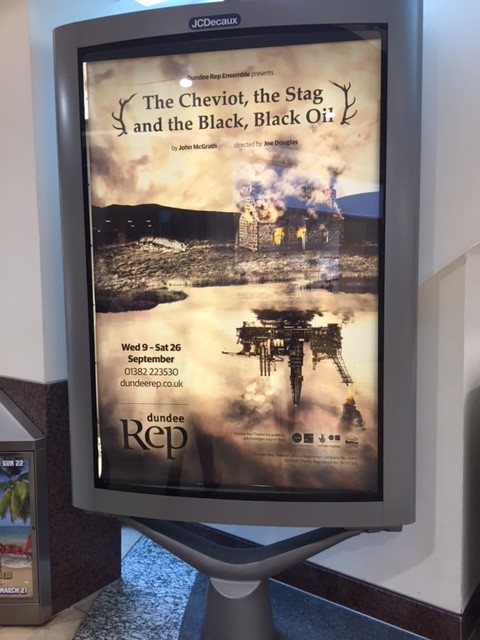 Poster for Dundee Rep’s revival of The Cheviot, The Stag and the Black Black Oil

When I was in Dundee recently I noticed a poster; Dundee Rep were reviving it. I decided the time had come to properly join in with the conversation, so Mr Marr and I made a flying visit to catch the production one night last week. Six hours in the car to hear the story of 300 years of Scottish history. It had a lot to live up to.

The performance was brilliant, and well worth the journey. And my nagging question was answered; no, I hadn’t seen it before.

So what’s it all about? Written in 1973 by Liverpudlian playwright John McGrath, it’s the anti-Capitalist story of three episodes in which the Scottish people have been exploited. The first time was in favour of the Cheviot – the robust breed of sheep for which so many Highlanders were cleared from their homes by, amongst others, the first Duke of Sutherland. His statue still, of course, controversially towers over much of East Sutherland from the top of Ben Bhraggie. The brutality and mindlessness of the landowners during the Highland Clearances was graphically depicted in the play, stirring anger and grief in the audience.

The second episode, the Stag, is about land ownership, and the use of great swathes of Highland land as playparks for the rich – they come to hunt, fish and shoot, with little regard for the local people. Although written in 1973 the lines resonated with today’s audience, and brought to mind the arguments currently being rehearsed on both sides of the proposed SNP Land Reform Act. 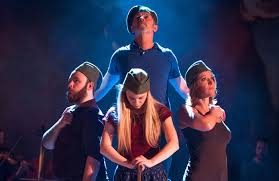 And the third episode? This concerned the handing over of rights to Scotland’s ‘black, black oil’ to those who had the means and ability to extract it when it was discovered in the mid-1960s; Texan oilmen. Too busy carving up the seabed into 100 square-mile sections, the UK Government failed to consider the potential to achieve a future legacy for Scotland. In the play the Texans delight in selling our oil back to us at four times the price they paid for it. The script could have been written for some of last year’s Independence Referendum debates.

Highland Clearances, land ownership and the oil industry. They’re hardly the ingredients of a great night out. But in spite of its subject matter the production was wildly entertaining, raucously energetic, thought-provoking and hilarious. With scant regard for the traditional ‘fourth-wall’ of the theatre, the production takes the form of a ceilidh, with a bar (selling whisky) on stage, and with the 10 strong cast grabbing audience members up to dance, sing along or recite lines at points throughout the evening. 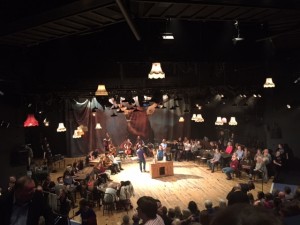 We talked about the play all the way home; about its roots during the first ‘modern’ rise of Scottish Nationalism in 1973, about its revival in 1991 as a counter to Thatcher’s treatment of Scotland, and about its resonance today. It’s a historical script with relevance for the here and now, and is for all of us, not just (as you might suspect) Socialist supporters.

And the good news is that thanks to the audience response to this revival, there are tentative plans afoot for Dundee Rep to tour it. In 1973 it played in village halls across the Highlands and Islands. In 1991 it again toured ‘home’ to the Highlands, and the hope is that it will do so again.

My advice is to see it if you possibly can. You won’t necessarily agree with all of it, but you’ll come out feeling informed and entertained. And there’s even a singalong. All of which adds up to my definition of a great night out.

Straight back down to earth

There’s a tale which surrounds the original 1973 Highland tour of The Cheviot, The Stag and The Black Black Oil which may not be true, but is nonetheless still worth telling. The theatre company was 7:84, founded by John McGrath and so named because of a 1966 statistic that 7% of the population of Great Britain owned 84% of the wealth.

McGrath had not only written and directed the play but he toured with the company too, driving around in an old Jaguar which bore the 7:84 logo. Stopped in an unnamed Highland village a local asked him what 7:84 meant and John rattled off his statistic.

The old bloke stopped for a minute, considered John, and took a good, hard look at the playwright’s car.
‘Well Son, there’s no need to boast about it’, he said. And he was off.