Answer this honestly – as a child, what did you want to be when you grew up? And when you look at what you do for a living now – do you recognise those dreams? Is this the career you planned for yourself, or did you just happen to be in the right place at the right time? Maybe you’re looking for change.  Unless you have followed your passion or undertook vocational training which set you on the right path, the chances are that it’s a bit of a lottery how you ended up in your current role. 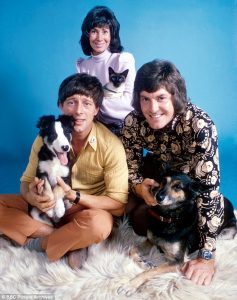 The ‘Blue Peter’ of my dreams…

When I was a kid I wanted to be a Blue Peter presenter. Being paid to experience all that travel and adventure really appealed to me, as did making models from sticky-backed-plastic and Fairy Liquid bottles. But I never told anyone, and qualified as a solicitor instead. How I came to be writing, broadcasting and hosting events across Scotland is a long story, but the chances are that your own career is as full of twists and turns as mine.

But after chatting to Magnus Houston, the MD of Fishbox and Coast & Glen, I am revising my definition of ‘varied career path’, and wondering if I need to add another fork to that path. Because who would have imagined that a once professional Superbike rider who didn’t really like fish would now be the award winning MD of two Highland based seafood supply businesses with 24 employees? Certainly not Magnus. 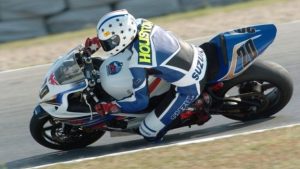 Growing up in Strathrusdale near Ardross, Magnus became passionate about motorbikes. From scooting around on the family croft on failed-MOT mopeds from the age of 12 he developed a talent for racing, which took him to world championship level. Disaster struck when his pelvis was smashed in a crash which cost him not just intense pain, but his contract with Suzuki. Broken and aimless he limped back to the Highlands, uncertain of what to do next.

Part of Magnus’s rehabilitation was cycling, and that became his next passion. A skilled mechanic he was snapped up to work in a cycle shop where, as luck would have it, his future wife Fiona popped in to buy a bike. On holiday on the west coast Magnus met a lobster fisherman. One trip out in the boat, and – no pun intended – he was hooked. Without a second thought he bought a boat and 125 lobster pots, and launched in Cromarty.

This ‘can-do’ attitude combined with access to the internet was a winning combination. He looked to YouTube for tutorials on everything from tying knots and splicing rope, to reading the seabed to understand where lobsters were likely to hide. He was soon selling a healthy weekly catch to a distributor in Lairg, but delight turned to dismay when he realised everything was being exported. Wouldn’t it be better gracing local plates? 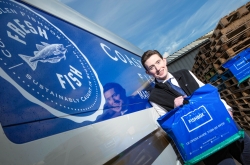 Magnus with his fish boxes.

Magnus dropped into the hotels and restaurants he passed daily between Inverness and Cromarty and started selling directly. From those five initial customers, Coast & Glen (the game supply is a nod to his rural roots, ‘’I understand venison,’’ he says) now supplies over 300 establishments across the Highlands and Islands, plus big name chefs Gordon Ramsay, Albert Roux and London’s seafood specialists The Wright Brothers.

The sole aim is to get fish from the sea to the customer in less than 48 hours; something he does for his 1600+ individual Fishbox clients too, who subscribe to receive regular deliveries of portioned fresh fish and shellfish to their doors.

Where does Magnus’s business confidence come from? He confesses he doesn’t know. All he and Fiona (who has joined him in the business) know is that they want to supply great quality fresh fish to their customers in a way that is best for both producer and customer. Magnus also now loves eating fish and shellfish – three times a day sometimes – because the product he supplies is a far cry from the supermarket fish his mum used to buy. ‘’It amazes me that they’re allowed to call it the same thing!’’ he says.

From a whim to buy a boat and a desire to supply fresh fish to everyone who wants it, Magnus and Fiona have created a wonderfully successful enterprise. Their aim is for the business to expand, but not at any cost; responsible sourcing is a big issue for them, as is the future of the fishing industry in Scotland – they have also been working with the University of Stirling to produce an algorithm to create a ‘pick-pack’ process that allows the business to operate with zero waste.

It’s inspiring to meet a young entrepreneur like Magnus and I wish him and Fiona well. And it makes me wonder. Do I have the energy and passion to start again? I’ve probably missed the boat as far as becoming a Blue Peter presenter is concerned, but there’s a desire now, sparked by Magnus’s energy, to create something new and sustainable which brings pleasure to others and jobs to my local area.

It’s good to have sorted that out. Now all I need is the right bright idea…