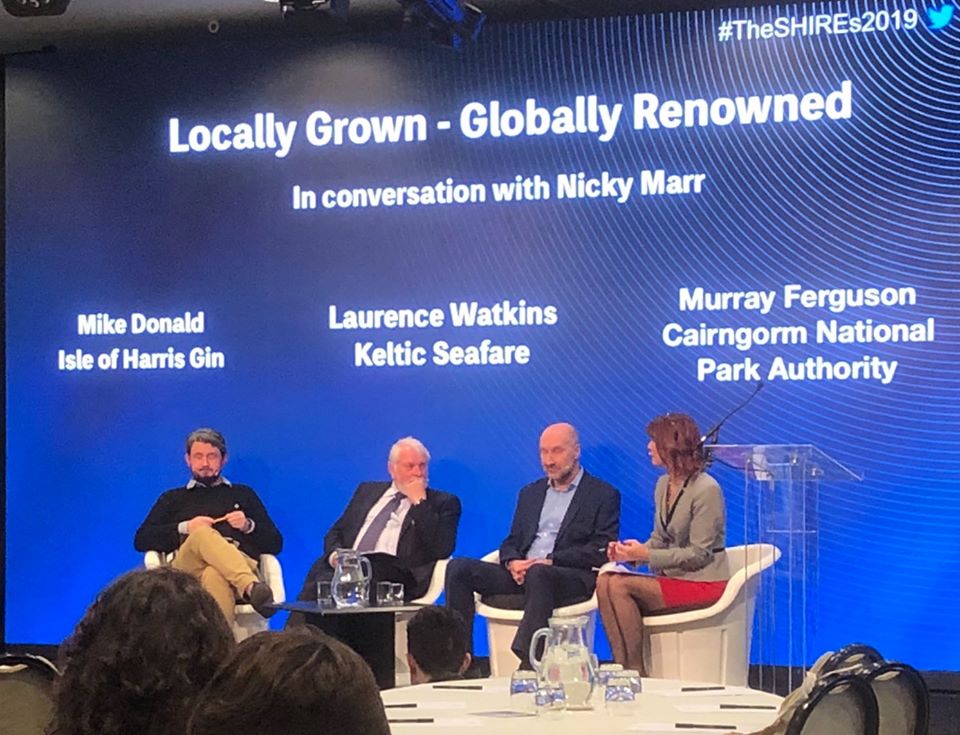 Mike from Harris Distillery. Laurence from Keltic Seafare and Murray from CNPA ‘in conversation’ with me about the rural economy

Did you hear the one about the distiller, the shellfish processor and the National Park Planner? No? Well maybe you weren’t at the Kingsmills Hotel in Inverness last Thursday for the first Scottish Highlands and Islands Rural Economy Conference.

It wasn’t a joke, but a conversation I had with three key players in the rural economy; Mike Donald is ‘Chief Storyteller’ at Harris Distillery, and proud owner of the best job title of the day, Laurence Watkins co-founded Dingwall-based Keltic Seafare, who supply live shellfish to some of Europe’s top restaurants, and Murray Ferguson is head of Planning and Rural Development at Cairngorms National Park Authority.

I’m no economist, but my job was to get them to distil their vast and various experiences of working in some of the most rural parts of Scotland, into an hour-long chat to entertain and inform our audience.

But why were we debating the rural economy of the Highlands and Islands? Surely that’s just small fry when compared to the rest of the Scottish economy? And isn’t economics a bit boring? Actually – it’s a ‘no’ on both counts.

What’s so important about the rural economy?

Until recently the extent of the modern rural economy hadn’t properly been recognised. But we now know that Scotland’s rural economy creates a third of our national income. That figure is even more impressive when you realise that only 20% of us live in rural areas, so we’re punching well above our weight in terms of economic impact.

When we think of ‘rural’ most of us imagine farming and fishing, land management and forestry. These are still the backbone, but the modern rural economy comprises so much more.

It includes tourism and adventure businesses, food and drink, creative industries, digital/cyber industries, charities and the third sector, plus renewable energy businesses. Have you heard of the blue economy? Until I was preparing for this conference, neither had I; seemingly it includes everything to do with water – that’s aquaculture and shipping, offshore energy and water-based tourism businesses. ‘Blue’ comes under the umbrella of ‘rural’ too.

It’s about more than just money, it’s about homes, communities and schools too

When you begin to add it up, it’s clear that the rural economy is important, but as we heard at conference, it’s about more than just money – It’s about providing jobs that will encourage young, talented people to stay in our remote communities. In turn that will allow schools to stay open and shops to thrive, keeping the beating heart of Scotland’s small places alive. Without a decent understanding of the rural economy, there’s little understanding of how our remote communities can continue.

Far from just being a way of supplying famous-name chefs with top-quality shellfish, Keltic Seafare collect hand-dived scallops and creel-caught langoustines from one-man boats across the west and north coasts of Scotland and transport them to their Dingwall depot for processing. It’s logistically complex, not helped by unkind weather. Crucially, as well as supporting jobs in Dingwall, the company supports fishermen to live and work on the fringes of our mainland and islands.

Harris Gin is so much more than a lovely drink in a pretty bottle. When the distillery launched in 2015, they hoped to create 20 jobs by 2020. Already they employ 40, many jobs going to young people who would otherwise have left the island. The success of Harris Gin is being replicated by other nearby businesses; Essence of Harris are now exporting their candles to China, and Loomshed Brewery launched a few weeks ago. Positivity is infectious, although affordable housing remains a challenge. 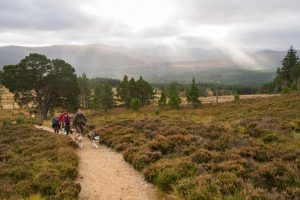 And as for the Cairngorms National Park Authority, it’s much more than just a great place to walk, cycle, ski and enjoy nature. It attracts visitors from all over the world, many of whom come to experience its tranquillity, its natural beauty and its wildlife.

Those tourists need to be looked after and they need things to do. The people who provide those services need homes and shops and health-services, and their children need to be educated, which in turn creates work for non-tourism based industries. The balance needs to be carefully managed; too many tourists and workers could spoil the fragile environment the visitors come to experience; Murray’s job in planning requires him to be mindful of where that tipping point lies.

Rural economics might sound dry and dusty, but that couldn’t be further from the truth. Buying a locally distilled gin impacts directly on the school roll in Harris; that’s not boring. Nor is eating top quality scallops, once you realise they are allowing a diver and their family to live where they choose. And paying the £2 charge to park in the official car park, rather than on the verge at the side of the Loch Morlich road, is doing more to support the way of life of the National Park than you might have imagined.

So, spend your pounds wisely. Choose to shop local and take a local holiday. The impact is huge.