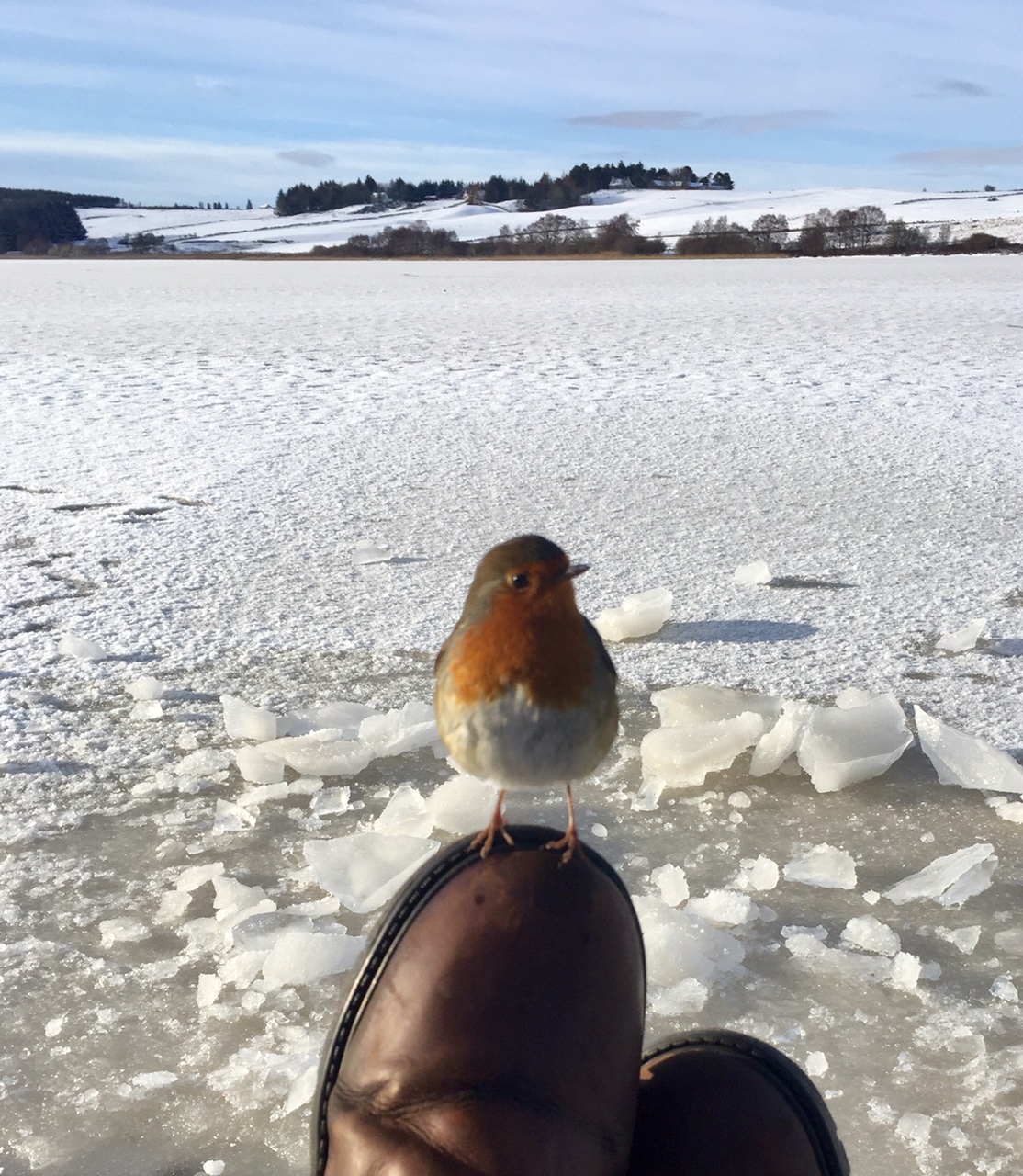 Sitting at the side of another frozen loch last weekend, wrapped in layers of thermals, we were joined by a robin. My sister and I had been dunking ourselves into icy water again, and this was our post-ice-bath treat, a flask of hot chocolate, spiked with a shot of coffee for added flavour, and a huge slab of freshly baked gingerbread.

It was her turn to bring cake, and because she’d taken it from the oven just minutes before leaving the house, it was not cut into neat slices, but was an inelegant chunk, wrapped in greaseproof paper and foil. We broke bits off, greedily. The crumbs must have been what attracted the robin.

He was either hungry or curious – in fact, he was probably a bit of both. But he was fearless. Flitting about from my feet to hers, he picked up whatever treacley morsels fell from our fingers. To tempt him to stay, we broke little pieces off and placed them in the snow nearby. He rewarded us with his presence and kept us under scrutiny with his black, beady eyes.

The morning was a rare one; cold, crisp, and blue-skied, with not a breath of wind. Lockdown has been cruel in so many ways but, like in May and June when the sun shone endlessly, these glorious winter days we’ve been having make everything a little more bearable, and a lot more beautiful. The snow even covers the weeds and bare patches in the garden too, making it look better cared for than it is.

Just before I left the house that morning, Matt Hancock had issued his stark warning that we might have a ‘long, long way to go’ before restrictions can be lifted. It’s easy to become downhearted by the thought of another six months of this. But sitting in the almost-warmth of the winter sun, surrounded by trees, and hearing nothing but birdsong, I felt more grateful than ever to live in the Highlands, and to have lochs and coastline within a few miles of home. We were out for three or four hours. We barely saw another soul. As long as we can still exercise outdoors, it will be bearable.

My sister. Another keeper of family recipes.

It wasn’t just the loch, the day and the company that was special, though, it was that dense, fresh, treacley gingerbread. Because like me, my sister is another keeper of family recipes. While my go-to bake from our childhood is Mum’s iced ginger shortcake (fans of Kirsten Gilmour’s ‘The Mountain Café Cookbook’ will know it as ‘Ginger Crunch’), my sister bakes our Mum’s gingerbread. Originally the recipe belonged to Mum’s Auntie Jenny. I can only just remember her. 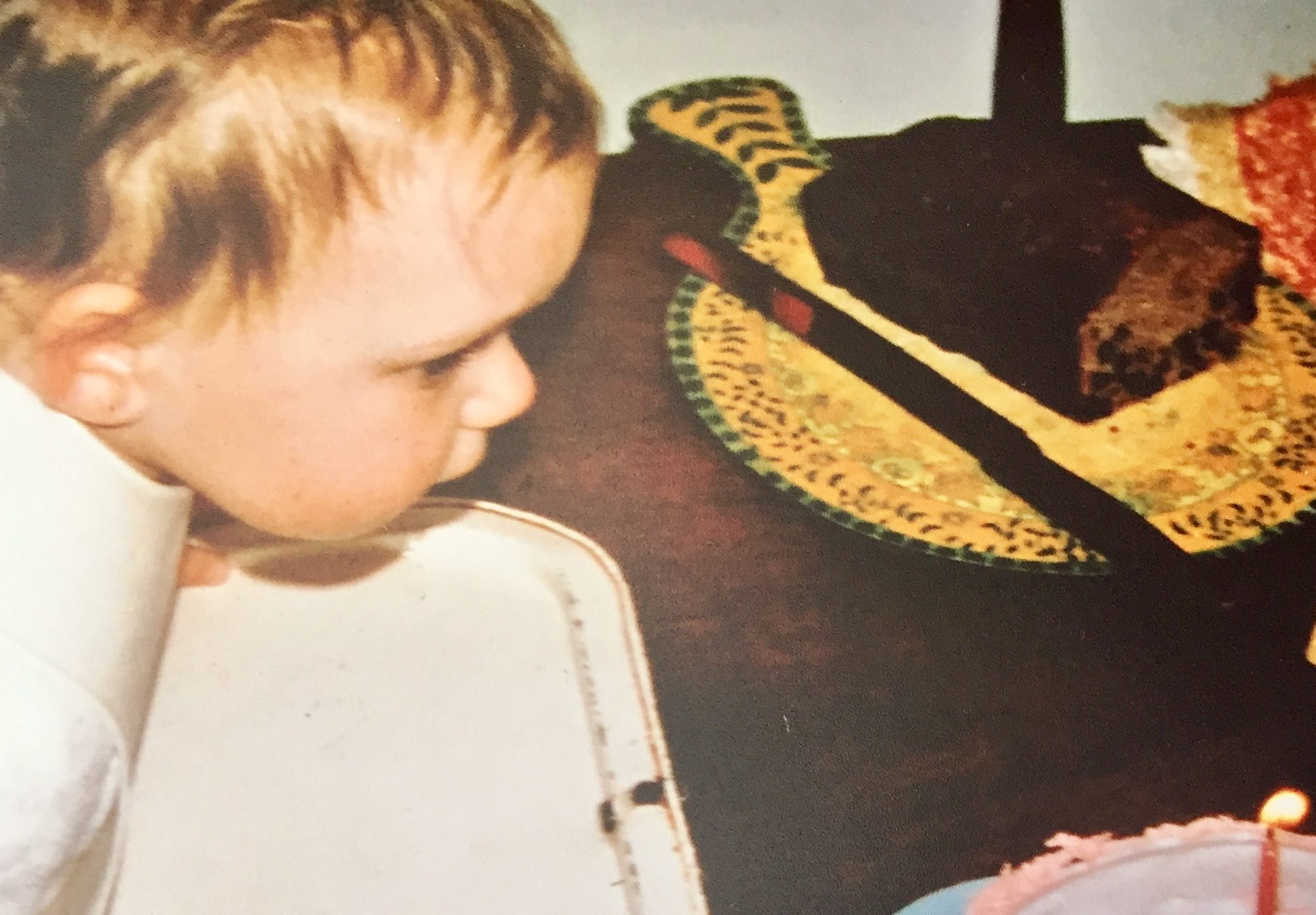 Tasting that gingerbread for the first time in maybe 30 years took me straight back to our childhood kitchen. There was often a gingerbread on the go – that, or a fruit loaf. Photos of our birthday parties always showed one or other on the table, always on the green and yellow flowery chopping board.

Old photos also show that the fruit usually sank to the bottom (sorry, Mum!), but the loaves were no less delicious for it. These calorie-laden treats, sliced and spread thickly with butter, were the mainstay of camping holidays too. To make it last we were only ever allowed a single slice. 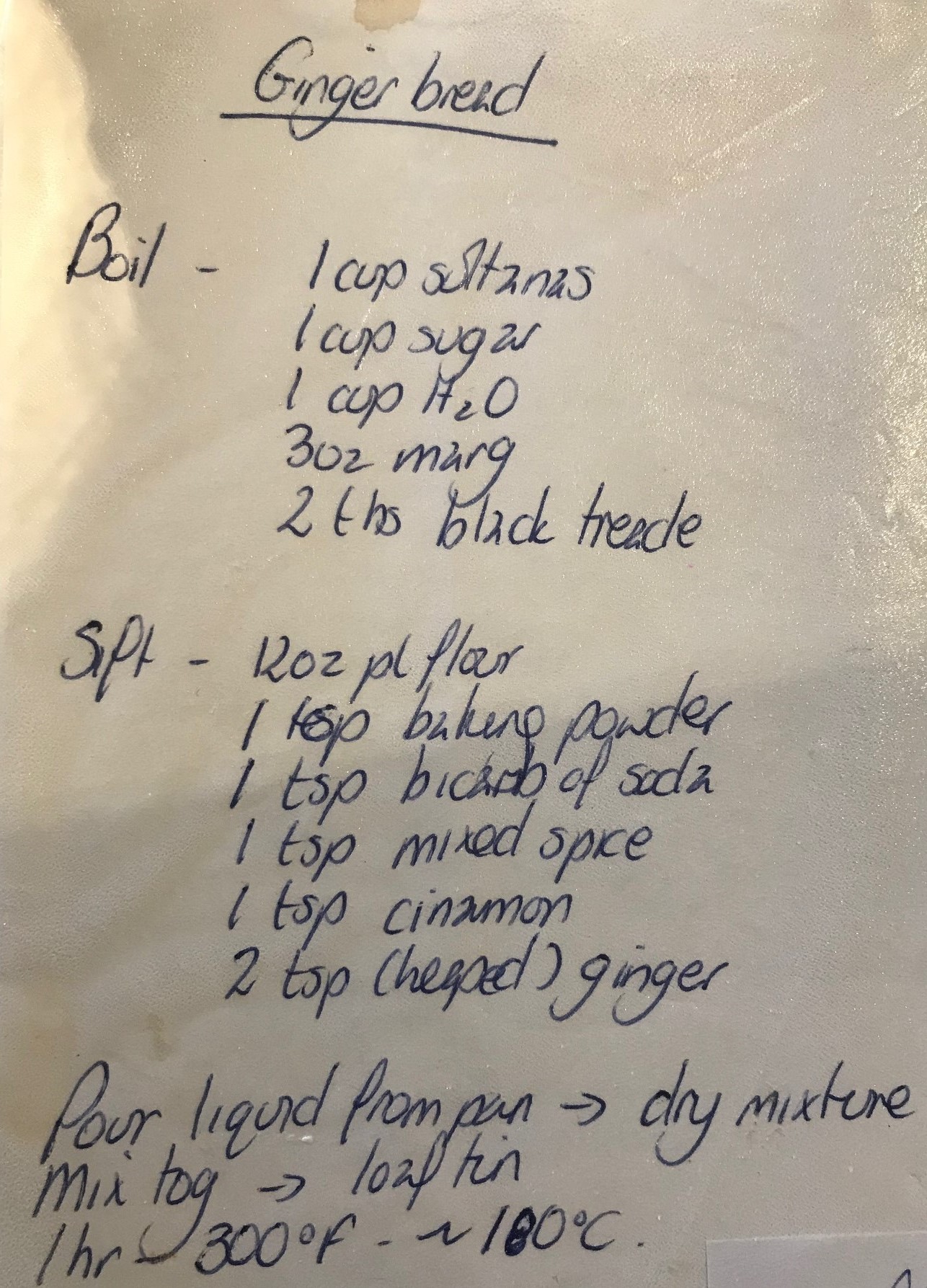 Auntie Jenny’s gingerbread recipe. Allow me to share it with you too.

Auntie Jenny’s gingerbread recipe is straightforward. Sultanas, sugar, treacle, water and margarine (I suspect I’ll use butter) are boiled together on the hob before being mixed with flour and spices – ginger, cinnamon and mixed spice. Then the whole sticky mess is baked for an hour, before – if you have the patience – being cooled in the tin. It’s on my baking list for this week.

We’ve all turned to things that bring us comfort during this pandemic. No small wonder. It’s been tough on everyone. My sister’s version of Auntie Jenny’s gingerbread, eaten in the snow and the sun with a robin for company, was perfect, both in its flavour and in the memories it brought back.

Pleasure comes when we cook old family recipes, but also when we get the chance to pass them on. Here’s that recipe from our family. Enjoy it.

And I can’t tell you how much it means to get a call from one of our girls, asking for a recipe of mine so they can cook it for their friends. It makes me feels as though I got at least some bits of motherhood right. I’m collating their requested recipes into folders for them. Auntie Jenny’s gingerbread is being added too.

This is published by Highland News and Media in six of their newspapers across the north of Scotland. If you can, please support print media and the future of journalism by buying a paper!

If you’d like to receive my mutterings in your email inbox every week, why not subscribe? It’s completely free, with no spam, ads or other undesirables. All I need is your email address, which I’ll never share.

Constructive feedback and comments are welcome, as are your stories and plans. Stay safe and well.