I’ve had picnics in some fairly unusual places –on the tops of mountains, on beaches, and sitting in the car sheltering from the rain. But none has been a more spectacular than on the deck of a lifeboat in the Moray Firth as the sun set last week.

There was barely a breath of wind as we tucked into sausage rolls, cake and steaming mugs of tea, and hardly a crumb was left. Being buffeted by the blades of a Search and Rescue helicopter as it flew just ten feet above my head on the bridge of the Invergordon lifeboat was surprisingly hungry work.

It is an incredible privilege of my job that I can gain access to the Search and Rescue teams who operate in the north of Scotland, who risk their lives to save others. And I couldn’t believe my luck – more than simply interviewing the Maritime and Coastguard  Agency Crew who operate the search and rescue helicopter out of Inverness Airport,  I was invited to experience one of the training drills which they undertake with RNLI crews from Kessock and Invergordon. 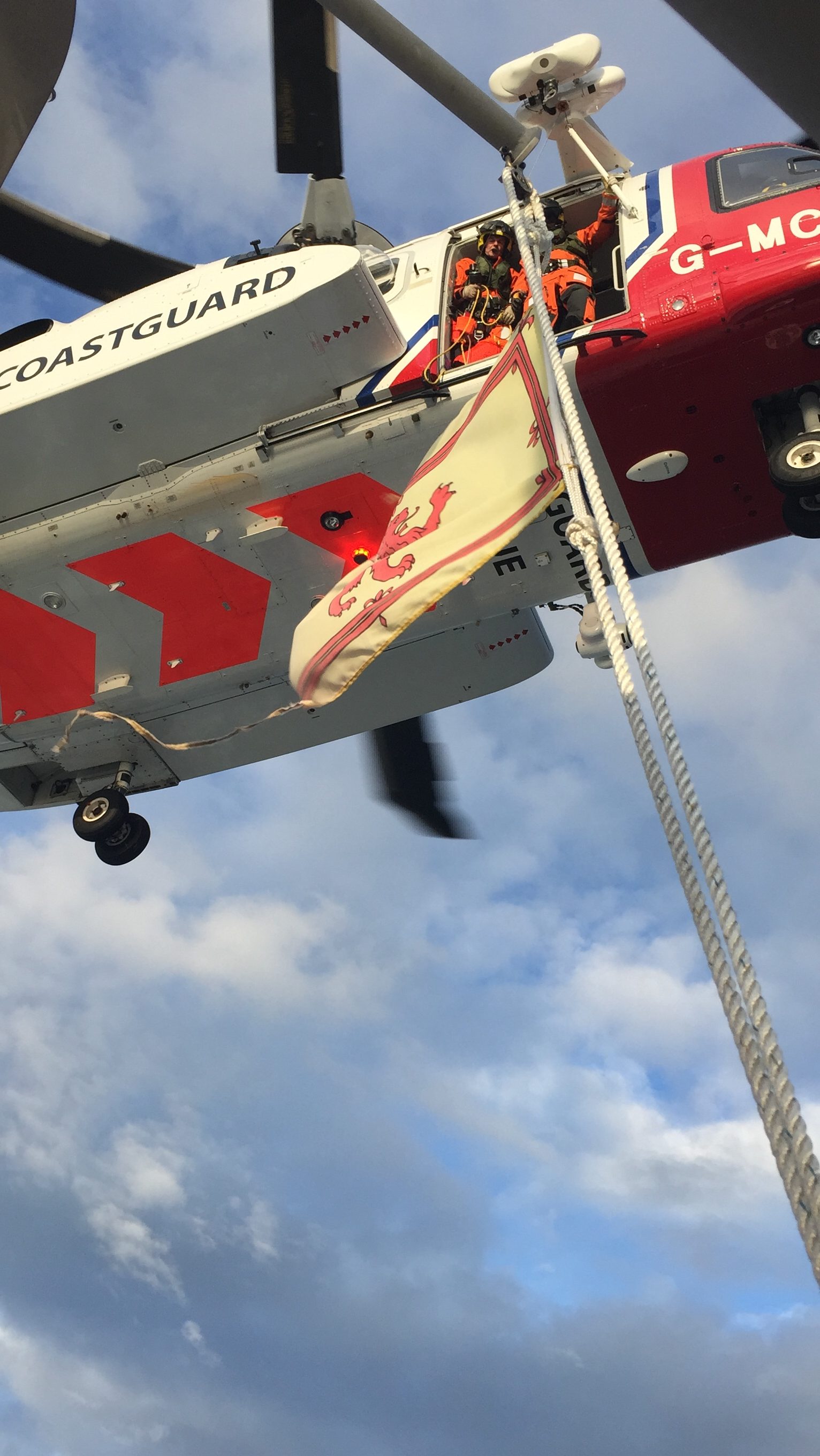 Of course I then wanted to go in the helicopter – to fly above the Moray Firth – what a thrill! But my enthusiasm was rightly placed in check – for very sensible health and safety reasons I’d have to be strapped into a seat at the rear of the cockpit, from where I wouldn’t be able to see what was going on. Far better if I could watch everything unfold from sea level.

I’ve been on the Kessock lifeboat before – in fact I’ve been thrown overboard by the crew into the Moray Firth, and abandoned for all of five minutes before being rescued. Chatting to the crew then, I was struck by how dedicated every member of the team is. I was struck by that again at Invergordon.

Unlike the four emergency services – Coastguard included – lifeboats are crewed entirely by volunteers, who give up their time not just to go on ‘shouts’ in response to their 24/7 pagers, but also give up a night every week for training. That training might be in navigation, in rescue techniques, in skippering or maintaining the boat. Or it might be in first aid – each crew member is trained to just below what would be expected of a professional paramedic. And there’s more – the crews are also involved in raising funds to keep their boats and equipment fully maintained and fuelled – RNLI relies entirely on public donations. 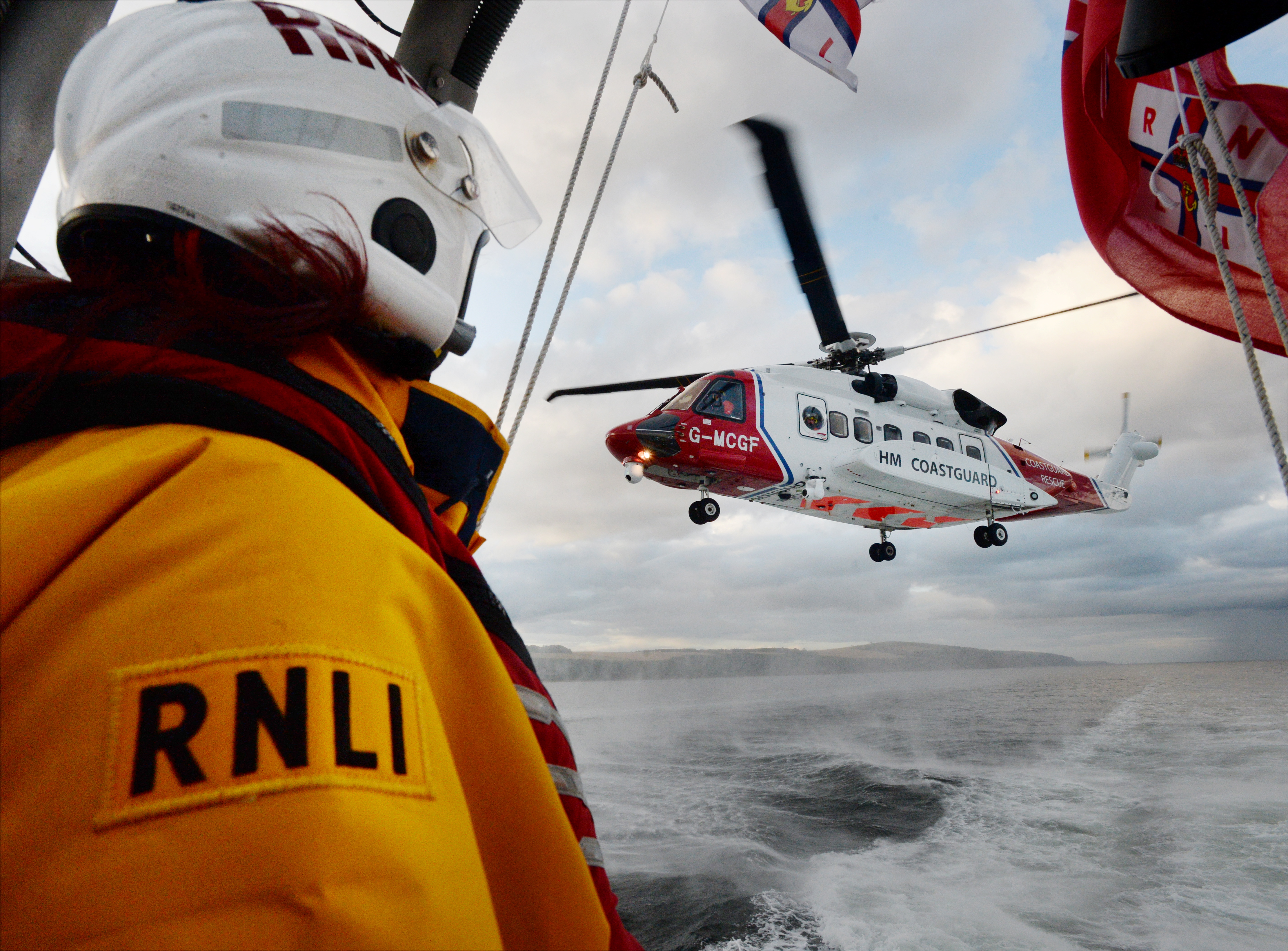 As we kitted up in wellies and thick, warm waterproofs (thanks to A&E nurse Mairi for the use of her kit) I chatted to the seven of the 21-strong squad who had turned out for the drill. Michael is the Invergordon Station press officer – it’s a good fit, given his day job in web design, PR and marketing. Alan was our coxswain for the evening – he’s a hydro engineer. Simon and Charlie both work in a distillery, Emma has a job at the Port Authority and Big Ken on Radar is an HGV driver. Happiest in the engine room – it was seriously noisy in there, even with ear protectors on – was HGV mechanic Rob.

Our rendezvous with the Bristow helicopter was looming so we nipped along the Cromarty Firth, past the buoy marking the war grave of HMS Natal, between the Sutors, to the Moray Firth…and the resident dolphins. The Kessock lifeboat came into view, and soon afterwards we spotted the Coastguard helicopter. The drills began. 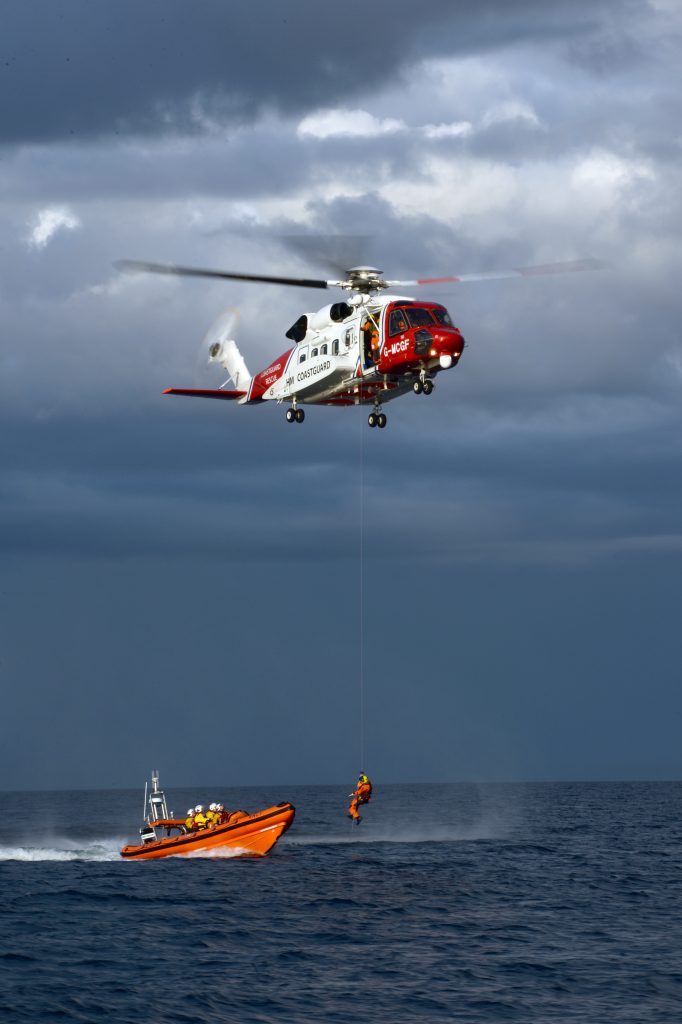 As we sped towards Fort George the helicopter came overhead and winched a crew member onto the Kessock lifeboat – he was soon winched up again. With amazing accuracy the exercise was repeated with our lifeboat, with Winchman Paramedic Duncan Tripp landing inch-perfect on our deck as we made good speed along the Firth. A stretcher with a dummy casualty was landed, then safely returned to the helicopter. Then we travelled together at amazingly close proximity – could I have touched the underside of the helicopter if I’d reached up?

The sound was deafening, the professionalism and precision impressive, and the setting was beautiful. There were rainbows all around as the spray whipped up by the helicopter blades was caught the setting sun.

But how different it would have been in the dark, in 40 foot waves, in gale force conditions, with real casualties to be rescued. Our dummy was beyond help – an injured sailor or stranded child would be a very different matter.

After our picnic and as we motored back among the oil rigs to harbour, I asked if any of the crew had ever been reluctant to respond. And their reaction didn’t surprise me. The crew spoke almost as one: ‘It’s what we train to do. We’re here to save lives’. ‘

So while my trip was a fantastic experience, that’s the real message. These crew members routinely risk treacherous conditions to save others. And that deserves our utmost respect. 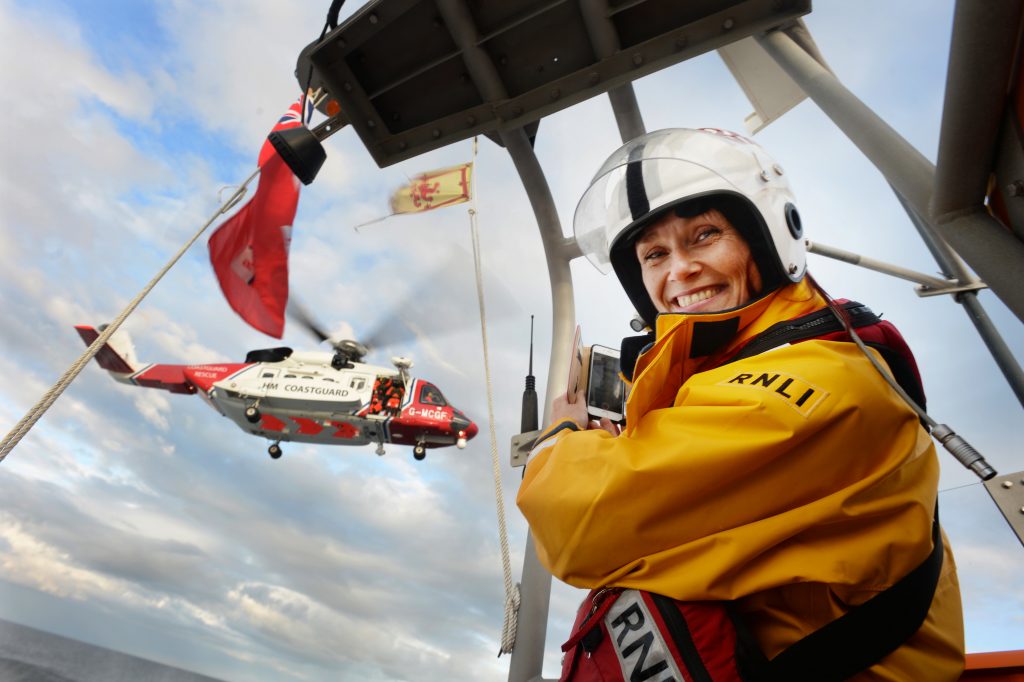