If you’d watched me reading the story about traffic police in Nairn pulling over ten motorists for driving dangerously close to an unmarked police cyclist, you might have seen me punch the air. It’s not that I take delight in the misfortune of others – far from it. But I’ve been banging on about road safety for cyclists for a while, and it’s great to see something being done about it.

As a cyclist – and as a motorist and pedestrian too – I am sick of the arrogance of drivers who believe cyclists shouldn’t be allowed on the roads. So, it’s quite right that those who break the rules should be pulled over and have the potential impact of their actions spelled out to them. In a battle between a car and a cyclist, the cyclist can never win.

How many dangerous drivers are out there?

But as the detail of that news story began to sink in, you might also then have heard me sigh. During just one shift on one day in one small Highland town, traffic police had to stop ten drivers, take time to explain the Highway Code to them, and – using a special mat which shows how much room a cyclist needs to be safe – demonstrate to them how they should have been driving. Traffic police caught ten that day. How many other dangerous drivers are out there?

If you want to know the answer to that, ask a cyclist. And the answer you’ll get is that there are far too many. I have four friends who have been hospitalised after being knocked off their bikes by cars. I’ve never been hit, but several times I’ve been forced into a ditch by an oncoming or passing car – usually on a single track road between passing places. Each time I’ve been cycling on my own, each time the driver has carried on, either oblivious to my fall, or not caring that I might be seriously hurt.

Cyclists have every right to use the roads 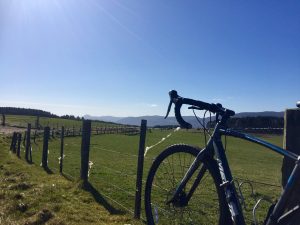 Cycling is a pleasure, but it can be dangerous too. I’ve been forced into the ditch more than once close to here – the summit of Essich Hill, south of Inverness

The bottom line, whether motorists like it or not, is that cyclists have every right to be on the road. To those who quote the ‘road tax’ argument, I remind them that drivers don’t pay Road Tax either. Road Tax was abolished in the UK in 1937 and replaced by Vehicle Excise Duty, which is based on emissions. Cycling is emissions free and cuts down on the numbers of cars on the roads, thereby easing both congestion and pollution. And it’s good for our health and fitness, meaning cyclists are a lighter drain on the NHS. Unless they’re hit by cars, of course.

But while cyclists have a right to use the road, we must remember that we’re sharing it too. And while Operation Close Pass sees motorists being pulled over and reminded of the rules, a fair few cyclists also need educated. I have loved seeing more bikes out since lockdown began, and with the change in the seasons some of my favourite routes around Inverness, the south Loch Ness lochs, the Black Isle, and out round Foyers, are brightening up with coloured jackets once more. Many of those cyclists, 200 at least, are part of #Cycle200 for Highland Hospice, raising money for our much-needed end-of-life care facility. I’m proud to be among their number.

But cyclists aren’t without blame 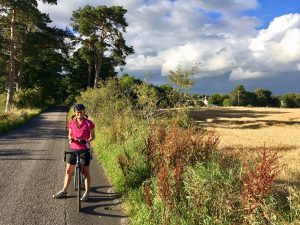 There’s not much space for drivers to pass safely on narrow roads like this near Muir of Ord. Safety requires cooperation and respect, which are often sadly lacking between motorist and cyclist.

But who ever said it was ok for a cyclist to ride on the pavement? Or to nip onto the pavement and cross at pedestrian crossings when traffic lights are against them? Who ever said it was ok to hold up traffic by cycling on the road where there’s a maintained and signposted cycle path? Or to race at full pelt over a footbridge, where there are clear ‘Cyclists Dismount’ signs in place?

Please don’t get me started on groups who fill the width of a single track road with Lycra, then fail to use passing places to allow faster traffic to pass. That’s not only intensely rude, it’s also dangerous. And it gives the rest of us a bad name. Inconsiderate behaviour by bad cyclists adds fuel to the fire of those drivers who are upset by our very existence. Cyclists need to obey the Highway Code and the vital ‘shared spaces’ rules too.

The bottom line is that many of us are ignorant of the rules; they’ve certainly changed a lot since I sat my driving test – you too, maybe? We urgently need a full-on education campaign. Police stopping ten motorists in Nairn is a great start, but it’s – sadly – just a drop in the ocean.