On Sunday evening I enjoyed a dram with my Mum. We sat in the garden after an afternoon spent waging war on the weeds and swirled the amber liquid in our glasses as we surveyed the fruits of our labour. The sun hadn’t quite gone down over our neighbour’s hedge, and as we talked I held my glass up to allow the sun to play on the surface of the liquid. As the first real sun of the spring warmed my body, the flavours of the whisky and the peace of the moment warmed me from within.

It was one of those quiet moments that good whisky was made for. Sometimes weeks can go by without a dram passing my lips, but when I do pour one, it’s always memorable. The time before Sunday was at the beginning of April. I’d not seen Mr Marr for a week or so, and we cracked open a bottle and sipped a couple of drams while we caught up. The time before that we’d been out with friends in Inverness. After beer and pizza, we went into The Malt Room and bought a couple of ‘flytes’ – wooden trays with three different malts on each, complete with tasting notes. We followed the rules, sharing the drams between us. There was much discussion and little consensus over our favourites. 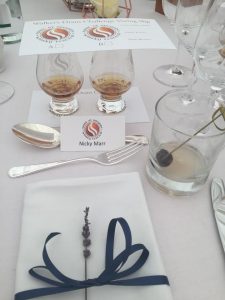 Between me writing this and you reading it I hope to have ‘drammed’ again – this time as a guest of Gordon and MacPhail, the owners of Benromach Distillery in Forres. This year, as well as celebrating the 20th anniversary since the distillery reopened, they are hosting the Opening Dinner of the Spirit of Speyside Whisky Festival. That evening will be a great opportunity to catch up with friends in gorgeous surroundings. As well as the generous hospitality on offer from our hosts there are usually a few interesting hipflasks doing the rounds.

I’ll be interested to see what the whisky industry’s take is on this week’s implementation of the minimum unit pricing for alcohol. The Scotch Whisky Association battled The Scottish Government for five years over the introduction of the minimum price, claiming it breached EU and global free trade laws. But in November last year the UK Supreme Court decided that the measure was justified on health grounds, and it came into force on 1st May.

On Monday this week, if you had put a 70cl bottle of supermarket whisky in your trolley you might have got it through the checkout for as little as £11. By Tuesday morning, with the implementation of the new price per unit of 50p, the same bottle couldn’t legally be sold for less £14. The new law will also mean an almost doubling of the cost of strong ciders and large packs of beer, and the cost of the cheapest bottles of wine will also go up.

The aim of this Scottish Government initiative is, of course, to help tackle Scotland’s problem of chronic alcohol abuse. Deaths from alcohol related illnesses have been rising year on year, and with alcohol on sale at the beginning of this week from as little as 18p per unit, it’s logical to think that an increase in price might act as a disincentive. 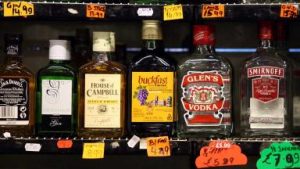 But the truth is probably less straightforward. Only the cheapest alcohol on the market will be caught by this new pricing. Research shows that the strongest beers, ciders, fortified tonic wines and cheapest spirits are bought by people who are choosing them precisely because they give the biggest hit of alcohol per buck. And if cheap and strong are the criteria, there’s usually a tricky relationship with alcohol lurking in the background. They are unlikely to be able cut down simply if their pockets are attacked. They need it and will spend whatever it costs to feed their addiction.

So I worry. I worry that the people who are most affected by this will be the children of those low-income families where one (or both) of the parents is an alcoholic. Price increases will simply leave less in the kitty to pay for food, clothes and heating bills.

This new legislation won’t affect pubs and restaurants, and it won’t affect the premium gins and whiskies that are on my shelf and that I dip into when the notion takes me. It won’t impact on which drams we’ll enjoy at the Whisky Festival either. But it will affect those who have the least and who – for whatever reason – need alcohol the most.

Saving lives is an admirable aim, but I’m not sure this new law is the answer.

This column first appeared in Seven Days, published by SPP and issued with The Inverness Courier, The Northern Scot and four other titles across the north of Scotland, week ended 4th May 2018.