Which means she didn’t ‘hop’ on a plane at all. Rona is in a wheelchair and her trip wasn’t a holiday. Rona and her husband Mick travelled to Mexico for a month for Rona to undergo pioneering stem-cell therapy in the hope of halting the progression of the crippling disease.

Autologous Haematopoietic Stem Cell Transplantation (AHSCT) is no walk in the park. It’s a gruelling treatment which kicks off with the painful harvesting of stem cells from the patient’s bone marrow. Once the stem cells are recovered and stored, the patient’s MS-ridden immune system is wiped out using several rounds of high-dose chemotherapy. The harvested cells are then returned to the body, hopefully ‘re-booting’ the faulty immune system in the process. And then – fingers crossed – recovery can start; recovery from the surgery and chemotherapy, that is, not necessarily recovery from the symptoms of MS.

Because there are no guarantees with this procedure. In fact there are serious risks. A month before Rona travelled to Mexico an MS patient died of sepsis in the final stages of the same treatment, although fatalities are rare. Zapping the immune system is a necessary part of the treatment, but puts patients at risk of infection, so Rona will have to be tremendously careful over the next few months to remain free of infection as her body rebuilds. 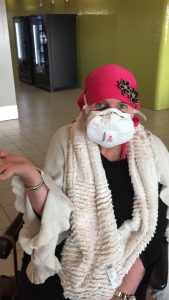 A masked Rona travelling home from Mexico to Inverness via Schiphol Airport, Amsterdam

Armies of friends scrubbed and disinfected Rona’s already clean house prior to her return, and visitors are restricted to close family and friends. While donations of cake and baking are welcome the rules state that salads and soft fruits are off the menu, as are unpasteurised foods and raw meat.

Right now the overall picture is looking pretty good. Although still exhausted and confined to bed, Rona is experiencing positive results from her treatment. Within days of her stem cells being returned to her body she began to feel warmth down the left side of her body for the first time in years.  It may not mean much to you or me to occasionally be able to wiggle our toes, but to Rona that’s a massive progression.  And to be able to unclench a hand that has been fist-like for months, and to squeeze her husband’s hand in her own…well, that must have been a very special moment.

What is the prognosis? It’s hard to say. Some patients who have undergone the same treatment as Rona have reported little or no improvement in their symptoms, but been delighted that the progression of their MS has been halted. Others have been able to walk again, either unaided or with a stick. One or two – admittedly less disabled than Rona was before she travelled to Mexico – report they are practically symptom free.

It’s also hard to know when Rona might feel the benefits; sometimes recovery is almost immediate, for others it takes months, even up to two years. Rona is celebrating every positive sign. 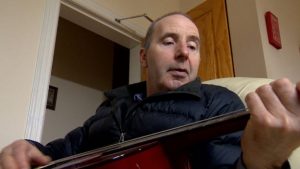 Visiting Mexico to undergo stem-cell therapy wasn’t something Rona had considered for herself until this spring, when she contacted fellow Inverness MS patient Colin Campbell after seeing his story in the news. Colin had planned to travel to Switzerland this June to complete his life by self-administered lethal infusion at the LifeCircle Clinic. Rona befriended Colin and persuaded him that a life with MS was still a life worth living. Thanks to Rona, Colin is now happily settled in assisted accommodation in Greenock, although, as he says, his Switzerland plans are only ‘on hold’. The pair are still in close contact.

By way of thanks Colin gave Rona the file of his research into stem-cell therapy. That sparked an interest in Rona, and she and Mick started their own months of research. It seemed a risk worth taking. The total cost of £60,000 for travel, treatment and hospital and hotel accommodation in Mexico was crowd-funded by family, friends, well-wishers and local businesses. But that’s not how Rona would like it to be.

Just as Colin feels that he and other terminal patients should have the right to die in Scotland, rather than having to travel abroad, so Rona feels that MS patients should be entitled to receive stem cell treatment in Scotland. Trials are available in England to a very select number of NHS patients, but none from Scotland has been put forward.

Rona is a formidable woman – fiercely intelligent, relentlessly determined, and with a passion to help others to get the treatment she has had, only closer to home and without having to shake a bucket to raise the money to do so.

Less than a fortnight home, and she has been giving TV and radio interviews from her bedside, rallying for support for her cause. If that’s what Rona can do while she’s still in pain and having to nap between taking and making calls, once she gets her strength back, NHS Scotland had better watch out!