Well, that’s Valentine’s Day over for another year.

As I sped round Tesco on Sunday evening, staff were packing away boxes of chocolates to make way for Easter eggs, and marking down leftover Valentine’s cards to 25p. I was almost tempted to buy one (two?) for next year, but I resisted. It had been a tiring day already, and dinner wasn’t going to cook itself.

I’ve always been slightly suspicious of Valentine’s Day, and that’s from a position of being long-term happily married. Each to their own, but I don’t take kindly to being marketed at and strong-armed into romantic gestures, just because the calendar dictates it. If you’re unhappily single, you have my sympathies. It’s not that I have anything against love or romance, but I have my own idea of what counts as romantic, and a heart-shaped sausage, or a dine-in deal doesn’t count, however good value it might be with Prosecco included.

Romantic gestures mean so much more when they’re spontaneous. A bunch of flowers delivered ‘just because’, means I know he was genuinely thinking of me. And although I love eating out, I’m often happier with chips on the beach, than in a restaurant where we have to rush because the table is booked out again at 8.30pm.

Flattering and comfortable. The elusive twin desirables of new underwear.

Having said all that, I absolutely loved Mr Marr’s home-made Valentine’s card and the gift of underwear. It’s flattering, and it’s comfortable. With bras it’s often either, or…

On Valentine’s Day we spent the whole day together, just the two of us. After a breakfast of poached eggs on muffins, we set to work. Carefully clad in old clothes and rubber gloves we removed a kitchen cupboard and – for the first time in 23 years – we moved the cooker. The dust and dirt and the congealed mess of decades of fallen food, was, quite frankly, horrific. Even our full arsenal of scourers and vinegar was no match for the debris. We resorted to the big gun, the steam cleaner. It took hours. And when we eventually slid the cooker back into place, there wasn’t a shred of evidence of our hard work. 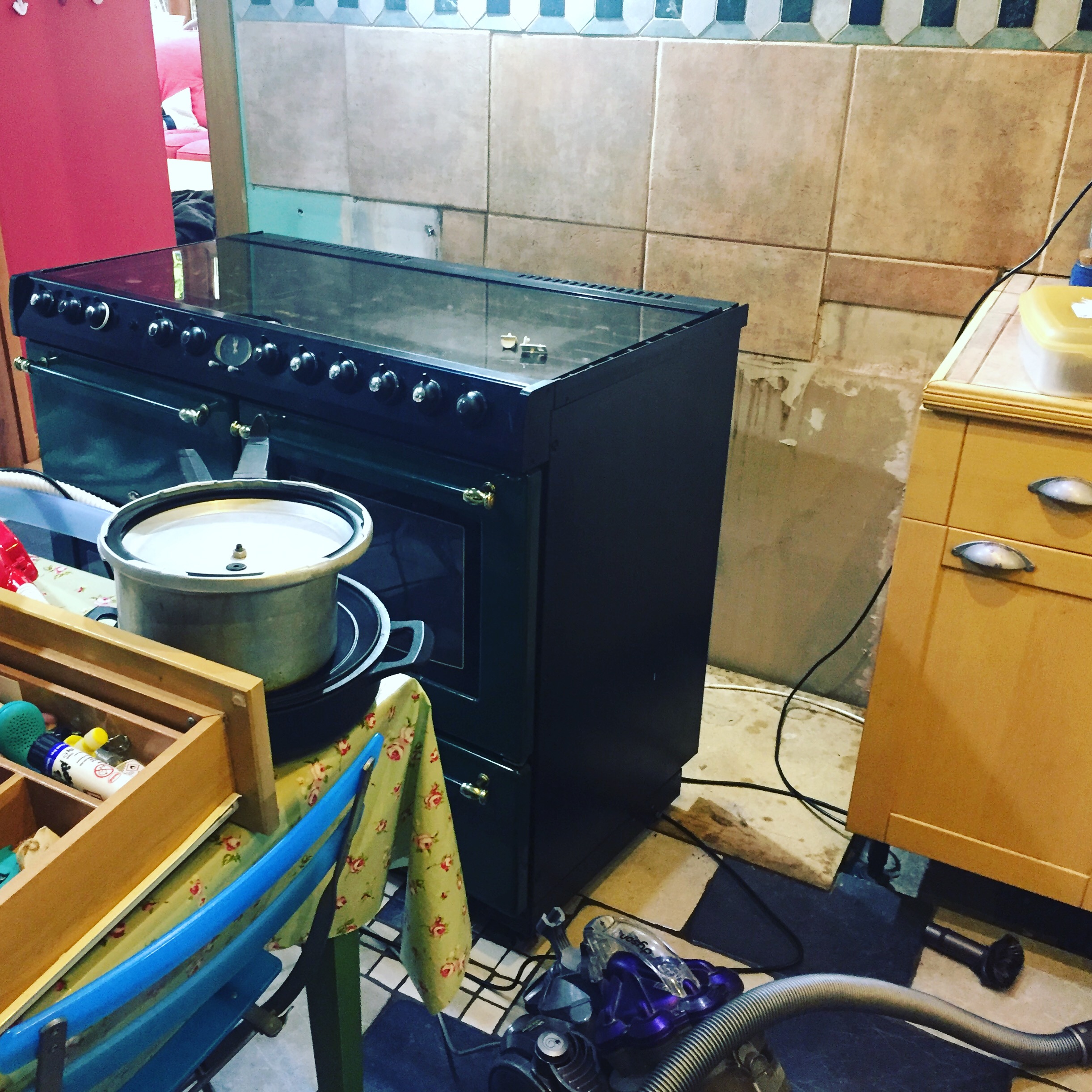 Valentine’s Day, Marr Style. It doesn’t get any more romantic than this.

Scrubbing with a purpose

But there was some purpose to our ‘romantic’ day of scrubbing. That cooker, bought before Daughter #2 was born, is to be replaced next week. We needed to get it out to clear a space for the new one to be installed. I’ll be devastated to see it go.

It’s 23 years ago this week since we moved into this house, and our kitchen – not the house’s kitchen at the time – was built around that cooker. We couldn’t afford it, but I sold my car to pay for it.

It’s racing green enamel, with six burners and a hot plate, three ovens and a grill. It was, and still is, handsome, strong and sturdy, and looks as good as the day it arrived; the enamel still shining, the gold knobs still glowing.

23 years ago, Mr Marr and I worked together to build our kitchen from scratch. We butted kitchen cabinets up to each side of the cooker (though not close enough to stop crumbs escaping, evidently) and tiled behind it to protect the wall. Heavily pregnant, I struggled to reach across the work surface to finish the grouting. Within 24 hours of the cooker being connected, Daughter #2 arrived.

But it hasn’t just been a cooker…

But, good as the old cooker still looks, its ovens don’t reach temperature any more, and a couple of the rings have stopped working. Parts are unobtainable and it has been repaired for the last time. We’re replacing it with the same brand. Next week’s new cooker – costing half the price of the original, even including delivery to the Highlands – has a lot to live up to.

Because it hasn’t just been a cooker – it has been the heart of our home. It has cooked elaborate dinners and simple lunches, baked birthday cakes and lockdown sourdough, roasted turkeys, roasted casseroles, catered parties, boiled kettles, fried bacon and boiled up more pans of soup than I’ll ever remember peeling veg for. It has simmered stocks and jams, caramelised apples for tarts, and been the source of both surprising successes and unmitigated disasters.

It’s just a cooker, but it’s a key part of our family’s memories. On Valentine’s Day Mr Marr and I worked together to give it a final clean and polish – a thank-you before it is crushed for scrap. And that’s one of the most romantic ways we could have spent our day.

This is published by Highland News and Media in six of their newspapers across the north of Scotland. If you can, please support print media and the future of independent  journalism by buying a paper!

If you’d like to receive my mutterings in your email inbox every week, why not subscribe? It’s completely free, with no spam, ads or other undesirables. All I need is your email address, which I’ll never share.

Constructive feedback and comments are welcome, as are your stories and ideas for future pieces. Stay safe and well.