Scottish Election – who’ll get my vote on the Regional List?

If you look at the polling history for my home constituency of Inverness and Nairn, it’s fairly clear which of the six constituency candidates will be returned. Fergus Ewing is a member of the Ewing Dynasty (not the ones from Southfork in the 80s) and has represented me and my neighbours in Holyrood since 1999. Ewing won over 48% of the vote in 2016, with his nearest rival at 20%. Of course, a shock swing could take the rug from under his feet, but he seems on pretty solid ground.

Ewing has a strong reputation for working hard for us, and his ministerial portfolios have covered energy, tourism and the rural economy, all sectors which are of vital importance to the area. Anecdotally, his work as chair of the steering committee for the transformation of Inverness Castle has been spot on, and helped drive it towards its current ambitious position. I suspect he’ll still be in post as MSP to enjoy a glass or two when the new castle facilities open.

More intriguing, is who to vote for on the list…

The lilac slip of paper decides our constituency MSPs and looks like being a foregone conclusion. More intriguing, then, is who to vote for on the peach ballot paper, the one which elects Highland Regional List MSPs.

Of the 17 parties and individuals on that regional list, seven will be elected to represent the whole of the Highlands and Islands. The list includes a few entertaining wild cards. As promised, I have kept all the leaflets that have so far come through the door. Some of these serve as an eyewatering reminder that Scotland is a true democracy, where all opinions are tolerated, and freedom of speech is celebrated.

So where will my second vote go? Historically it’s always gone to the Greens. John Finnie, standing down this term, is a man whose integrity and intellect I greatly admire. My Green sensibilities haven’t dwindled in the last five years, in fact throughout this pandemic, and with my closer associations to the renewable energy sectors, they have strengthened. But then there’s the issue of Andy Wightman, who is standing as an Independent candidate. And the more I look into him, the more I believe that he has earned my vote. 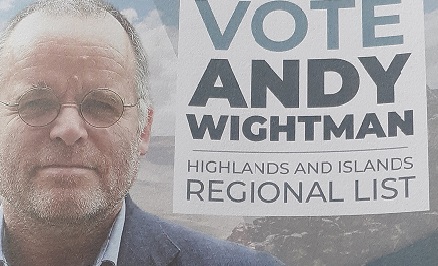 Wightman was first elected as a Green List MSP in 2016, although left the party shortly before Christmas. He continued as an Independent MSP and played a crucial role in the recent cross-party Salmond Inquiry.

But I knew his name from before his political career. Andy Wightman has long been a researcher, writer, and campaigner on land reform. He has worked with Highland communities since the 1990s, supporting them to achieve more local control of land and resources, and calls for a ‘Land for the People’ Bill in his manifesto.

Policies that seek fairer tenancy agreements and back the wee guy over an absent landowner are always going to tick my boxes. And with so much whip cracking from the big parties, aren’t the independents the only ones who can represent the best interests of their constituents with true integrity? 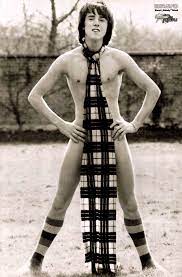 Not my exact poster, but this one of Woody from Bravo magazine gives you a flavour…!!!

When the Bay City Rollers first topped the charts, I was in Primary 4 and far too young to be swept up by Rollermania. But I didn’t let that deter me and became the proud owner of knee-high Bay City Roller socks and a tartan schoolbag. Bye Bye Baby was my favourite, and I remember being furious when mum made me take down a poster from my bedroom wall.

Thinking back on it now, I’m not surprised. The band were all naked, with nothing but floor-length tartan scarves covering their modesty. My friend Andrew’s big sister Fiona had ripped it from the centre of Jackie magazine for me, knowing I was a fan. I wonder if mum ever realised that I snuck it back out of the bin later and hid it under my mattress?

Thanks for the memories, Les, and the songs. And for being my first popstar crush.

As Scotland reopens there are gaps on our High Streets. Lockdown and our increased reliance on online shopping have sounded the death knell for many retailers, from giants to independents. Serious efforts will be needed to keep our towns and cities vibrant and attractive places to be. But as cafes and bars tentatively reopen, there’s a new addition to the Inverness scene.

Look out this weekend for the soft-opening of new wine bar The Walrus and The Corkscrew, at the Miele’s end of Church Street. Carefully chosen wines, great coffees and sharing platters will help catch-up conversation flow. See you there?