More used to the high-adrenaline sports of skiing and road biking, I wasn’t sure how I would take to a few days of life pootling along at walking pace. But this summer, with a weekend’s worth of groceries neatly stowed, a bottle of Prosecco chilling in the fridge and the prospect of a pub supper a couple of hours down-stream, within minutes of setting out in a cruiser on the Norfolk Broads, I was hooked.

Getting to grips with slowing down: at the helm at Hansett in the North Norfolk BroadsThere is no denying it. When travelling at a maximum of 6mph, life becomes less about the destination and more about the journey. On the Norfolk Broads the maximum speed limit is 6mph but more commonly 4 or 5. As a result, everything slows down when you’re on board a cruiser. And with so many things to catch the eye as you pootle along – thatched cottages, pretty villages, other boats, and wildlife, plus the trees, water lilies, reed beds and flowers on the riverbank, if you were travelling any faster, you’d be bound to miss something.

Adam the engineer demonstrated the boat’s workings to us before taking us out onto the river for a quick (and easy) driving lesson. The rule, he explained, was never to go fast enough to create a bow wave. So we took it easy, and we were proudly the slowest boat on the water all weekend.

‘Carl with a C’ picked us up from Norwich International Airport after a Loganair flight from Edinburgh that took little over an hour. En route to the boat yard in Potter Heigham in the North Norfolk Broads he gave us his take on boating, Broads style.

Split into north and south, with the seaside town of Great Yarmouth as the border between the two “the north is for pubs and the south is for nature watching and wildlife,” Carl explained. On our three-night hire we’d be well advised to stick to the north, so he made me write down a list of his favourite riverside pubs… and the ones to avoid. (But don’t be fooled – we saw wildlife galore!)

Carl drove us past Roys of Wroxham, the self-proclaimed ‘largest village shop in the world’, past the RAF Museum in Horning, and slowed down to show us his favourite fish and chip shop. And he told us to pick up the free Broads magazine ‘The Broadcaster’. Published by The Broads Authority it contained everything we needed to know about Broads wildlife and attractions, and about the practical stuff: where to moor, where to fill our water tanks and which low bridges we’d need to avoid as our cruiser – sitting 8 feet proud of the water line – wouldn’t be able to pass underneath. 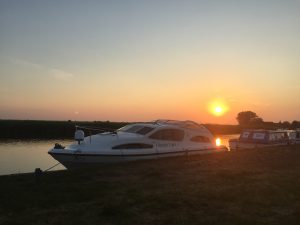 So, what was the boat like? Think sleek caravan, but infinitely more luxurious. The choice of cruisers for hire from a myriad of different companies is almost overwhelming – ours from Herbert Woods (Carl gave them an unequivocal thumbs-up) had options for steering both from the deck (great in the sun) or from inside the cabin (useful in case of rain). With two bathrooms, two double bedrooms and a living room with a seating area that could be converted into another double bed, it could sleep seven, so was spectacularly comfortable for four.

The well-supplied galley kitchen had everything we needed and more – we cooked and ate breakfasts and lunches on board and had our evening meals in Carl’s recommended waterside pubs. There was a fridge with a freezer compartment, TVs in each room (switched on for just the 90 minutes of one World Cup match) and – blissfully – no Wi-Fi. If anything, lack of connectivity helped to slow the pace of life down even further.

To be honest I’d been worried about our boating weekend. How would we drive the thing? How would we know where to go? What would we do about mooring or filling up with fuel? And would the on-board showers (and loos!) be any good? 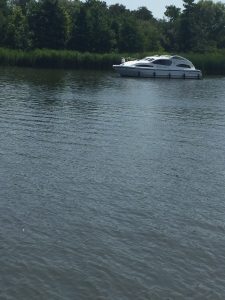 My fears (as is often the case) were completely unfounded. The cruiser was remarkably easy to manoeuvre – even to reverse ‘stern-on’ into tight moorings. A combination of everything happening at snail’s pace and useful bow, stern and side-thrusters, meant that it could be guided into position with minimal effort. And even if you did gently drift into a neighbouring boat, no real damage was done. The boats are sturdy, and each is ringed with a rubber bumper and festooned with fenders; the inevitability of light collisions has been built into their design. And there are always plenty of people onshore to offer advice – much of it contradictory, but there’s no sneering. We are, after all, pretty much in the same boat…

At some busy moorings there were staff to help us tie up, and outside the busiest of pubs they would help us ‘double-up’ by mooring us alongside another boat. Did I mention everyone on the Broads was unfailingly friendly? The first time we had to cross another boat to reach the quayside seemed strangely intrusive, but it’s a way of life on the Broads. A quick chat about where we’d been that day and what time we’d be casting off in the morning was all that was required.

There’s time… even to change your mind

Never having cruised before, I had felt under-prepared. But with the pace of life being so slow there is time to work things out. There’s time to practice driving and reversing. There’s time to discuss, once you are underway, where you might head for the day. There’s time to change your mind about those plans, for example if you pass moorings at a nature reserve or a restored windmill and fancy a walk. Or if you pass a shop and fancy an ice-cream…

And sometimes you don’t even need to find a mooring in order to stop – in the wider Broads (is that why they are called ‘Broads?’) you can throw down the aptly named mud-anchor, and just bob around for a while, enjoying the breeze, watching the other boats, or feeding the swans, geese, ducks and herons that gather whenever they see a fresh loaf of bread being cracked open. 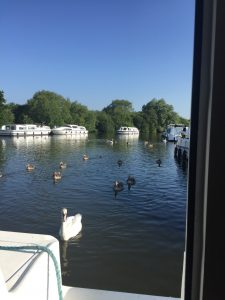 If you’ve not considered a holiday on the Broads, maybe now’s the time. After all, with our direct flights into Norwich, they have never been more accessible. And believe me, you won’t regret it.

Our long weekend on the Broads

Day 1. Our boat was ready from 2.30. We were given life-jackets and loaded our belongings on board. Engineer Adam explained the workings of the boat, sorted our paperwork and talked us through the map, suggesting places to stop. On the river he demonstrated the boat’s basic manoeuvres. Once he could see we were getting the hang of it, we were off. 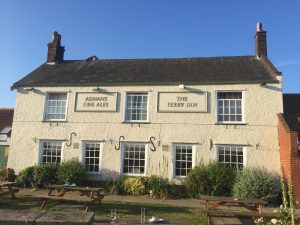 The Ferry Inn at Stokesby

From Potter Heigham we pootled south on the River Thurne. Hickling Broad National Nature Reserve was out of bounds because of the low bridge. We passed the mouth of the River Ant – signposted as a road would be. It was tempting to moor at the pretty, thatched Bridge Inn at Acle, but carried on to The Ferry Inn at Stokesby. We had been travelling for over three hours but had covered just four miles. Time for a drink, dinner and an early night.

Signs at Stokesby Moorings suggested someone would be around to collect the mooring fee of £5, but they didn’t appear. After breakfast, with an audience of assorted water-fowl, we carried on south.

Day 2: Saturday’s destination was Great Yarmouth, two hours away. Mooring at the Yacht Club (£6) we walked into town (visit The Fisherman’s Hospital, dating from 1702) then made for the promenade. Here the tourists’ focus wasn’t the miles of sandy/shingle beach or the sea, but the amusements – inflatable castles, a Sealife Centre, pier entertainment, slot machines and fast food. After a quick paddle we headed back to the cruiser.

Lunch was on deck as we motored north – the lower River Bure is shallow at its edges with no safe moorings, making this a relatively featureless section. 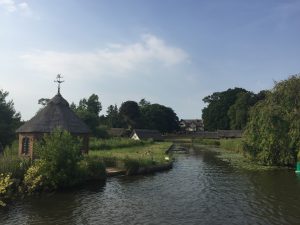 Horning was much prettier

We turned left into the Upper Bure on our way towards Horning. This was much prettier – thatched houses with boathouses and drainage mills galore. Many are holiday lets; most had someone fishing from the riverbank. We didn’t see anyone catch a thing, but that’s maybe not the point of fishing…

Horning was busy, with double-mooring and Saturday night party boats. The Ferry Inn was fun and buzzing, and geese, swans and herons were waiting for scraps. It had been another tiring day. We didn’t even play cards before bed…

Day 3: Sunday was an early start – we slipped our moorings before our neighbours were awake and headed off at 8am to explore the River Ant. We had already negotiated the low bridge and re-filled with water at Ludham Bridge and were mooring alongside at the beautiful How Hill House by 10.30. 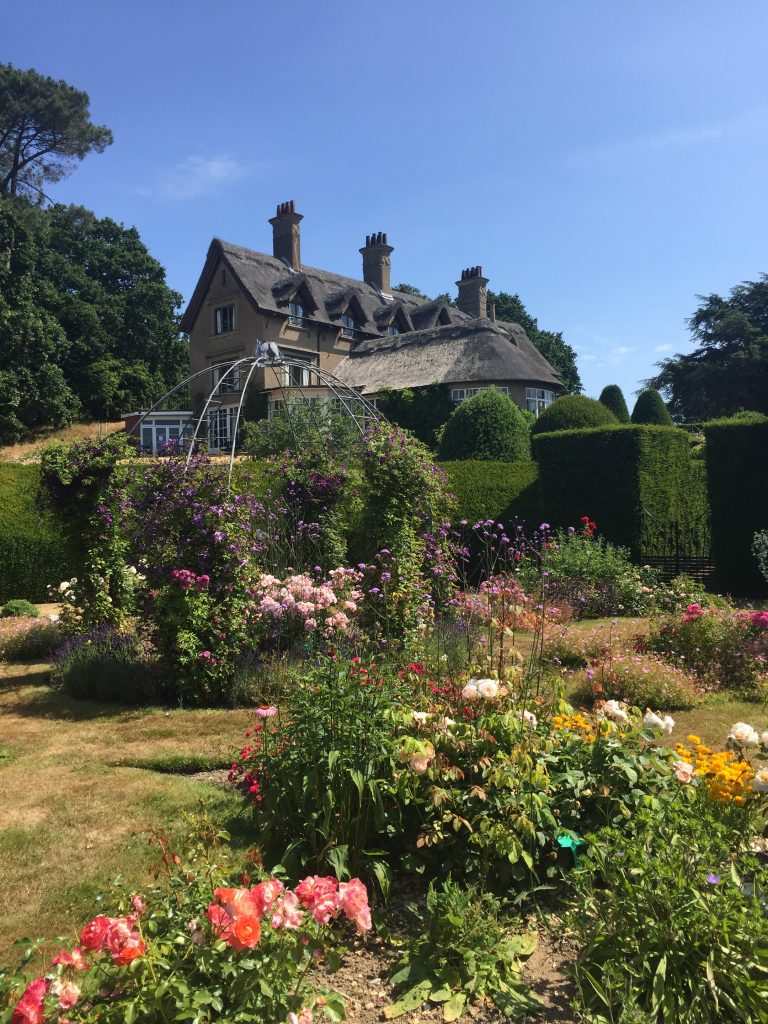 The Beautiful How Hill House

How Hill is a thatched arts and crafts house, now used by school groups, with wonderful gardens and a tearoom. Toad Hole Cottage Museum, a restored eel fisherman’s house, is nearby. 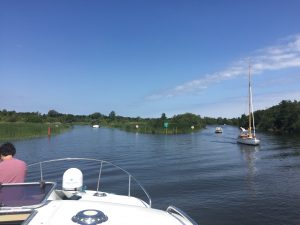 A junction at the north of Barton Broads

Just north of Irstead we hit our first real ‘broad’ Broad, Barton Broad. The breeze here was welcome after the shelter of the narrows, and we were tempted to drop our mud anchor and just sway in the wind. But Wayford Bridge was calling. The river to here was narrower with trees providing dappled shade. Day-hire boats moored by the banks while families picnicked, fished and snoozed.

The mill and house at Hunsett were beautiful – do they ever tire of passers-by on the water, I wondered? Returning to Barton Broad we sank down our mud-anchor and ate lunch, watching dinghy sailors and kayakers at play.

Planning dinner in the King’s Arms in Ludham we headed for the peaceful moorings at Womack Staithe. This would mean just an hour’s travelling before returning our cruiser to the boat yard at Potter Heigham the next morning.

Dos and Don’ts for Cruising The Norfolk Broads.

I spent a long weekend on board an Olympic Light Elite Cruiser, courtesy of Herbert Woods Broads Holiday Adventures, based in Potter Heigham in the Northern Broads. They have a wide range of cruisers for hire with 2-9 berths, plus day and picnic boats. Prices start from £322 for a short break. Loganair flies to Norwich International Airport from Aberdeen, Edinburgh and Manchester.

This piece first appeared in FlightLOG, the in-flight magazine for Loganair, SCotland;s Airline, on 1st September 2018.