I am not sure that I have ever been more disillusioned by Westminster politics. The deepening and destructive Downing Street farce of a woman who didn’t want Brexit having to ask for help to leave Europe from an opposition leader who has no stomach for it, would have been a stretch even for the scriptwriters of ‘Yes Minister’. Theresa May’s resignation and the glee, greed and self-serving opportunism in the eyes of those Tories now battling it out to become the next unelected Prime Minister of our country, is enough to make me embarrassed to travel abroad. What must the rest of the world think of us?

Thankfully, the European Election results, as we watched them unfold in the early hours of Monday morning, began to tell a different – and truer – story of Scotland. With overwhelming support for the SNP and the Greens, Scotland is clearly a country of Europe. In stark contrast, Nigel Farage’s Brexit Party succeeded south of the border, and with his face dominating the national news (from London) on Monday morning, the very different picture in Scotland was barely mentioned.

This marriage is over

Let’s face it, this marriage is over. We’ve had some fun over the years, but it’s time to accept that, for a myriad of complicated reasons, we have grown apart. It’s time to split our assets, work out custody and access to the kids, and start rebuilding our lives – separately. As with all break-ups, there will be sadness and regret. There will be things that it will be tough to admit that we couldn’t fix. But it’s over.

It would serve us well if we could act like grown-ups and – hopefully – remain friends after our divorce. There will be inevitable hurt on both sides, but if we focus more on the future and less on the past, and can resist throwing insults, raking up old arguments and blaming each other for what went wrong, then we will get through this.

Ours has never been a marriage of equals

Except that ours has never been a marriage of equals. Scotland cannot simply decide to pack a bag and walk away, because Westminster holds all the strings. Westminster is refusing to allow us to hold the second referendum which would give us the space – as a country – to decide what we really want to do. In a marriage this would be classed as coercive control and Westminster would be up in court on criminal charges. 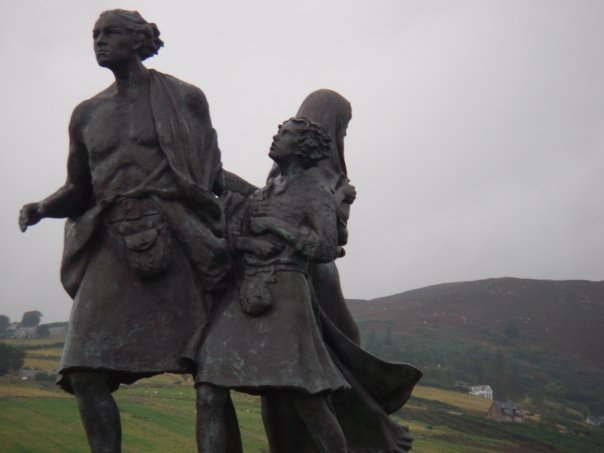 It wasn’t a marriage of equals in the eighteenth century either when the (English) Duke of Sutherland brutally cleared Highlanders from their crofts to make way for more profitable sheep. It wasn’t a marriage of equals when Tory governments of the 70s and 80s ripped the heart out of our shipping and mining communities and trialled the ill-fated Poll Tax on us. We are still treated as guinea pigs, with disadvantaged Highlanders plunged even further into poverty with the imposition of the disastrous Universal Credit system.

I’m not saying the SNP and Greens are perfect – far from it. But I do believe – now more than ever – that Scotland deserves the right to determine her own destiny. In September 2014 I voted for Scottish Independence, having sat firmly on the fence through most of the debates. My decision to vote ‘yes’ then was not based on negativity, or on the rejection of Westminster or England, but as a positive affirmation of the good work of the Scottish Parliament during its first 15 years, particularly in devolved areas of health and education, where we were faring better than they were south of the border.

We can’t allow apathy to take us out of Europe

Since the Brexit vote, so much of the energies of both Westminster and Holyrood have gone into debating the rights and wrongs, pros and cons of each ‘Deal or no Deal’ that the business of running the UK – and Scotland – for the people, and not for the elite, has been all but forgotten. There is voter fatigue, and people are sick of elections and talk of referenda, but just because it’s hard to keep fighting for what’s right, doesn’t mean that it’s not worth fighting for.

I don’t want apathy to allow Westminster to take Scotland – which has again voted overwhelmingly to remain in Europe – out of the EU. I don’t want Scotland to be governed by Tories anymore. But by the same token, I’m not sure I want to be governed by the SNP. But the great thing about Scotland gaining independence is that we would then have elections to decide who was in charge – surely self-determination is better than the current option of Boris or Gove or Rabb and the rest of them?

Yes, there’s lots to think about – including our future membership of the EU and how we police what will become a Scottish-English EU customs border if Westminster do get Brexit through. But it’s high time for us to stand up for ourselves. The time for coercive control is long gone. Scotland needs a second independence referendum.