Something is missing. Integrity.

As I write (and forgive me, I file this column around a week before you get to read it) the news headlines are sickening. And it strikes me that from all the headlines – those about Downing Street parties, Prince Andrew (no HRH required) and Novak Djokovic – there’s something missing. It’s integrity.

Integrity is defined as the quality of being honest, with strong moral principles. In practice, it’s about doing the right thing for the right reasons. Not pushing the boundaries of decency, not doing whatever you fancy because you think you can get away with it, and not assuming you’re deserving of better or special treatment, just because you’re in a position of power.

They’ve made fools of us. They’re laughing, too.

Those working in Downing Street, with their lockdown parties and cover-ups, have made fools of the rest of us, those of us who obeyed the rules, shortened our horizons to live smaller lives, made sacrifices, missed loved ones, and clapped for the NHS on Thursday nights.

More than that, they are laughing at us. Allegra Stratton sniggering at how to respond to journalists’ questions about parties, Boris Johnston unable to keep a straight face when questioned about the garden party on the 20th of May, and a staff member sneaking out with a suitcase to buy more wine the night before Prince Phillip’s funeral.

They all did wrong, and they knew they were doing wrong. They thought they were a cut above, the rules, then flagrantly disregarded them. I am appalled. Sadly, I’m not surprised.

Strip Andrew of his title Earl of Inverness

Prince Andrew? Don’t start me. I’m wondering if, by the time you read this, The Provost of Inverness will have asked The Queen to remove the title of Earl of Inverness from her youngest son, just as The Queen has removed his military affiliations, royal patronages, and HRH title.

I know, innocent until proven guilty. And of course, Virginia Giuffre’s case is a civil claim for damages and not a criminal trial. But The Queen stripping Andrew of titles and royal responsibilities, combined with his own bizarre actions and excuses, speak volumes. Of course, he denies any wrongdoing. But where is his humility? His integrity? Presumably under a table in a Pizza Express in Woking.

And tennis star Djokovic? He is perfectly entitled not to be vaccinated, but in making that choice, he must accept the consequences. But who did he think he was, posing for photographs with children the day after testing positive? Where was his integrity then? Did he assume we wouldn’t find out?

We’ve all cut corners, pushed boundaries, and got away with it. We’ve all done things we regret and wish we could take back. But most of us own our mistakes and do what we can to put them right. We don’t spend our lives wondering how much we can get away with, then acting surprised – and outraged – when we are caught out.

What’s the Wordle on the Streets? 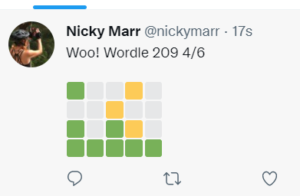 Have you been bitten by the Wordle bug yet? Just three months after Welsh software engineer Josh Wardle invented the word game for his partner to play, it now has more than 2 million daily users worldwide. And Mr Marr and I are two of them.

The aim is to guess a five-letter word in just six goes. If you guess correctly, the letter changes colour, indicating whether it’s in the right place. It reminds me a little of the board-game version of Mastermind we played when I was a kid.

Wordle is free and ad-free, just Google ‘Wordle’ to find it. But its real beauty? You can only play once a day, so no matter how addicted you get, it won’t steal your time.

But beware! Although Welsh, Josh lives in Brooklyn. Was anyone else stymied by the American spelling of ‘favour’ last week?

DVLA – Asleep at the wheel?

Is your driving license still valid? Weeks after being pulled over by police for an expired MOT, Mr Marr and I tripped up again – or at least he did. By chance, he realised his driving licence expired last summer. No, he’s not 70 – that’s a while off yet. But photo licenses must be renewed every 10 years.

He’s sorted it now, avoiding a fine of up to £1000. But while the DVLA website clearly confirms a reminder will be sent, nothing arrived. Nada.

Is the DVLA asleep at the wheel? Or is someone eating our mail? Either way, best check yours.

Thanks for reading and subscribing.

If you’d like to share this with a friend or colleague, just ask them to add their email to the wee widget on the left hand side of my home page, or get them to email me nicky@nickymarr.co.uk and I’ll do the rest.
Thanks!