A few weeks ago, I resolved to reduce my reliance on single-use plastic. It was pointed out to me what a relatively new thing our dependence on plastic is. Going back to paper bags for fruit and veg, and cotton dish cloths instead of plastic sponges, is reverting to what our grandparents naturally did. Ours aren’t new ideas; they are the way it should always have been. 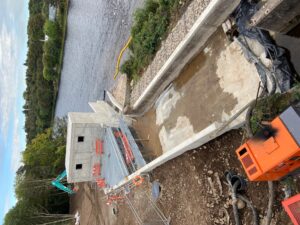 That notion of old ideas being new came to mind again last week, standing on a bridge across the River Ness, looking down at the site where an Archimedes Screw hydro scheme is being constructed. Directly across the river from us was Holm Mills, the woollen mill itself formerly powered by the river.

As Martin MacDonald, Project Manager for Highland Council’s Transformational Team explained to me, ‘Old tech and old infrastructure are being used to deal with a modern problem”. The old tech is the eternal power of flowing water. The old infrastructure is a long-defunct hydro scheme which is being given new life. The modern problem is ever-increasing fuel bills – don’t we know it! And the beneficiaries will Highland Council Tax payers. The Archimedes Screw will power Inverness Leisure; a green solution to ever-rising fuel costs.

I’d been invited by Martin and his Council colleague, Climate Change Coordinator Katie Andrews, to get a better understanding of what the River Ness Hydro project is all about, and what it will leave the city with, once the project is completed early next March.

Although still a building site, it’s already taking shape. River water will flow into a laide channel, through sluice gates, and into a chamber, which, from November, will house the screw. The force of the water will turn the screw before flowing back into the river. The turning screw will generate around half the electricity needed by the leisure centre. Brilliant!

SEPA have – crucially – given the project their blessing. The structure will include a fish ladder, with an opportunity to count and monitor the fish using it. And, perhaps most importantly, there will be a free-entry visitor centre, allowing locals and visitors, school pupils and students, to better understand the tech behind the clean energy produced.

A self-guided walk with interactive interpretation will tell the story of the hydro scheme and – hopefully – encourage greater enthusiasm for renewables. Young imaginations are already being fired, with STEM-influenced learning activities and a schools competition to name this new space for the city.

Room for more? Not really…

Micro hydro schemes and community turbines are popping up all over the north, in addition to the huge wind and solar farms across our environment. The opportunities for additional small-scale renewable projects are currently limited though, thanks to grid restrictions imposed by SSEN – a concern Highland Council have already raised with The Scottish Government.

Martin will be talking more about the project at Highland Council’s upcoming online Climate Change Conference on 21st and 22nd October. Be sure to tune in.

Clean energy. What’s not to love? 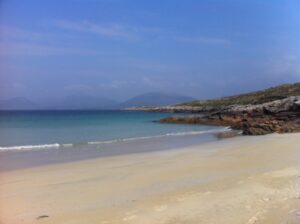 Luskentyre beach from our last visit in 2017.

As you read this I’ll be in the Outer Hebrides. We’re staying near to Harris’s glorious Luskentyre beach, and – if the weather and sea conditions are favourable – plan to kayak over to the uninhabited island of Taransay. There’s a romance, and a sadness, to deserted places. I’ll report back.

Meantime, have a listen to the engaging podcast series, FarNorth, especially to episode six, ‘Abandoned Islands.’ It features John Manson, now a Scrabster resident. As a boy his family was the last to live on the island of Stroma, the only one of Scotland’s 900 islands that belongs to Caithness.

While we’ll be careful on our paddle to Taransay, I wouldn’t dare attempt a similar trip to Stroma. With John’s tales of fantastically fast tidal currents, shipwrecks, dangerous whirlpools and ‘mountainous seas’, I’ll stick to seeing it from the Orkney ferry.

A little help from Morrisons

There’s often a gap between what I intend to do and what actually happens, but Morrisons supermarket in Inverness has made one of my ‘meant to’ moments easier.

They make up paper sacs full of groceries, baby products and toiletries, each containing items needed by the local foodbank. You pop one in your trolley, get it rung through as part of your shop, and leave it for the foodbank on your way out. Except that I keep forgetting to grab a bag.

Some genius has moved them to the ‘impulse buy shelf’ at each checkout. Bag grabbed, job done. Just the nudge I needed.

Please help spread the word by sharing this with your friends/family. Thanks!