Scotrail come in for a lot of criticism, especially here in the north of Scotland. Some of it is justified, some less so. With my ‘Old Lady Railcard’ (I think the official term is Club 50) I get fantastic discounts. Between January and the end of March it has been just £17 for a return journey anywhere in Scotland, and those prices are hard to resist.

When the trains are running well there is no better way to travel, especially when you get the ‘holy trinity’ of first world desirables; Wi-Fi, a socket for your laptop and a trolley service for tea and shortbread. Heading south from Inverness to Edinburgh, the views through the Cairngorms National Park are breath-taking. And as the train slides round the Fife coast towards the Forth Bridges, I am always pleasantly surprised by the beauty of the beaches.

Most journeys are fairly unremarkable, but my last trip to Edinburgh, a couple of Friday afternoons ago, will stay with me for all the wrong – and also all the right – reasons.

I’d planned to work all the way to Edinburgh, but a lack of power sockets meant my laptop battery died just as we were drawing into Perth station. It didn’t matter, it was Friday afternoon, and my emails could wait. There was the usual changeover and rearranging of of passengers. I put my work away and switched my headphones on to settle into my audiobook.

Seasoned travellers get a sense of what feels right. A few minutes after we left Perth, there was a collective exchange of glances around the carriage as the brakes squealed. We weren’t near a station – all around us were sodden fields. Then… nothing. We sat, exchanged more glances, and waited for an announcement. Finally, one came: For ‘operational reasons’ we would be there for some time. Collectively, we reached for our phones to complain that we’d been delayed. There were grumbles, and speculation. Had the driver had a heart attack?

Someone noticed blue flashing lights in the distance. I found a Tweet from Scotrail that confirmed our worst suspicions – our train had hit a person on the track. Suddenly, our arrival time in Edinburgh was irrelevant.

Exemplary communication from a shaken staff

Scotrail’s crew were truly magnificent. The guard, upset but composed, was making his way through the train talking to us in small groups. He explained that the driver was completely devastated; the braking distance of a train travelling at speed is a mile and a quarter and of course there is no option to swerve. There was nothing that could humanly have been done to avoid the collision. The entire crew was being replaced by a relief crew who were on their way from Perth.

And just like that, with the reality of the situation explained, the atmosphere changed. We weren’t just individuals in a train anymore; we started talking to each other, making small, human connections. More phone calls were made, but in place of annoyance was sadness. A concert and a dinner date would be missed, and a man behind me had a flight he wouldn’t catch. But compared to the news that one family would soon be receiving from police at their door, our inconvenience was nothing.

With no roads nearby the relief crew had to walk over a mile along the tracks to reach us. What sights had they seen? It didn’t bear thinking about.

Once the train was ready to depart, the new crew explained to us – again in small groups, that the train would be travelling straight to Haymarket where it would terminate.

“Why can’t it just stop in Kirkcaldy?”, one woman asked, and she was gently told that it was to protect members of the public from “awful things on the front of the train that they wouldn’t want to see”. Of course. Her protest turned to apologies. She just hadn’t thought.

Delay-repay? A donation to charity instead. 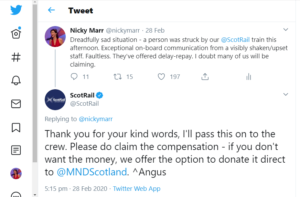 The train arrived in Haymarket two hours late, but without a murmur of complaint. We were repeatedly encouraged to claim back the cost of our tickets under ‘delay-repay’. I commented that I doubted many of us would, but was told there is an option to divert refunds to MND Scotland. It was only £17, but I’ve done that.

I won’t speculate as to why there was a person on the track, but ours was not the only Scotrail train that collided with a person that afternoon. The reaction of the staff was exemplary, but I’ve been told it’s because they are – all too sadly – used to dealing with such situations.

And there’s the tragedy. All I can do is thank Scotrail for the compassion, humanity and care with which they treated us in the face of these dreadful circumstances – far worse for them than for us – and hope that it doesn’t happen again.