I have rarely been so sure I was doing the right thing as I was at 6 o’clock last Sunday morning. I had been harbouring serious doubts about whether I was up to it, but as we cycled through Inverness city centre towards the start line of Etape Loch Ness 2017, my fears began to evaporate.

This was it. I was woefully undertrained and (probably) poorly fuelled, but it felt right to be part of a sea of 5200 fluorescent jackets, lycra trousers and numbered bikes. This was the start line of the challenging 66 mile course around Loch Ness, and strangely, I belonged.

I’m not a complete stranger to cycling, but I am in no way elite. According to my Strava (a cycling and running app which logs your activities) I have cycled about 20 times in the past year. My average pace is usually around 12 mph and my distance will be between 25 and 40 miles. 66 miles (does 106K sound more impressive?) at the required minimum average pace of 13mph was a big ask. But the opportunity to cycle around the most beautiful loch in the world on closed roads, with food stops, enthusiastic marshals and my friend Morag with me all the way – what was not to like?

But I had worried. I’d had sleepless nights about being caught up by the ‘bus of shame’ – although my friend Jinny had told me to ‘hide behind a bush’ and she would come and collect me instead.  Coping with mechanical failures worried me too – it takes me half an hour and a YouTube video to replace an inner tube. And That Hill – the 5 mile steep climb from Fort Augustus. Would there be enough juice in my legs to power me to the top?

I lost Mr Marr before we left Inverness – his legs are stronger than mine – but there was chatter with fellow riders as we ate up the miles. I spoke to a cyclist from Cumbria as the sun broke through the clouds over Aldourie Castle, to another from Norfolk as Urquhart Castle came into view, and to the husband of a former colleague as we rode through Drumnadrochit. Cyclists from Stirling took our photo as we stopped for flapjacks at Invermoriston. It was easy to forget that although categorically ‘not a race’, there was a timing chip attached to my bike and the clock was ticking – we had to press on. 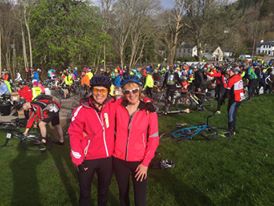 A stop for flapjacks and bananas – and a chat! – at Invermoriston

There were sobering moments – it was alarming to be overtaken by an ambulance under motorcycle escort, and to realise there was an accident ahead. Marshals and other cyclists slowed us down as we approached to allow the pack to pass in safety. At the time of writing I don’t know how the riders are; I wish them a full and speedy recovery. But it was reassuring to know that we were all in safe hands – or in as safe hands as 5200 cyclists could ever be. Of course it’s always better if they’re not needed, but there were medics nearby, and every eventuality had been thought of.

And then The Hill. I knew I was underprepared, and while my will was strong, my legs weren’t. Cramp set in and I had to twice get off and push…but I wasn’t the only one.

‘Is this a cycling sportive or a duathlon?’ I asked other ‘walkers’.

‘It’s a 61 mile cycle with a five mile walk in the middle,’ came the reply. But still there were smiles.

And as I kept reminding myself, this was not a race. My cramp wasn’t the worst I saw, but thank goodness for Vonnie (a far more seasoned cyclist than I am) who stopped to give me a rehydration sachet – the salts set to work and sorted me for the homeward stretch.

And that sachet of Dioralyte embodied the spirit of the Etape for me – and I suspect it’s the same for most of us who were coming in around two-thirds down the field. Cyclists stopped to help others, and there was breath, still, to talk to fellow riders – the Polish guy from Edinburgh who had overdone it at a wedding in East Kilbride on the Friday, and the woman from Kelso who was delighted the wind had dropped. The encouragement from marshals, and locals who had set their alarms to cheer us on, made me feel warm and welcome – the smile of a blanket-wrapped old lady at Temple Pier will stay with me for a long time.

But perhaps the most moving moment was a brief exchange with a bloke I passed on Glendoe Hill. He was wearing a shirt in honour of his organ donor – the person who had died but gifted his heart back in 1999.

‘I like your shirt, mate’ I said, as I overtook him.

That kept me going for the next few miles – thoughts of a man who 18 years later was still honouring the memory of his heart donor, and was still grateful. He might have been pushing his bike – as I was – but there’s no doubt he was looking after the heart that had looked after him.

Will I do it again? Ask me when registration opens for 2018 – I have already signed up for early notification. I absolutely loved the event, the atmosphere, the organisation and the chance to cycle through the stunning scenery of Loch Ness – car free. And I loved the sense of achievement – I’ve done it. And I’ve got the t-shirt. 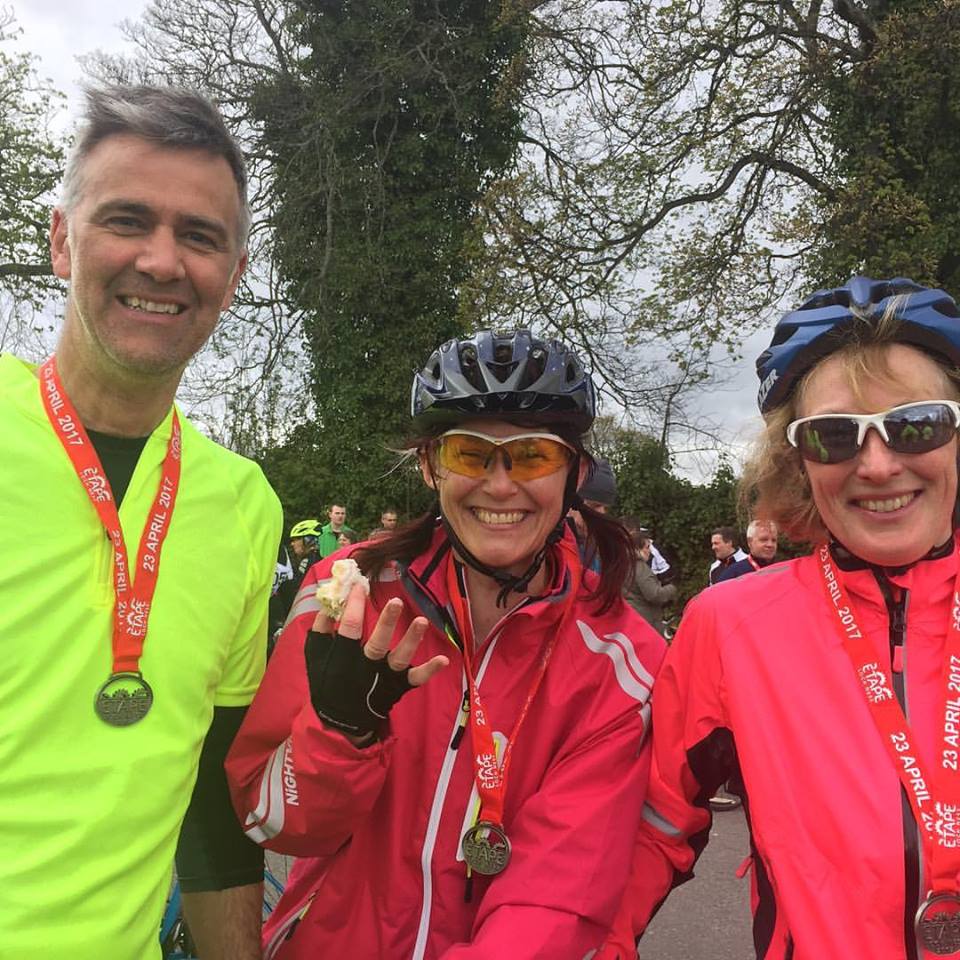