My Papa was a proud man and a cautious man too. A tailor and ‘Gentlemen’s Outfitter’ with a shop in Aberdeen, he was always impeccably dressed in a well-fitted suit, stylish shirt, tie, and matching handkerchief, and hand-made leather shoes. His pride stretched beyond his appearance – he married late in life because he wanted to save up to buy outright the house he took his bride home to; he refused to incur any debt.

Papa came for lunch every Sunday. He arrived in his gold Capri (with black vinyl roof) and brought sweeties and pocket money for us, his grandchildren. These sweeties and coins were shared out meticulously among the three of us, and were the only ones we got all week. We didn’t know it at the time, but these were our first lessons, as kids, in the art of ‘living within our means’. It’s a phrase he was fond of, and a mantra to which he strictly adhered. He only left Scotland for the first time when he sold the shop in his late 60s. That was when he discovered the joys of Caribbean Cruises, and enjoyed the fruits of his hard work and frugal living.

I was reminded of Papa’s ‘live within your means’ mantra as I tried out Highland Council’s new online budget simulator. As with my pocket money in the 70s, so Highland and Moray Council – and others across Scotland – need to budget in order to spend where it most matters. But where my tough choices were between comics, make-up or singles, the choices the councils face have far reaching consequences.

According to the blog written by Bill Fernie, the Budget Leader for Highland Council, in the last six years around £135million has been cut from Highland Council’s budget. The year 2016-17 sees another substantial reduction in funding, and together with increases in costs, the budget gap is around £26million. Decisions on the final budget will be made on 16th February. How last week’s proposed rises in Council Tax – the first in nine years – fit in to the equation is unclear, but every department is bracing itself for job losses and cuts.

And that’s simply not tenable. Every week this paper carries stories of members of our society having been failed because of cuts in the education or social services system. Council houses are not always the standard they should be. Our public buildings are crumbling. Our roads are strewn with potholes and dumped rubbish is allowed to accumulate at beauty spots. And the vast majority of these complaints can be traced back not to a lack of care on the part of the council or its staff, but to lack of resources.

Far from looking to make cuts, it’s clear that to properly fulfil the tasks the council is obliged to undertake, and to provide the services we citizens of the north both deserve and demand, more money is needed, not less. Yes, efficiency savings can always be made, but these will barely scratch the surface.

The Highland Council budget simulator is a fairly blunt instrument. It doesn’t cover the Council’s entire budget, but it does – quite brilliantly – illustrate the breadth of services offered and the difficult choices our councillors will face next month. Further, it allows the public to have their say on the services they would like to protect, or even have enhanced, and the areas where they feel cuts can be made.

And there’s the rub. It’s only when you actually get onto the tool – it’s like a complex online abacus – and start shifting money from one budget to the next, that you realise how vital the services all are. 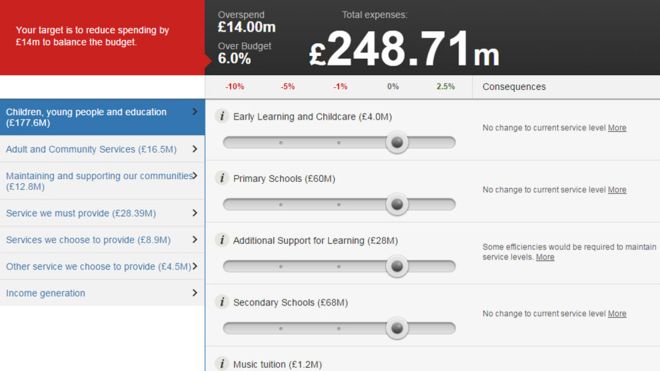 The bulk of council funding goes on children, young people and education. A 10% cut in that budget would balance the books, but at what cost? The simulator spells it out; we’re talking smaller schools and nurseries being closed, class sizes being increased and the scrapping of breakfast clubs. Add to that fewer pupil support assistants for kids with additional needs, and we’ll end up with good teachers deserting the profession and the education of our children and grandchildren being seriously compromised. So let’s ring-fence the education budget, and move on.

Next on the list is ‘Adult and Leisure Services’. There must be something here. Could we pay more for our swimming pools and gyms? Perhaps some of us could. But can we tolerate closure of our libraries and community centres? And what about services to vulnerable adults – Women’s Aid and Mental Health Officers? Already these services are stretched to the maximum. We need to protect the work they do.

I went through each of the itemised options on the online simulator, and I failed miserably to make the required savings. The only sacrifice I was willing to make was with dimming the street-lighting, and only then to let me see the stars through darker skies.

I would never go into politics, and this has only reinforced my position. Something needs to change. Our councils have for too long suffered from lack of proper funding from central government, and tying their hands over Council Tax has only reinforced the dreadful situation we are now in. This online tool demonstrates, more eloquently then any leaflet or speech could, that all the council’s choices are impossible.

No doubt there will be criticisms from all sides when February’s inevitable budget cuts are announced, but before you shout too loudly, try the online simulator for yourself. If you can make the budgets balance, submit your ideas to the council before 5th February. They’ll be glad of your suggestions.

Highland Council’s budget simulator can be accessed at https://highland.budgetsimulator.com/ and is open till Monday 5th February.