January is a month of battles, mainly with the alarm clock when getting up for work and with the hoover, to try and get the last of those pesky Christmas tree needles out of the carpet.

But it’s also a month in which to look forward. The days are already getting longer, there are Easter Eggs on the supermarket shelves, and awards season has officially started, with the Golden Globes winners announced on Sunday. But for once the buzzword after the Golden Globes wasn’t ‘winner’, it was ‘black’.

Black was the colour worn by most of the women in the audience, in solidarity with the #MeToo movement, and to show defiance against sexual harassment in their industry. And black is the colour of the winner of the Cecil B. DeMille Award’s skin – that went to Oprah Winfrey. It won’t surprise anyone that Oprah is black, but I was caught short to hear she was the first black woman to receive the award since it was launched in 1952. No Whoopi Goldberg or Halle Berry? Apparently not.

Oprah spoke passionately about the press and its role in uncovering the truth as we “navigate these difficult times”. The years of abuse and assault that women have suffered in the entertainment industry and elsewhere are still coming to light, and she commended those women who have felt “powerful and strong enough to speak up and share their personal stories”.

Her words were stirring. As befitting an actor of her calibre they were delivered with passion and left me with goose bumps. She had her audience on their feet three times in ten minutes, and the speculation is rife that this was her pitch to stand for president.

But there was one line that Oprah spoke that resonated with me more than the others, and it was this: “What I know for sure is that speaking the truth is the most powerful tool we all have.”

She is right. Without the women who spoke out about their harassment experiences, Weinstein, Hoffman and all would have been there on Sunday night, potentially free to strike again.

But it doesn’t have to be just the big, newsworthy or potentially criminal stuff that we should speak the truth about. Sometimes just being more honest about what we are going through, how we are feeling and in the way we portray our lives can make a difference to the people around us.

It can help to speak up if you are struggling with depression or anxiety. I know this, I’ve struggled with depression in the past, and while it wasn’t easy, I eventually found the words to explain how I was feeling and I got help.

But I was ashamed to admit that I wasn’t coping, so I kept it secret from all but my closest family. To the outside world my life was Disney-perfect, and I had nothing to be depressed about. I didn’t know how to explain it all.

I now know that it doesn’t work like that. Depression is an illness that can affect all of us, just as the flu can, and according to the mental health charity Mind, approximately 1 in 4 of us in the UK will experience a mental health problem each year.

If I’d known that it wasn’t just me who was struggling I probably wouldn’t have worried so much. My recovery might have been quicker; part of my anxiety came from feeling that I was the only one who wasn’t coping. I do now speak up, and openly about my mental health, and more of my friends do too. If we’d understood back then that many of usl felt the same, maybe we could have supported each other better.

And maybe we should all be a bit more truthful on social media too. I know, I’m a chronic over-sharer, and guilty, as most of us are, of editing my life just to show the fun stuff, the impressive stuff, the funny stuff.  And I know I’m not the only one.

Over Christmas and New Year my timelines and news feeds were full of happy groups of smiling faces, full glasses and lovely snowy walks in the woods. Mine was too. But where were the photos of the family arguments? Of the stresses of trying to get the house clean before guests arrived? Of the pressure to find the right gifts, at the right price, and the struggles to make everything ‘picture perfect’ because that’s what everyone on Instagram expects? 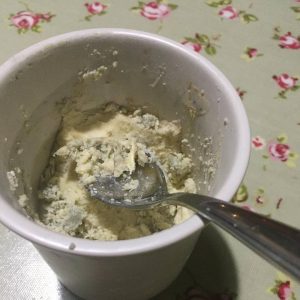 My Stilton. Turns out I *did* post a pic…

Throughout the year we see only flattering selfies and holiday views, and dinners to die for. Tonight I might just have muesli for my solo tea-for-one, followed by the rest of the Stilton. You can bet I won’t be posting a photo of that.

Oprah is a formidable character, a tour-de-force who, who knows, might just make her way to The White House. Stranger things have happened. And she’s right about the power of speaking the truth, both about the big stuff, and about the small stuff too.

So who’s in? Let’s start sharing the truth and almost the whole truth. I say almost…everyone has to have some secrets, don’t they?