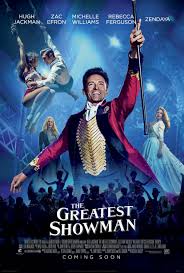 Have you been to the cinema in the past few weeks? Then you might have seen Hugh Jackman’s new musical extravaganza, The Greatest Showman, a biopic which tells the story of man behind one of the world’s best known circuses, PT Barnum.

Jackman plays Barnum, and the feel-good film (did it remind you a bit of Moulin Rouge?) tells the story of how, following the loss of his job, he built his entertainment empire from scratch. Barnum started with a museum of curiosities which housed a flea circus and waxworks, dioramas and taxidermists. To widen the appeal he introduced live exhibits, including dancing bears and a vast aquarium, big enough to stock whales. After the museum burnt down came the world famous circus, which only stopped trading a few months ago.

And although it’s uncomfortable to think of it now, Barnum collected human exhibits and performers for his freak show. It’s a moot point whether the outcasts on his payroll – the bearded lady, the tattooed man, the dwarf, the giant and more – were exploited by Barnum, or liberated from the shadows of 19th century America and given a purpose and an income. It might have been a bit of both. But what is beyond doubt is that his characters became amongst the most famous in the country at the time. Some of them travelled to the UK to perform for Victoria and Albert. 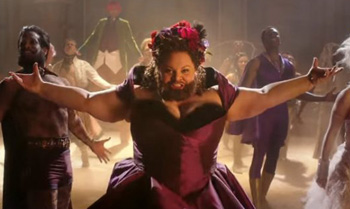 Keala Settle as The Bearded Lady in The Greatest Showman

The film doesn’t trouble itself with the ethics of people with disabilities or unusual physical proportions being sold as exhibits, or with animals being kept in cages and being made to perform. Instead it focusses on the empowerment of Barnum’s human exhibits. The climax of this is a rousing rendition of the film’s theme song ‘This is Me’, sung by the bearded lady and a chorus of her colleagues from the show. The song won a Golden Globe and is heavily tipped for an Oscar.

Each time I have heard the song it has given me goose-bumps; both in the film and in the trailer, and in singer-actress Keala Settle’s moving audition film, which has been widely shared on social media. The song’s lyrics defiantly celebrate all who are different. The song is anthem for diversity. It stands up for those who have been bullied and those who are different:

“When the sharpest words wanna cut me down,

I am brave, I am bruised, I am who I’m meant to be

But no rendition of the song has given me more of a thrill (and a chill) than a short snippet that I watched in bed, on Twitter, first thing on Monday morning. It didn’t star any Broadway musical stars or Golden Globe winning performers. Instead it starred the pupils of Drakies Primary School in Inverness.

At the primary 3-7 school assembly last Friday, head teacher Michelle Watson showed Keala Settle’s audition film as part of a celebration of diversity at the school. It sparked a discussion about each person being equally valid, and each one’s differences being celebrated. To round off the assembly, the pupils got to their feet to join in with the song, and part of their singing was filmed. The 28 second video clip was Tweeted by the school, tagging both the film and Keala Settle. Miss Watson didn’t think much more of it. 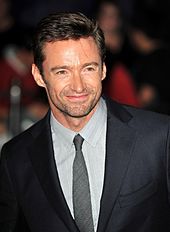 But on Monday morning she woke up to see thousands of notifications on her Twitter account. Her first thought was that her phone must be broken, but no – they were for real. Hugh Jackman, star of the film (and, more importantly for the pupils at Drakies, Wolverine in the X-Men movies), had re-posted their film footage to his own Twitter page, and replied to the school saying:  “Hey @DrakiesPS … you are ALL awesome and unique … and your teachers are too!” Hugh Jackman has over 12 million followers.

When I spoke to her on Monday afternoon, Michelle Watson was still feeling a little overwhelmed. The pupils had gone home on Friday afternoon delighted with the new song they had learned, and many asked their parents to take them to see the film over the weekend. On Monday they were thrilled to learn that their wee Highland school (with a roll of just 232) was being seen across the world. Their short video has been watched tens of thousands of times.

We go through school – and life – with some moments standing out more than others.  I have little doubt that in years to come that the pupils of Drakies Primary will be telling this story to their children and grandchildren.

But even if they don’t remember the moment, or the details of the story, hopefully they will remember the sentiment of the song; that it’s ok to be different, and that each of us, regardless of our height, skin colour, gender, level of ability or body shape, is equally valid.

The only real problem for Miss Watson is that was her first assembly of the year. Where does she go from there? The pressure is on.