The first thing I did on Sunday morning when I woke up was – as usual – reach for my phone. I checked the time, 6.31 – as usual. Peeking out from behind the blinds I could see that the cars below were covered in thick frost. A glance at my weather app showed that it was -5C, due to drop to -6C before dawn.

I was in Edinburgh. I was also still in bed, cosy with warm pyjamas on, under a high-tog duvet in a centrally heated flat. I poked my foot out to check the radiator but the heating hadn’t come on yet. So I turned over, assumed the ‘back to sleep’ position, and dozed for another hour.

Your Sunday morning, give or take the location and timings, probably ran along similar lines. But for 8,000 people from across Scotland, rousing themselves into the new day in the capital’s Princes Street Gardens, or for the estimated 800 people who sleep rough on Scotland’s streets every night, it was a very different Sunday morning.

Their sleep will have been fitful and punctuated by the intense pain that severe cold brings. And while the vast majority of the park sleepers will have been back in their homes within a few hours of waking for a hot bath, a change of clothes, a meal and an afternoon nap, the homeless will have been facing another day of cold, uncertainty, and the constant struggle just to stay alive.

Last weekend’s Sleep in the Park was organised by entrepreneur and philanthropist Josh Littlejohn, whose company Social Bite ploughs 100% of its profits into good causes. Among the sleep-out participants were Jennifer MacKenzie, MD of Highland based company TEFL.org, and six of her staff. By sleeping under the stars on the coldest of nights, they have contributed around £3000 towards the £3.6million the event has raised.

The money will go towards building a village of safe, low-cost houses in a supported environment. The housing gets people off the streets and keeps them warm and safe. The support staff help them learn new skills, find work placements and give employability support. The aim is for people who have been dealt a rough hand in life to be given every opportunity to get jobs, and to become functioning, contributing members of society. In 12-18 months they can move on to make way for new people to be helped.

So what prompted Jennifer and the TEFL.org team to travel down to Edinburgh to take part? The impetus had come from the staff. All had different reasons for wanting to take part, for Jennifer she said it was “seeing so many homeless people in the street, especially in Glasgow, and not knowing what to do and how to help them. People say you shouldn’t give them money and everybody passes judgement. I sometimes give money and I sometimes buy them food and a hot drink – just what I’d buy myself for breakfast. For us as a team this was about raising money, but the experience has affected us all. We learned so much from the experience of sleeping out, and from the people who spoke on the night. We’d all do it again, and we’d force the rest of the team to come with us.” 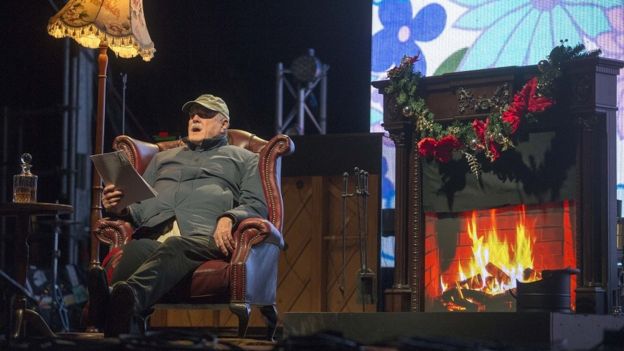 The sleep-out started with speeches, celebrity entertainment and even a bedtime story read to the crowds by John Cleese. The entertainment stopped at around 10.30pm when the TEFL team went in search of food – a £6 Highland Hog Roast roll was welcome, but would have been beyond the budget of a regular rough sleeper.

By 11.30 they began to hunker down for the night, but soon the cold began to set in. The ground was covered by thick insulated plastic sheets and each participant had been given a survival bag. On top of that they placed their own insulated mats and sleeping bags, but it didn’t take long for the ice to penetrate. Even wearing four pairs of socks, Jennifer’s feet were in excruciating pain. Every time she moved a draught sneaked into her sleeping bag. 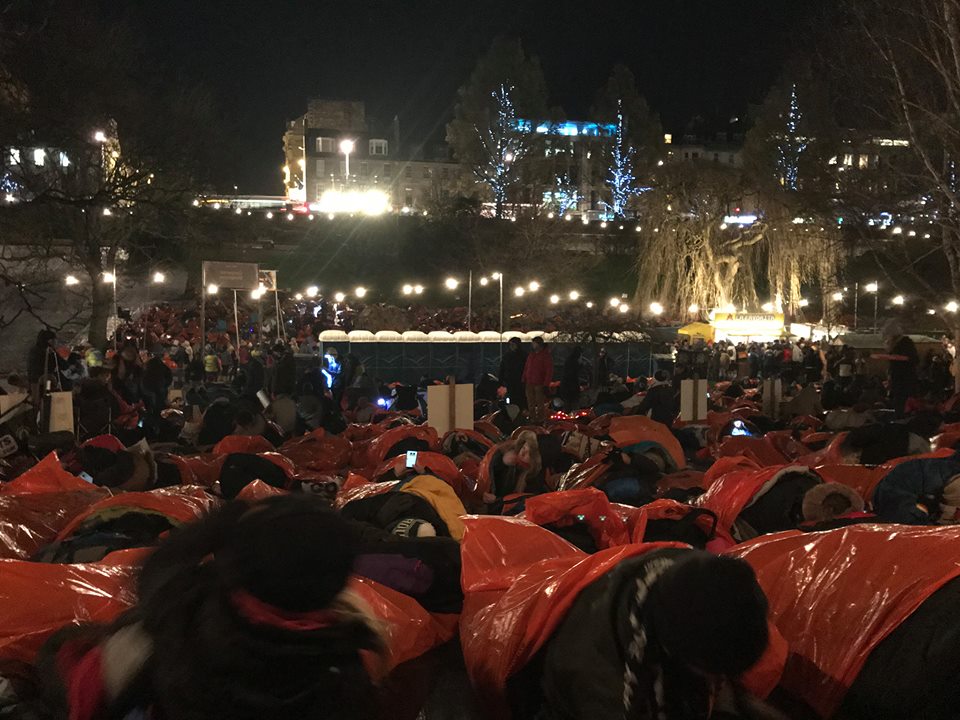 Lying awake and trying not to look at her watch gave her time to think; to contemplate some of the stories from the evening’s speakers. Her conclusions were clear – much of our place in society is down to luck. Some of us are born into supportive families and have every advantage in life. Others will have a tough start and end up failed by parents, carers and the authorities. It’s a matter of chance where we start out, and being lucky doesn’t give us the right to judge others.

As she picked her way through prostrate bodies in the wee small hours in an attempt to kick-start her circulation, she also contemplated a statistic they had earlier been told; the average life expectancy of a homeless woman is 43, and of a homeless man is 47. As a rough sleeper Jennifer probably wouldn’t still be alive. 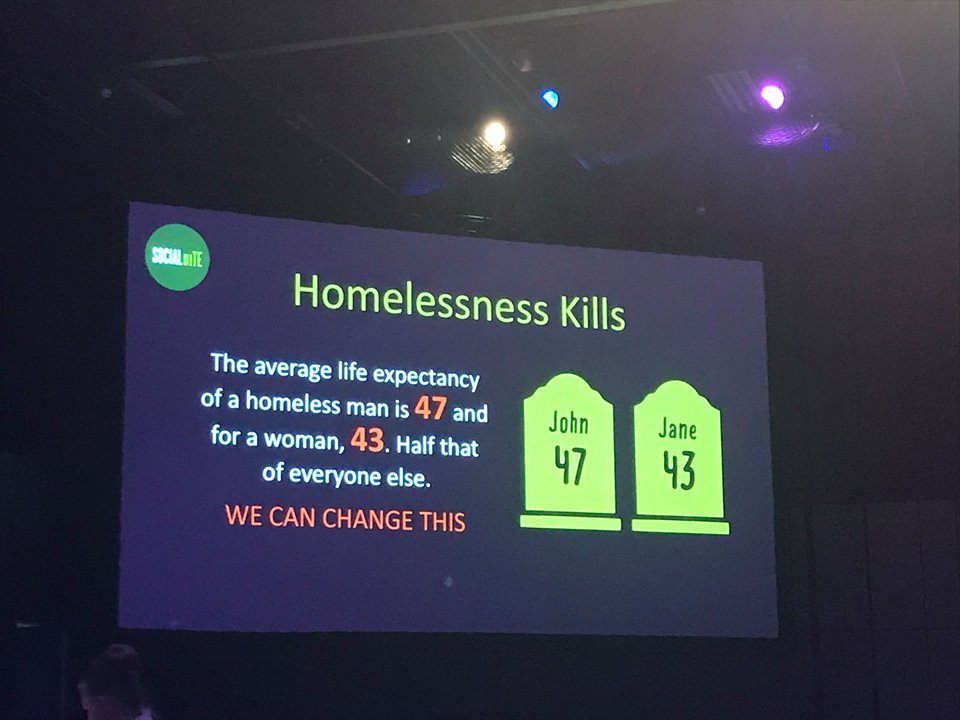 A report for Shelter published this summer suggests there are currently 11,800 homeless people across Scotland. That includes those who are in temporary shelters, B&B accommodation, and sleeping on sofas, in cars or in squats.

11,800 is far too many, but it’s not insurmountable, according to Josh Littlejohn. In his view, it’s not against the wit of Scotland to eradicate homelessness in five years. “Scotland is a small enough country, a compassionate enough country and a collaborative enough country, where nobody has to be homeless here.”

I hope he is right. With people like Jennifer and her team raising funds and awareness, Josh’s goal is one step closer. 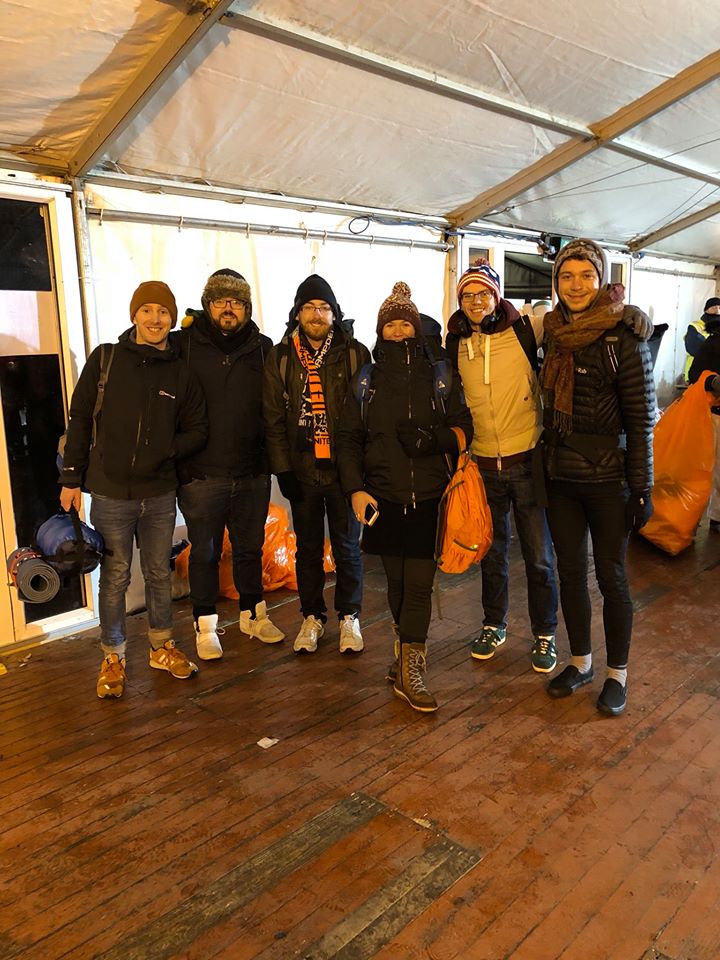 The Tefl.org team on Sunday morning at 6am. Happy because their night in the cold was over.