I could happily survive the rest of my life without ever eating chocolate again, but if you asked me to live without shortbread I’d have to ask you to leave. It’s the perfect Scottish biscuit, and at its best it’s a frugal blend of just fresh butter, sugar and flour, with a pinch of salt for flavour.

Perfect with a cuppa or a dram, delicious served with ice-cream and berries, or perfect as a post-pub snack, my cupboard is never without it, whether shop-bought or home-made.

Mastering shortbread was my first culinary success. I used my Granny’s classic recipe; sugar creamed into butter with a wooden spoon, with sifted plain flour and a pinch of salt worked into the mix. The resultant dough was lightly kneaded till smooth, then rolled thin with a wooden pin and cut into fluted rounds with a metal cutter. And old kitchen fork would prick each round three times to prevent a rise, and the sheets placed into a pre-heated oven until the biscuits just started to turn golden. Then it was out of the oven with them, and while they were still hot I would tip them one by one upside down into the caster sugar tub. They would be left on a wire rack to crisp up as they cooled, before being devoured in a mess of crumbs.

I baked shortbread for my Papa every Christmas and for his birthday, and handed them over in ice-cream tin tubs I had covered with wrapping paper. They always told me they were his favourite presents. It was only many years later that I realised he probably said the same thing about every gift, but at the time it made my heart swell with pride.

Over the years I have occasionally switched recipes, experimenting with additions of cornflour for softness, and semolina or rice flour for added crunch. I’ve dabbled in different sugars too, but the basic three-ingredient version with unsalted butter, golden caster sugar and plain white flour always seems to yield the best results. And rounds. It’s got to be rounds.

But sometimes it’s good to have some variety – and there’s not always time to bake. So I was thrilled when Maclean’s Highland Bakery in Forres delivered a hamper full of their traditional and flavoured shortbread biscuits for me to sample and review. Along with the classic Luxury Shortbread, there were flavoured varieties; Chocolate and Ginger, Butterscotch, Chocolate Chip and Honey. Even a shortbread fan like me couldn’t get through that lot all by myself, so I took them with me on a family get-together to Northumberland and together we reached our verdicts. 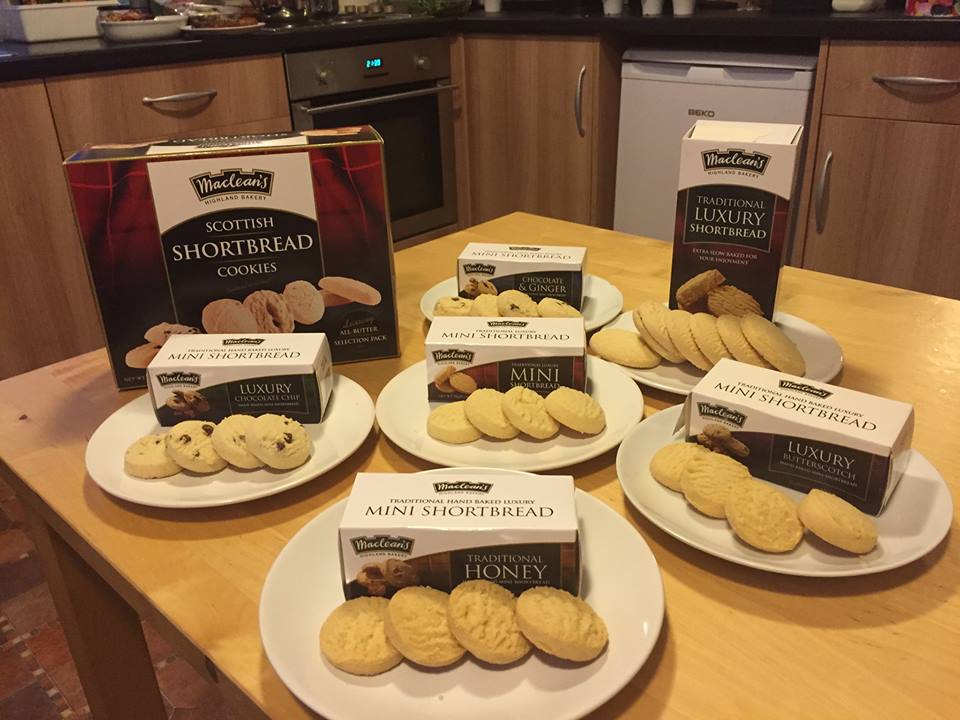 The selection of goodies from Maclean’s Highland Bakery that we tasted.

And the headline result? Maclean’s make mighty fine shortbread. From the ingredients listed on the side of the box it’s clear that they don’t stray too far from the traditional recipe; alongside my granny’s flour, butter, sugar and salt there’s just an addition of maize starch.

There were 24 of us in our family tasting panel, ranging in age from 6 to 70 – and here’s our verdict on the flavours:

Luxury Shortbread – this was soft and crumbly rather than having a ‘snap’ but it was comfortingly buttery and flavoursome in the extreme. It was the resounding favourite of the older generation.

Luxury Chocolate Chip – I’ve mentioned my own ambivalence to chocolate – that didn’t apply to the ten young boys in our company, who polished them off with astonishing speed and enthusiasm. Thumbs up all round! ‘Are there any more, Auntie Nicky?’

Ginger and Chocolate Chip – this got enthusiastic approval from the adults and was the favourite of many. Although the ginger seemed subtle at first it came in with a pleasing after-kick – requests, please for an all-ginger version, perhaps with chunks of stem ginger in place of the chocolate?

Traditional Honey – this was a more moist biscuit than the others, and a few declared it a bit too sweet for their palates; having said that there were none left on the plate!

Luxury Butterscotch – here we felt Maclean’s hit the jackpot. The butterscotch gave a pleasing crunch, and the tiny pockets of sweetness that it created were delicious. Overall, the best of the bunch – our winner!

Thank you, Maclean’s, for the supplies of shortbread and for feeding the 24. And your oatcakes? DELICIOUS!!!