As a student in the mid-80s I spent four months living in a tiny flat in Edinburgh’s Elm Row. The flat had three things in its favour;

I’m not sure I was aware at the time just how influential my ‘local shop’ was, or that it would soon become regarded as one of the best retailers of quality food and wine in the country. Sourcing not only the best Italian goods, it now stocks the best from Scottish producers, boasts an impressive selection of whiskies, bakes its own bread and pastries, and carries an enviable list of Spanish wines. From humble beginnings at the top of Leith Walk, Valvona and Crolla has become a highly priz 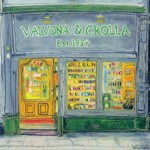 ed institution across Edinburgh and beyond.

It was my habit in my student days to swim three mornings a week. Although the shop didn’t officially open till 9, if the shutters were even partly open, the staff (all Italian, all friendly, as my memory testifies) would happily sell me a fresh pastry, or fill an Italian roll with whatever I fancied from their vast and varying array of cheeses, meats and salads. It was from Valvona and Crolla that I first tasted roasted artichoke hearts marinated in olive oil, and first realised that there was more than one form of ‘garlic sausage’. My post-swim sandwiches were notorious for reeking of garlic. As was I…

I get the feeling that the deli I frequented in 1985 wasn’t much changed from the one that had originally opened in 1934 to serve the migrant Italian community. There was a different aroma every time I stepped inside – sometimes the top note was coffee; at other times it would be prosciutto, or creamy gorgonzola, or salty pecorino. There was always something new to try. On those frugal afternoons when I popped in with a scraped together 48p, I would always leave with something delicious to stir into pasta or spread onto bread. And I was never made to feel unwelcome, or less important, than their better heeled customers.

We left Edinburgh 18 years ago, just as the next generation of the Contini family began a serious expansion of Valvona and Crolla. The Caffé Bar opened at the rear of the Elm Row deli in 1996, to be followed by a smart two-storey Vin Caffé and Ristorante in Multrees Walk. There, it holds its own amongst designer neighbours Louis Vuitton, Harvey Nichols and Hugo Boss. There has been a further expansion of the empire into the foodhalls of Jenners and House of Fraser, the introduction of an outside catering arm, and now an online shop. And that’s before we even start with Mary Contini’s glittering media career, writing cook books and memoirs, and appearing on TV and radio.

To be honest, on my too infrequent trips back to Edinburgh, I flit amongst them all. But it’s at the Elm Row deli where I feel most at home, winding through between the sky-high shelves on the left and the refrigerated counters on the right, round the corner, threading among the wine bottles, to reach the stairs to the sunny yellow Caffé. The staff are always smiling – and who wouldn’t be happy working there, surrounded by such treasures, such tastes.

The coffee is delicious – it’s easily the best cappuccino in town. On the way out I choose my packages with care – a few slices here, a couple of hundred grams there, and a treat to eat on the train home. And that, and to inhale deeply and to savour the atmosphere, is enough to sustain me between visits. 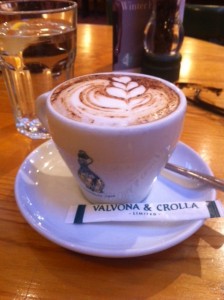 This post is part of a series commemorating 2015 as Scotland’s Year of Food and Drink.

If you know of a product, an ingredient or a food hero you think I should be featuring, please get in touch…email me, send me a Tweet, or comment on my Facebook page.